How's this helping anyone get to Mars? 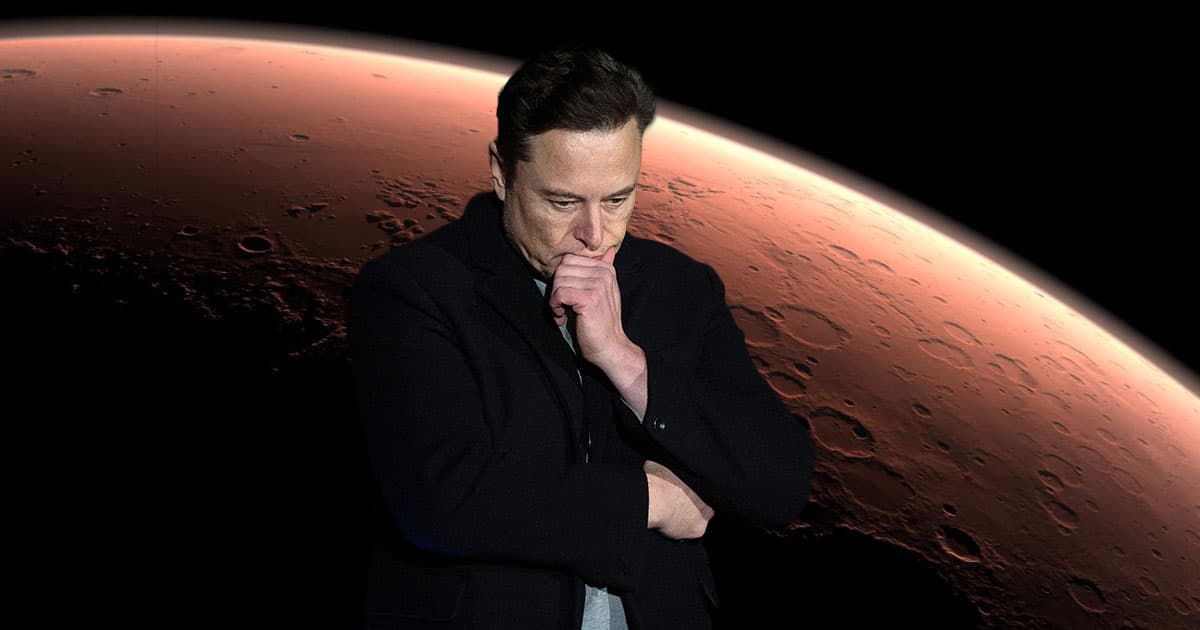 After news emerged that Twitter was accepting Tesla and SpaceX CEO Elon Musk's offer to buy the company, the site's now-departed founder Jack Dorsey weighed in on the acquisition.

"In principle, I don’t believe anyone should own or run Twitter," he wrote. "It wants to be a public good at a protocol level, not a company. Solving for the problem of it being a company however, Elon is the singular solution I trust. I trust his mission to extend the light of consciousness."

That last line by Dorsey, who stands to benefit immensely from the deal, was an invocation of a phrase sometimes employed by Musk himself to characterize his motivations and, when convenient, bolster his own business interests.

Back in 2020, for instance, Musk said that SpaceX's Starship rocket — that's the mega-ambitious, still-in-development spacecraft that Musk says is necessary for the survival of the company — was the "key to making life multiplanetary" and "protecting the light of consciousness."

In Muskworld, that makes perfect sense: the plan is that a whole fleet of Starships will take to the skies like an interplanetary conveyer belt, moving countless brave settlers and tons of cargo to the Red Planet, where they'll set up splendid dome cities that'll fulfil Musk's hankering for retro scifi tropes while acting as the ultimate spacefaring insurance plan against disaster back here on Earth.

On paper, that all sounds pretty awesome. But it does raise the inevitable question of why Musk is now investing humongous amounts of resources in something as clearly earthbound as a messy, controversial social media platform.

The entanglement is almost certain to distract him from his space exploration goals at SpaceX and environmental aspirations at Tesla, and that's on top of existing boondoggles like his perennially underwhelming Boring Company.

And that's to say nothing of the financial commitment. On the heels of his early ventures Zip2 and PayPal, Musk found himself with a large pile of money — somewhere in the low hundreds of millions, for those keeping score — and immediately shoveled almost all of it into SpaceX, which was seen at the time as an extreme longshot that was almost certainly destined for fanfare.

Now, largely thanks to the success of Tesla, Musk has a much, much larger pile of money. Instead of being a millionaire, now he's the wealthiest billionaire on Earth, by a significant margin.

In 2002, he had a fraction of those resources and he poured them into SpaceX. It earned him widespread ridicule, but now that the company is routinely ferrying astronauts to and from the International Space Station, he's gotten the last laugh.

So what's changed? Now, instead of having hundreds of millions of dollars to back his vision with, he has tens of billions. That could buy a lot of Starships, or electric cars, or solar panels. It might even be enough to save Neuralink, another of his more headscratchy ventures.

But instead he's buying the bird site, in a move that's almost certain to thrust him into a bunch of insufferable and deranged controversies.

In principle, Musk has said that the acquisition is motivated by a desire to promote "free speech" on the platform, though the reality is that he's often done everything in his power to keep his employees and enemies from speaking freely. One reasonable interpretation? Musk just hasn't thought the whole thing through very much.

At his best, Musk can be a strikingly effective and even occasionally inspiring entrepreneur, guided by an eye on the distant horizon. At his worst, he can spread himself too thin and demonstrate a childlike inability not to get sucked into whatever pointless feud catches his eye.

And lately, we've been seeing a lot more of the latter.

Read This Next
A Sip of Opal
NASA Discovers Precious Gemstones on Mars
Shot Well
Head of NASA Relieved to Hear Elon Musk Isn't REALLY Running SpaceX
Martian Oases
Scientist Proposes Growing a Forest Inside a Bubble on Mars
Big Impact
Meteorite Hit Mars So Hard NASA Thought It Was a Quake
Makeover Scene
Space Tourist Says He's Thinking About Flying SpaceX Craft Up to Fix Hubble
More on Off World
Trashing Orbit
Yesterday on the byte
Elon Musk Says SpaceX May Build Starship That Dies on Purpose
Cat and Mouse
Yesterday on the byte
SpaceX to Launch "Hunter" Satellites for Targeting Rival Spacecraft
Space In Space
Yesterday on the byte
NASA Official Admits There's a Bit of an Issue on the Space Station
READ MORE STORIES ABOUT / Off World
Keep up.
Subscribe to our daily newsletter to keep in touch with the subjects shaping our future.
+Social+Newsletter
TopicsAbout UsContact Us
Copyright ©, Camden Media Inc All Rights Reserved. See our User Agreement, Privacy Policy and Data Use Policy. The material on this site may not be reproduced, distributed, transmitted, cached or otherwise used, except with prior written permission of Futurism. Articles may contain affiliate links which enable us to share in the revenue of any purchases made.
Fonts by Typekit and Monotype.