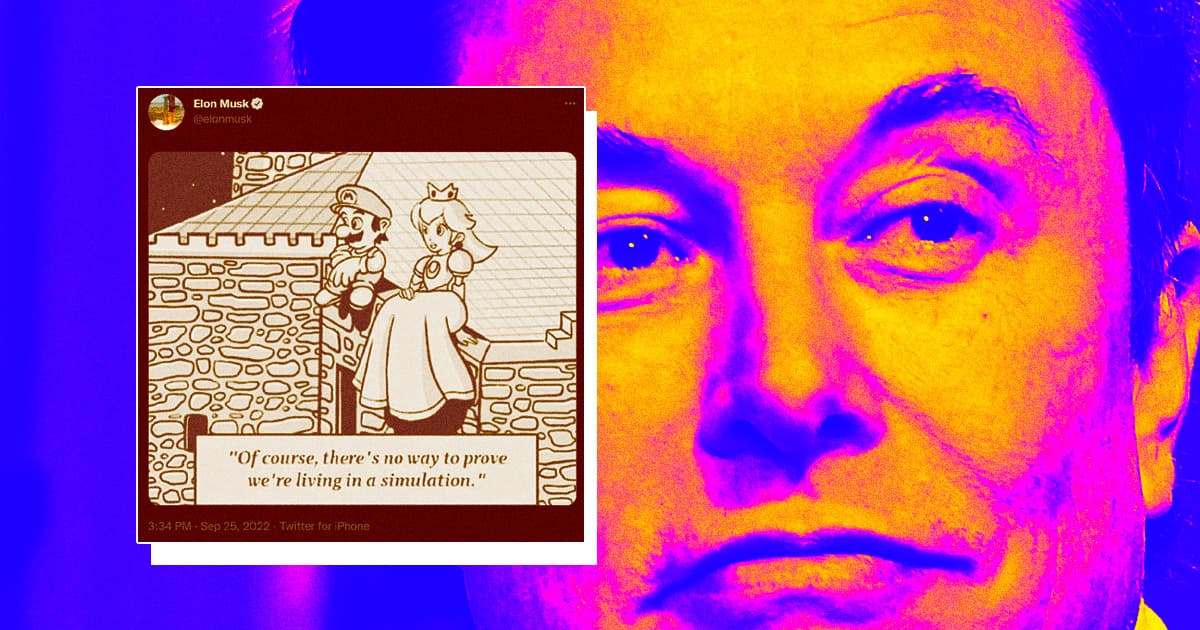 For a captain of industry, Elon Musk sure has interesting ideas about intellectual property.

This week, the world's richest man tweeted a black and white comic that depicted Nintendo's Mario and Peach characters sitting on the roof of a building discussing life.

"Of course," the text reads, "there's no way to prove we're living in a simulation."

It's a moderately funny joke — two videogame musing about whether they do in fact live in a virtual world — and it also riffs on Musk's longstanding interest in the theory that we, like Mario and Peach in the comic, might live in a simulated universe.

But the authorship of the comic raises issues far more banal. Musk has long been known to post memes without credit, and this was no exception. Except that this time, instead of just calling him out, Futurism was actually the victim of the heist.

Yes, folks — the comic Musk tweeted out, gaining hundreds of thousands of engagements, was an illustration from our now-defunct Futurism Cartoons.

In fact, on the top of the original image are watermarks crediting Futurism and the authors of the comic, Luke Kingma and Lou Patrick Mackay. In the version Musk posted on Sunday, both credits were cropped out.

Elon Musk just stole one of our cartoons lol pic.twitter.com/xkOeMx1g6Z

Look at how he cropped the credit out pic.twitter.com/pj7FSuCJyT

This is far from the first time the SpaceX and Tesla CEO has stolen meme art from the little guys. Over the last year alone, Futurism has published at least two blogs about memes he seems to have lifted.

So prevalent is Musk's meme-stealing propensity that the New York Times ran a whole exposé on it last year, questioning whether the father of nine to ten children actually lives up to his "meme lord" representation.

Musk's laissez faire attitude toward crediting others' work extends beyond memes as well. Back in 2018, it emerged that Tesla had using an image by a smalltime artist to show off new tech in its vehicles without credit or compensation.

Called out for the oversight, Musk was stridently unapologetic.

"He can sue for money if he wants, but that’s kinda lame," he said in response. "If anything, this attention increased his mug sales."

In a certain light, Musk's meme theft makes perfect sense. On a meta level, rich people often steal even when they have no rational reason to do so. Musk has also dealt with the accusation of lifting much larger ideas as well, including Tesla itself.

That said, it's particularly weird — and even a little sad — that the richest guy on the planet feels like he has to pilfer some of the lowest-hanging fruit of the meme world when he could hire the world's best content creators — or at very least, the prolific alleged meme stealer FuckJerry — to make him the dankest memes the world has ever seen.