Chinese Scientists Say They May Have Detected Signal From Extraterrestrial Intelligence, But Probably Not

"This is interesting, but don't get too excited." 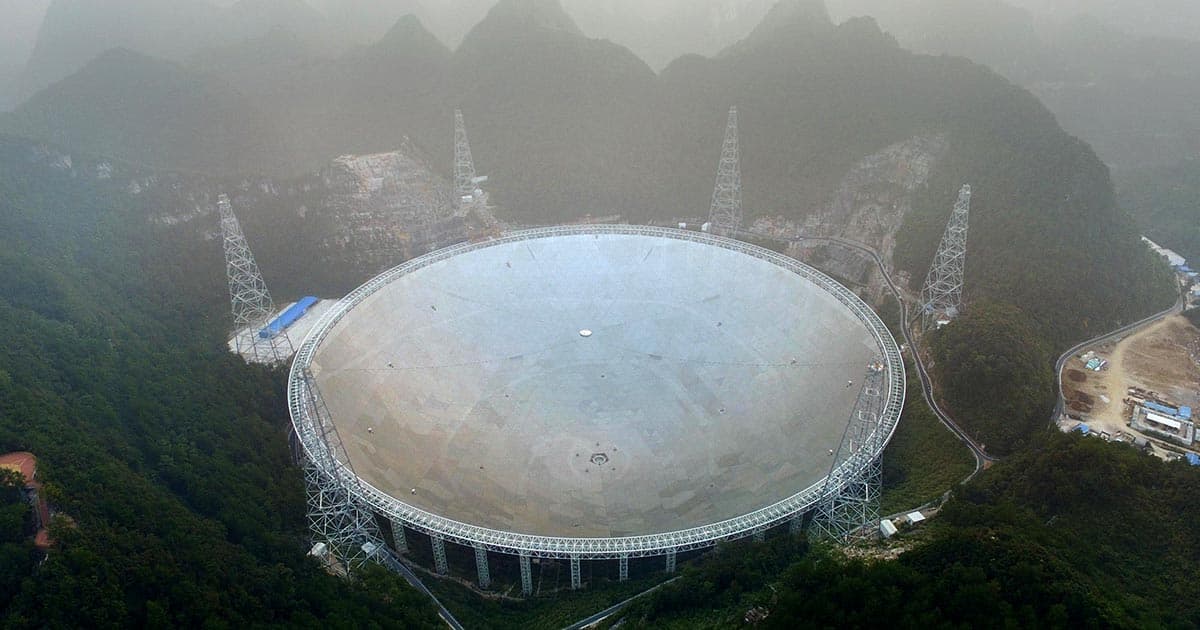 Image by AFP / STR / China OUT

Update: After we ran this story, we tracked down one of the researchers behind the research for an interview. His take? It's definitely not aliens.

It's not every day that scientists affiliated with a major research institution make sweeping claims about a potential first contact with an extraterrestrial civilization.

A team of Chinese scientists scanning distant exoplanets for signs of life say they've found "suspicious signals" that could point toward an extraterrestrial civilization, according to a report by Science and Technology Daily, the official newspaper of China's Ministry of Science and Technology. But they're urging caution while they examine the findings.

"The possibility that a suspicious signal is some kind of radio interference is also very high, and it needs to be further confirmed and ruled out, which can be a long process," Zhang Tongjie, chief scientist of China ET Civilization Research Group told the paper, as translated by Google.

The scientists found the unusual narrowband signals when processing 2019 data obtained by the Five-hundred-meter Aperture Spherical Telescope (FAST), a gigantic alien-hunting radio telescope located in southwest China, which also happens to be the biggest of its kind in the world.

While the claim is obviously immense, the researchers were quick to point out there may be simpler explanations for the signals as well. Besides, we should take these statements with a grain of salt as we have yet to see a scientific paper, let alone a peer review.

"This is interesting, but don't get too excited," SpaceNews journalist Andrew Jones tweeted.

The massive FAST telescope is better suited at the task of looking for alien civilizations than the recently collapsed Arecibo Observatory in Puerto Rico, a former radio telescope that has been used to probe the night sky for signs of intelligent life in the past. That's because it is larger, twice as sensitive, and is able to accept signals from a much wider swath of the sky thanks to its 19-beam receiver, Tongjie argued.

"[The FAST telescope] will repeat observations of suspicious signals that have already been discovered to further identify and detect new signals," Tongjie added.

Despite the caveats, the team is already excited about the possibility of confirming the potentially world-altering discovery — or rejecting it, of course.

"We look forward to the [FAST telescope] being the first to discover and confirm the existence of extraterrestrial civilizations," Tongjie told the paper.

But there's another big problem that could stand in the way of the team confirming we've actually made first contact: a packed schedule.

Peng Bo, a researcher at the National Astronomical Observatories, confirmed to the paper that he believed the suspicious signals were likely of alien origin, "but we don't have time to identify it."

More on ETs: Study: There May Be as Many as Four Evil Civilizations in Our Galaxy

Read This Next
Make It Rain
Scientists Say They Caught China Successfully Changing the Weather
Loeb Love
Harvard Astronomer Argues That Aliens Visited Us in 2017
Loeb Strikes Again
Harvard Astronomer Says We Should Hunt for Alien Probes
Phone Home
SETI Institute Admits That Proxima Centauri Signal Is Very Strange
Alien. Cargo. Moving. Energy. Beams.
Harvard Prof: Deep Space Signal May Be From Alien Civilization
More on Hard Science
It From Bit
Nov 22 on the byte
A Scientist Is Crowdfunding an Experiment to Check if We Live in a Simulation
Water Carrying
Nov 20 on the byte
Evidence Grows That Soggy Meteorites Gave Earth Its Oceans
Shroom News
Nov 20 on the byte
Scientists Build Circuit Boards Based on Mushrooms
READ MORE STORIES ABOUT / Hard Science
Keep up.
Subscribe to our daily newsletter to keep in touch with the subjects shaping our future.
+Social+Newsletter
TopicsAbout UsContact Us
Copyright ©, Camden Media Inc All Rights Reserved. See our User Agreement, Privacy Policy and Data Use Policy. The material on this site may not be reproduced, distributed, transmitted, cached or otherwise used, except with prior written permission of Futurism. Articles may contain affiliate links which enable us to share in the revenue of any purchases made.
Fonts by Typekit and Monotype.