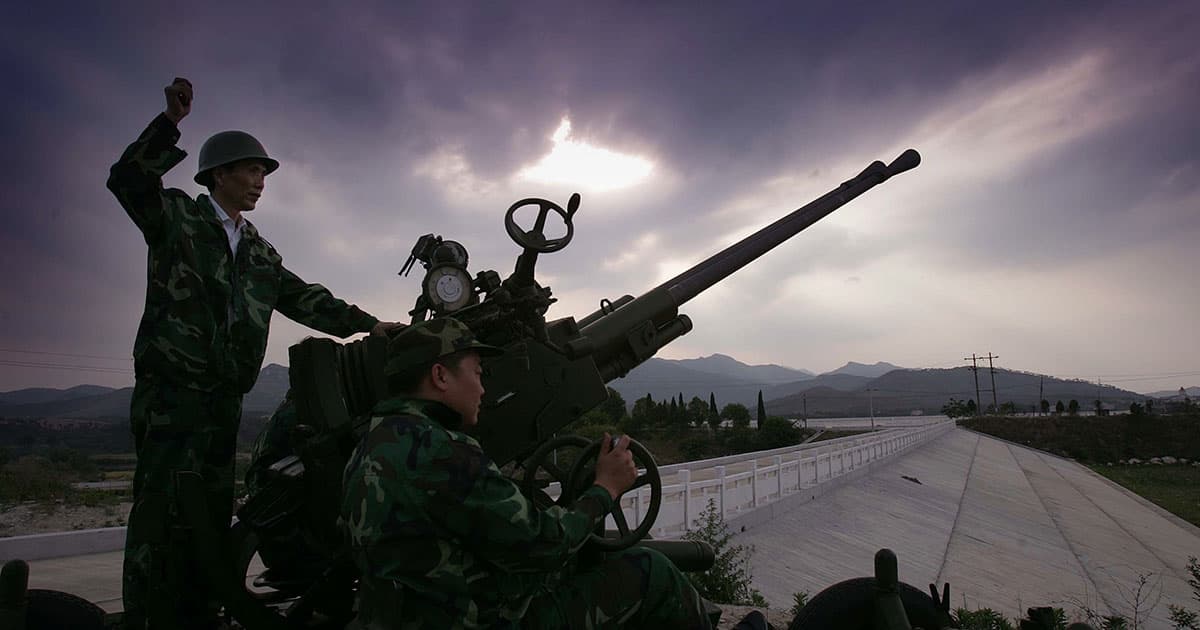 Image by STR/AFP via Getty Images

China has succeeded in literally changing the weather, a new study claims.

As the South China Morning Post reports, researchers say that during the Chinese Communist Party's centennial celebration over the summer, weather authorities successfully modified the weather above Beijing to clear the sky and reduce pollution for the tens of thousands gathered for a commemorative ceremony in Tiananmen Square.

They did so using cloud seeding technology, a long-studied but controversial process that involves shooting silver iodide particles into the clouds, with the idea of attracting water droplets to modify the weather.

The paper, by researchers at China's Tsinghua University, comes a year after reports that China was dramatically expanding its weather modification program to a test area of a whopping 5.5 million square miles by the year 2025. As Futurism noted last December, that's bigger than the entire country of India, and could end up raising serious issues with China's neighbors.

Though this isn't the first time China has used cloud-seeding technology — it's been dabbling since as early as the months leading up to the 2008 Beijing Olympics — this appears to be both one of the most successful and also largest-scale tests conducted not just by the CCP, but in the world.

It was also not publicized, and part of the Tsinghua researchers' paper focused on the evidence they found that cloud seeding had actually taken place, which included eyewitness reports of rockets being launched into the sky from the mountains outside of of Beijing before the July 1 centennial, and accounts of rocket debris after the fact.

According to the SCMP, there were a number of hurdles that weather officials had to jump to have successfully changed the weather. Pollution leading up to the CCP centennial was especially bad, the report noted, and it was China's wettest recorded summer as well. Nevertheless, reports indicated that Beijing's pollution on July 1 went from "moderate" to "good," and the mid-day rain did in fact appear to be artificial.

Though areas of the United States and other countries have tried to use cloud seeding technology to change the weather, professional China-worriers have expressed concern that the CCP may use it for nefarious military ends — even though the US military has been trying to make it rain since at least 1967.

This successful and large-scale operation in Beijing does, however, raise important questions both about potential military usage of the tech. If one country is able to control its own weather, it could in theory do so elsewhere — which is unwelcome news for anyone who isn't invested in forever wars.

Moreover, while cloud seeding is often touted as a potential solution for the megadroughts of the not-so-distant-future, the technology hasn't been successful for long enough to measure how it affects natural weather patterns, nevermind its impact on climate change.

For now, though, let's just marvel at the fact that it now seems possible to literally make it rain on command.

More on cloud seeding: A Bunch of US States Are Now Using Weather Modification Technology

Read This Next
Whack-an-Alien
Chinese Scientists Say They May Have Detected Signal From Extraterrestrial Intelligence, But Probably Not
Meet Garlic
Chinese Firm Wants to Give Cloned Pets the Original's "Memories"
Greater Good
China Isn’t Afraid to Be the "Bad Guy" of CRISPR Research
This Week in Tech
This Week in Tech: Oct 27 – Nov 2
Futurism
Unexplained "Sonic Attacks" Were Reported In China. Here’s What We Know.
More on Hard Science
Warped Tour
Feb 2 on futurism
Professor Believes Door to Warp Drive May Lie With Ethylene Glycol
Sky Bursts
Feb 2 on the byte
Astronomers Intrigued by 25 Mysterious Repeating Radio Signals From Deep Space
Tractor Beam
Jan 26 on the byte
Scientists Build Working Tractor Beam, Although It's Comically Tiny
READ MORE STORIES ABOUT / Hard Science
Keep up.
Subscribe to our daily newsletter to keep in touch with the subjects shaping our future.
+Social+Newsletter
TopicsAbout UsContact Us
Copyright ©, Camden Media Inc All Rights Reserved. See our User Agreement, Privacy Policy and Data Use Policy. The material on this site may not be reproduced, distributed, transmitted, cached or otherwise used, except with prior written permission of Futurism. Articles may contain affiliate links which enable us to share in the revenue of any purchases made.
Fonts by Typekit and Monotype.