China is Using Drones Equipped With Flamethrowers for an Unexpected Purpose

It seems dangerous, but it's actually safer than the alternative. 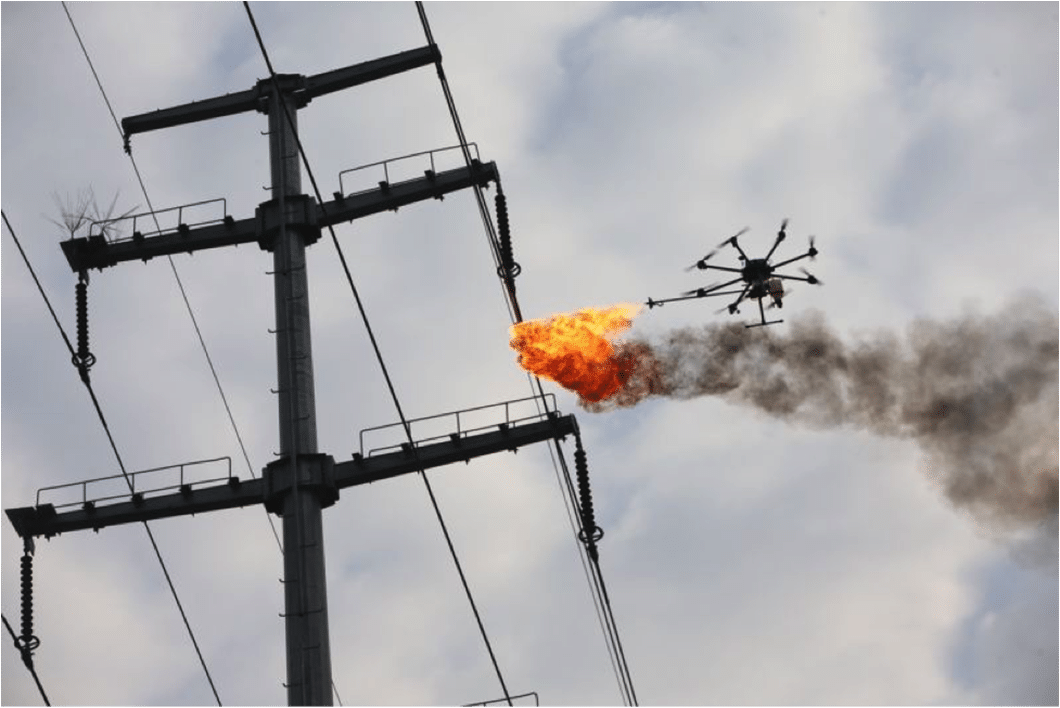 Year after year, we witness drones becoming more multifaceted in functionality. From artificial pollination to performing at halftime during the Super Bowl – drones have become just as diverse as the society that created them. This is now truer than ever, as China has recently equipped drones with flamethrowers for the benefit of the public.

A power company in Xiangyang, China has established a hot, new way to clean power lines. Rather than having people try to reach the far corners of the city scraping off caked-on debris that's been lodged in hard-to-reach-spots, the power company will now have drones perform this task.

While this seems dangerous, the use of drones seems to actually be safer than the previous protocol. Before, maintenance workers would risk their lives to clean power lines, climbing upwards of 10 meters (32 feet) into the air while risking electrocution with each step. While the use of a flamethrower may require more frequent cable replacements, the metal power lines will not be harmed by the flames.

The 11kg drones have officially made their fiery debut, reminding us that while this might mean fewer maintenance jobs, technology, and flamethrowers, can improve safety.

Read This Next
FROM THE DEPT. OF THINGS TO BUY
The Best Science Gifts of 2023
Quantum Supremacy
US Sanctions Chinese Quantum Computing Firms for... Reasons
Quantum Solutions
Chinese Scientists Say They Now Have the World's Most Powerful Quantum Computer
Drone Tanker News
The US Navy Just Used a Drone to Refuel a Fighter Jet in Midair
Rock 'Em Sock 'Em
The Head of US Space Command Fears China's Giant Robot Arms
More on Robots & Machines
Blow Up Doll
Monday on the byte
Ukraine Accuses Russia of Using Inflatable "Dummy Tanks," Which Deflated
From the Dept. of...
Monday on futurism
The Best UPS Battery Backups of 2023
FROM THE DEPT. OF...
Jan 29 on futurism
The Best Netgear Routers of 2023
READ MORE STORIES ABOUT / Robots & Machines
Keep up.
Subscribe to our daily newsletter to keep in touch with the subjects shaping our future.
+Social+Newsletter
TopicsAbout UsContact Us
Copyright ©, Camden Media Inc All Rights Reserved. See our User Agreement, Privacy Policy and Data Use Policy. The material on this site may not be reproduced, distributed, transmitted, cached or otherwise used, except with prior written permission of Futurism. Articles may contain affiliate links which enable us to share in the revenue of any purchases made.
Fonts by Typekit and Monotype.