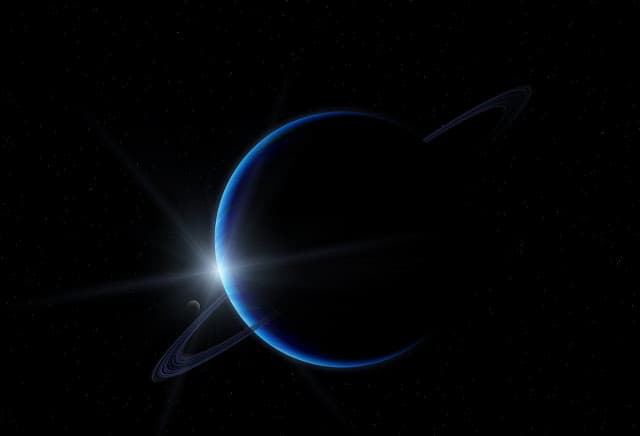 Planets, like stars, are incredibly diverse, existing in all different sizes and classifications. Of course, we have small planets (like Mercury and Mars), large planets (think Jupiter and Saturn), and planets that lie within the happy medium. Earth is one of those planets, but it's still on the smaller end of the spectrum. Beyond Earth, we have mega and super-Earths. Beyond them, we have medium-sized gas giants, like Neptune and Uranus — planets composed mostly of gas that lurk within the icy confines of the outer solar system. They, however, seem to be a rarity. By far, the larger planets seem to outnumber the small (though admittedly, the larger the planet, the easier it is to find).

Now, an international team of researchers — led by Radek Polesky, from the Ohio State University — have seen a semblance of home in a far away planetary system situated more than 25,000 light-years from Earth. The planet — which, as they describe it, is part gas and part ice — shares many attributes of both of our ice giants.

In fact, this planet is purportedly their twin (minus the fact that it's about four times heavier), but given the vast distances involved, there are some holes in our knowledge. Namely, we have no idea what this planet's atmosphere is composed of. With Neptune and Uranus, the large concentration of methane in responsible for their signature blue hue, therefore, the new planet might not resemble them in color (also no word on whether or not it rains diamond). However, we do know one very important thing; how far it is from its parent star. The distance is said to be identical to that separating Uranus and the Sun.

Oh, and further complicating the system's dynamics, this newly-discovered planet orbits a star that orbits another star (meaning, this is a binary star system with an orbiting planet). The first star is about 2/3rds as massive as the Sun, while the second is much smaller, weighing just a sixth of the mass of the Sun. It, however, is still close enough to perturb the ice-giant's orbit, throwing a wrench in its delicate orbital dance.

According to Andrew Gould, a professor of astronomy at Ohio State University, the importance of this planet's discovery is two-fold. It might also help solve integral mysteries about the outermost ice giants of our solar system. He explains,

“Nobody knows for sure why Uranus and Neptune are located on the outskirts of our solar system, when our models suggest that they should have formed closer to the sun,” Gould continued. “One idea is that they did form much closer, but were jostled around by Jupiter and Saturn and knocked farther out.” (This same phenomenon could have ejected a now-rogue planet that once belonged to our solar system)

“Maybe the existence of this Uranus-like planet is connected to interference from the second star,” he finished. “Maybe you need some kind of jostling to make planets like Uranus and Neptune.”

The Ohio State University also divulges how the discovery was made: