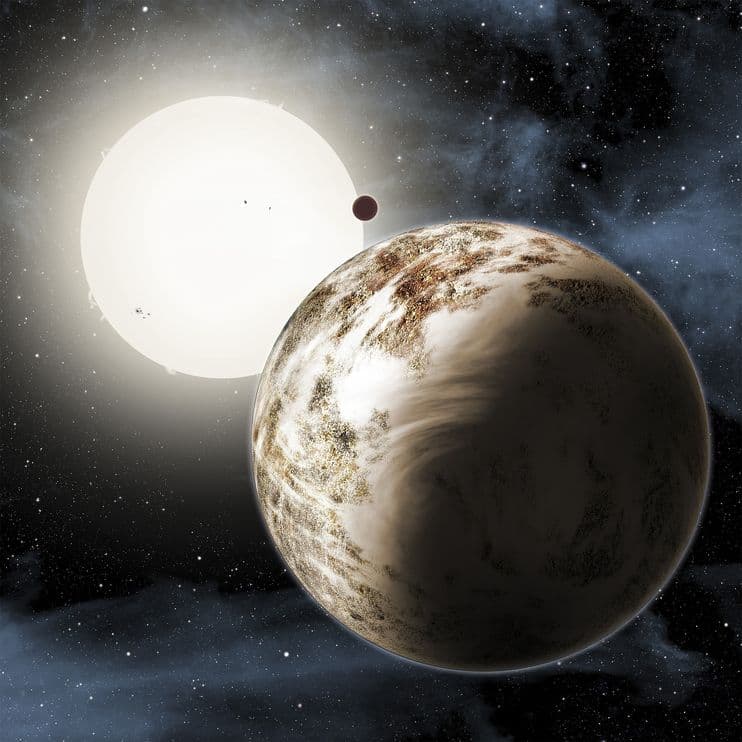 Ever since the Kepler Space Telescope first went online, astronomers have uncovered a diverse collection of exotic extrasolar planets. While no two have been exactly alike, pretty much all of them fit under general classifications.

From large to small, we have the following types (and some key details for each one):

Recently, astronomers announced that they have found a baffling planet that doesn't fit any of the above classifications, resulting in the creation of a new one category, rightfully called "Mega-Earth" exoplanets.

The new Mega-Earth - found approximately 560 light-years from Earth in the constellation of Draco - weighs the combined equivalent of 17 Earth-sized planets. Strangely enough though, it's merely 2.3 times larger in radius (or about 18,000 miles/29,000 kilometers across).

Such an observation indicates that the planet is comprised almost entirely of rock and other heavy compounds. It also seems to be lacking any kind of a gaseous envelope all together, which is perplexing in and of itself.

During the formation of planetary systems, baby-stars generate huge protoplanetary disks. Inside of them, planetesimals accrete material until they acquire enough mass to develop and retain layers of gaseous material, creating a remedial atmosphere. Then, depending on the ratio of rocky material and gas accreted (along with the quantities), the planetesimals evolve into either terrestrial planets or gas-giants (like Jupiter and Saturn).

According to , Dimitar Sasselov - one of the researchers - who hails from the Harvard-Smithsonian Center for Astrophysics:

"It's very difficult to put together a large solid planet like this without accreting even a small amount of hydrogen and helium, which is there in the disk."

In order to determine how the planet formed, the team looked into various scenarios. One such scenario posits that Kepler-10c was created when two large, but barren terrestrial planets collided during the chaotic first years following the birth of the planetary system the sun-like star birthed.

Other than Kepler-10c, which was actually first noted back in 2011, the star also hosts another planet; a  "lava world" called Kepler-10b (at the time, it was the first rocky planet ever found beyond our solar system). The former completes one orbit around its star every 45 days, while the latter makes one in just 20 hours.

The orbital period was pretty much all we knew about either planet. That is, until the researchers took a closer look at the speed at which the planets travel around their star, which helped them determine how heavy they are and, as a result, what they are made of.

Given the fact that the universe seems to have a preference for creating large, mostly-gaseous bodies (at the very least, the larger planets are much easier to find). the discovery of Kepler 10-c shows that the universe started churning out terrestrial planets much sooner than originally thought, which increases the odds of intelligent life thriving on older planets.

The planet itself orbits a star that is old enough to have achieved enough stability for life to get a solid footing, with it having formed less than 3 billion years after the big bang (making it about 11 billion years old). During this epoch, the universe was composed mostly of hydrogen and helium. The heavier material didn't pop in util several of the first generations of stars died and seeded the interstellar medium with the rocky material needed for terrestrial planets.

However; that's not to say that Earthlings could ever venture to Kepler-10c and come back in one piece, as the immense mass of the planet also leads to intense pressures on its surface.

Regardless, the HARPS-North instrument (short for "High Accuracy Radial velocity Planet Searcher for the Northern hemisphere") will likely help us identify even more worlds that are similar to Kepler-10-c.

The findings were recently announced at the "American Astronomical Society" meeting in Boston, MS.