Kepler 78b: The Demon Planet 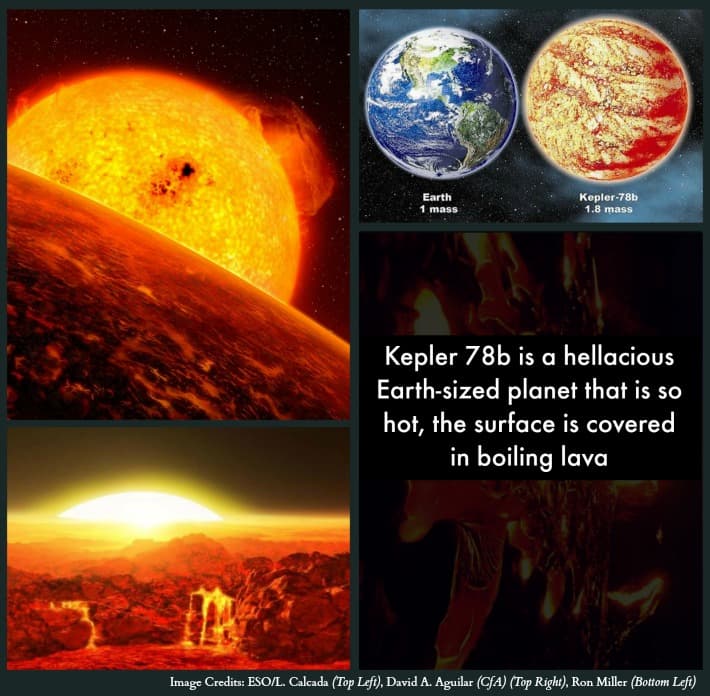 We didn't even discover Pluto (the trans-Neptunian dwarf planet) until 1930. What's more, we still don't have a comprehensive map of our own solar system, so it's no surprise that finding planets outside of our solar system is a bit tricky (and that's putting it mildly). However, recent technological advancements have allowed us to refine our planet tracking abilities. As a result, we are discovering exoplanets right and left and, well, all across the cosmos really. In fact, Kepler recently released a whole catalog of new exoplanets (you can read about some of them here).

I would like to take this time to nominate Kepler 78b to receive the "most unpleasant terrestrial planet to live on" award (high honors, indeed). One of the most notable features of this planet is its 8 ½ hour year. That's right, Kepler 78b completes a full orbit around its parent star in just under 9 hours. Every time you go to bed, you wake up in a new year. You go to work one year, and you go home the next (talk about a long 'year' at the office).

Kepler 78b orbits so quickly because it orbits very close to its parent star, which makes the surface of the planet unbearably hot. Ultimately, Kepler 78b is about 1.2 Earth's radius (so it's pretty similar in size to Earth), but it maintains a surface temperature of 4,800 degrees Celsius (8,600F). This means that, whatever the surface is made out of, it's liquefied by the heat--and the world turns into the most hellish lava-planet you've ever imagined. The planet is probably tidally locked with its parent star, meaning the same side is always facing the star. Think that tidal locking means that the side of the planet not facing the star will be nice and cool?

Well, while one side of the planet blasted with solar radiation, the "cold" side of the planet won't be very pleasant either. The super-hot, liquefied surface material from the sun-facing side will circulate to the cooler side. So it's still, not a good place to build a vacation home.

Kepler 78b was discovered using the transit method. As far as solar transits with planets are concerned, that's where the planet passes in front of the host star. This causes a dip in the star's light which is detectable by some of our telescopes. From that dip in the star's brightness, we can deduce a lot about the planet – primarily its size by how much the light dims and its orbital speed by how often it transits. In addition, if we are lucky, we can analyze the light that passes through the planet's atmosphere and get a general idea as to its atmospheric composition. We aren't quite sure about Kepler 78b's atmosphere, but if it has an atmosphere at all, it’ll be vaporized rock and metals.