The Most Incredible Image of Neptune You'll Ever See 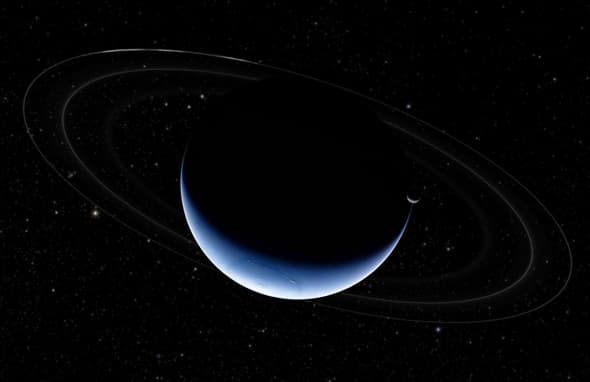 Before the Voyager 2 probe finally reached its destination in the outer-solar system—a journey of 2.7 billion miles (4.3 billion kilometers)—astronomers didn't anticipate just how many things the flybys would reveal about the outermost ice-giants.

Its quick visit with Neptune might have been the most illuminating. For starters, Voyager discovered more than 5 previously-unknown moons. We also learned that the planet has a Neptunian-equivalent of Jupiter's "Great Red Spot" (though on a much smaller scale), called the "Great Dark Spot." But perhaps the most surprising discovery was that of Neptune's ring system, which was first theorized to exist—but never confirmed—in the 1800's.

Prior to this reveal, astronomers only definitively knew of two planets with rings; Uranus and Saturn (of course). Now, we know that not only does Saturn have a system of rings, but all of the gas giants—including Uranus, Neptune and Jupiter—do as well. They are merely much too faint to be seen at visual wavelengths.

Yet whilst Voyager was perched 3,080 miles (4,950 km) above Neptune, astronomers were finally able to take the very first image of Neptune's elusive rings, which additionally confirmed research from the 80's.

Ultimately, it appears to have 5 separate rings—Galle, Le Verrier, Lassell, Arago and Adam's Ring (in order from the closest and most distant). All of them are faint and dusty, but some are quite large. Their particles appear to be comprised of dust, rock and some material that is incredibly dark and doesn't respond to light—perhaps that something is organic matter baked by interplanetary radiation.. we simply don't kn0w.

As such, this obviously isn't a completely real image, but it's not fake either. The details are actually what make it just as cool as—if not cooler than—any real image. The composite shows what one might see if they were witnessing the wonders of Neptune through Voyager's eyes:

The creator, Rolf Wahl Olsen, took various real features of Neptune and superimposed them on the image taken by Voyager of the ice-giant. The rings were generated using long-exposure data taken of different sections. Once they were spliced together, Olsen was able to accurately model the density profile of the thinnest rings. He then proceeded to add the rings to the rest of the image.

Lastly, Olsen took great care when adding in the background stars, even putting them in the precise position and angle they were in when Voyager 2 captured Neptune for the first time. Even Triton and the rings were included in their rightful position (and size).

All-in-all, painstakingly preciseness of the details make this a view you won't soon forget.  You can read all about the process of putting everything together here. (Or, you can find a larger image here)

Think this is neat? Check out our article about an asteroid found with its own set of rings, or see how Earth might look if it had one.