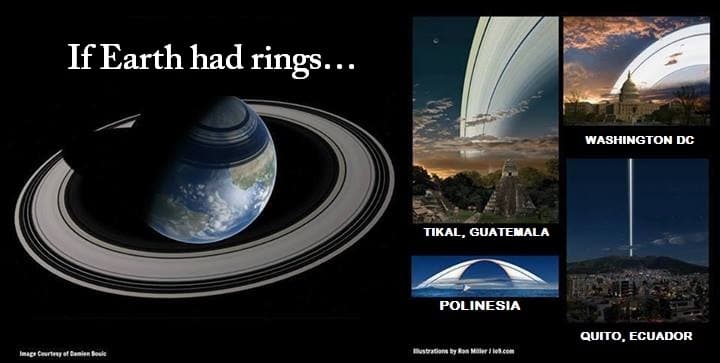 When the moon was formed after a collision between Earth and another a celestial body, it should have left a lot of debris around Earth. The debris within the Roche's limit *should* have formed rings around Earth.

In truth, it's quite likely that Earth *did* have a ring (or a system of rings) sometime in the VERY distant past; however, any such rings would have only been possible for a short period of time after the collision between Earth and Theia (the hypothetical planet that struck Earth to form our moon). Unlike the rings that belong to Saturn, Earth's rings would have dissipated pretty quickly.

The primary reason that the Earth cannot sustain a ring system is due to the Earth’s proximity to the Sun. Obviously, the Earth is located much closer to the Sun than Saturn. Since it is so close, the water-ice particles can transform from a solid to a gas, this process destroys most of the material that could form a ring system, and UV light radiating from the sun would strip any of the remaining material of its water molecules.

This brings us to an interesting question: how would life (and our planet in general) be impacted if we had a series of rings that managed to withstand the elements of space?

First and foremost, it would be a pretty sight to behold, as the rings would be visible during both the day and the night. Obviously, it would be particularly impressive at night, but it would be ever more impressive when we saw our planet's shadow encompass the rings (perhaps this would be similar to the image of Polynesia and the ocean, which is shown in the graphic below).

However, the light that was reflected  off the rings when the Sun was down would prove problematic for nocturnal species. A number of species have eyesight that is specifically geared towards navigating through the darkness. So a significant increase in luminosity could throw them out of whack (this would be due to the rings drowning out some of the light from background stars.) One species, known as the dung beetle, actually navigates using the stars as a road-map. Another species, the swallow-tailed gull (native to the Galapagos Islands), have their behavior modified by lunar cycles.

And the problems don’t stop there… if Earth had rings, the shadow of them could reap havoc on our weather patterns, which would include a change in the amount of sunlight that reaches the ground (something that is bad news for photosynthesis). During the winter time in the northern hemisphere, the shadow cast by the rings would cause the temperature to be a little bit cooler in the winter and potentially hotter during the summer.

How much the temperature would change depends on the thickness of the rings. The composition of the rings is a factor one must consider as well (Saturn's rings are so bright partly because of the heavy composition of water-ice, which reflect significantly more light than rock would).

Among other things, our satellites in geosynchronous orbit around Earth could be affected (assuming the rings are situated on Earth’s equator). Any pieces of space rock traveling at a certain speed could flat out obliterate any equipment, which would definitely be a problem for any manned missions beyond our own back door. In short, if Earth had rings, life would probably still exist, but not life as we know it.

Ron Miller, from io9 put together these "Artist impression" images of how Earth would look with Saturn's rings (equipped with some information about exactly what we are seeing in each shot). He did an incredible job, though I must point out that these rings are not a true representation of how Earth's rings would look if it had a ring after the collision that formed our moon. You can clearly see the Cassini division in these images, which is native only to Saturn.

This brings me to this video, which was done by Roy Prol. It's actually very well done, even mathematically accurate (with the size, position and position in respect to Earth's roche limit). For anyone interested, I definitely recommend you watch it.