When (or More Importantly, How) Will We Evolve? 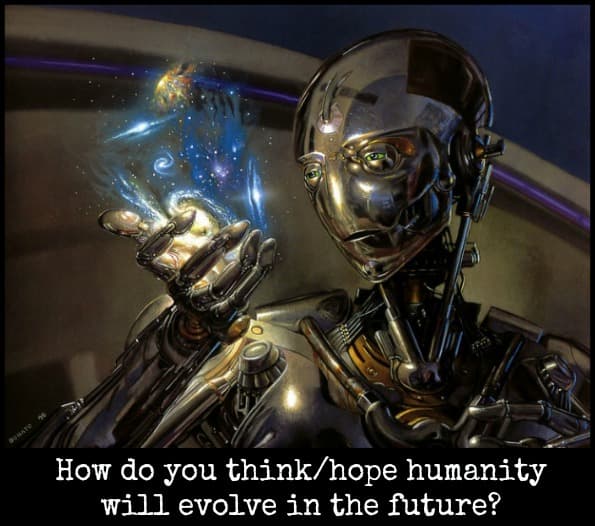 This raises a very interesting point of discussion. Assuming that humanity does not destroy itself (and we spread beyond our sweet Terra, before she is eaten up by the Sun), to a point where we do not fear extinction by terrestrial means, how will humanity change? To serve you, the reader, a disclaimer before I continue, the following is mere speculation, based in a reasonable scientific background. With that out of the way, I will continue. Starting with;

It's still hard for me to remember at times that a vast majority of the technological improvements of society occurred in the last 200 years. From telephone to smart phone, steam engine to nuclear fusion, conjecture-based medicine to modern day miracles of medical science, all of which, along with countless other advancements, are technical marvels that have changed life on Earth. This exponential rate of advancement is why some futurist expect humanity to experience a gradual synthesis with machine. It only makes sense. If machines and computers are capable of completing a task to benefit a human more than a human's own hardware (their body) is, why not build these new and improved systems directly into our bodies?

Technology could be used to make us smarter, stronger and even live longer. Ethical obligations aside, technological fusion is a suitable candidate for human evolution. However, a major argument is raised from this speculation: Do we lose our humanity if we become machine? Many different forms of media argue this point of contention. My personal favorites (which I recommend giving a look at) are the movies Blade Runner and 2001: A Space Odyssey. Both bring the idea of trans-humanism to the attention of the audience. Would synthesis with machine be a bastardization of natural evolution? (This is particularly interesting once you realize that the line between the living and unliving isn't well defined)

A strange as it may sound, the goal of life itself can be reduced to a single statement: Collect energy. Think about it, all life on earth, including humans, vies to find more efficient ways to sustain itself. In effect, an organism's one goal is to retain order through energy consumption, reversing what is known as entropy on themselves. As an aside, entropy is still increased as a whole, only the entropy of the life form is decreased. Entropy is responsible for all disorder, hence an organism's goal is to collect energy in order to reduce entropy on itself. This is essentially what remaining alive is. As such, it could be predicted that the end goal of all organisms is to eventually dominate all energy collection at any scale, whether it is stellar or galactic.

I struggle to imagine this, for it is impossible to picture what the ancestors of humanity would look like at this point. Instead, I choose to ponder the sheer battle the sons and daughters of humanity will face between order and chaos. Who will win, us or entropy? Trick question, entropy always wins. But I imagine whatever is the far flung child of what was once humanity will discover novel ways to counter entropy for as long as they can muster. I lack the ability to really describe what this battle could be like, but the below short story, 'The Last Question' from Isaac Asimov, is a perfect read to finish off my speculation.  You can read it here, or you can watch this great video:

To conclude, we can answer the question of 'when do we evolve?' Simply put, right now, it is happening with every genetic mutation and technological advancement we, as a collective body, experience. The real question to think about is, "What will we become?"