Tokamak Reactors: Harnessing the Power of the Sun 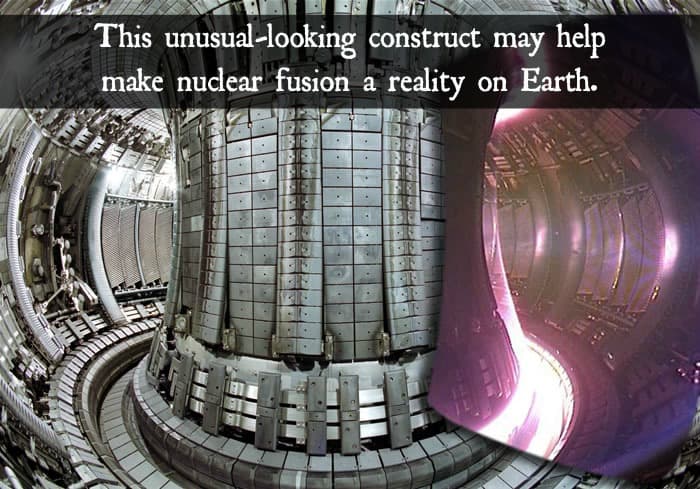 Over the last few decades, we've been reminded several different times that our conventional means of generating energy can lead to extreme consequences. As long as fallible humans are involved, the risk is always present. Thus many great minds are at work developing technologies that can (hopefully) prevent such mistakes from becoming catastrophic.

One such technology, called the Tokamak Reactor, is a magnetic containment device that is one of the most researched methods for controlled thermonuclear fusion power (yes, we are talking about a device that can harness energy using the same mechanism that powers the sun [on a much smaller scale]). The initial design was first theorized by Russian physicist Oleg Lavrentiev in the 1950s, but it wasn't until a few years later that two Russian physicists— Igor Tamm and Andrei Sakharov—invented what we now know as a Tokamak (though their device is still based on Oleg's initial idea).

Even though the technology has been around for quite some time and has proven to be effective, it doesn't come without constraints. Due to limited advances in technology, the biggest issue that has always held back the Tokamak reactor is the problem of heating the plasma. In order for the plasma to reach its operating temperature, it must be heated to 10 keV, which is equivalent to approximately 100 million degrees Celsius. Various different methods are used to heat the plasma, which range from using magnetic compression to bombarding the plasma with high-frequency microwaves.

The Tokamak creates energy by absorbing large amounts of high energy neutrons. These neutrons are created by the heated plasma spinning around the reactor. Because these neutrons are neutrally charged, they are no longer held in the plasma stream by the magnetic fields, and continue outwards until they are stopped by the inner walls of the reactor. The heat from these neutrons is then converted into energy; however, a lot is lost in the process due to cooling.

The neutrons yield so much energy, they could actually melt the walls of the reactor, which is obviously not good. So to prevent this from occurring and destroying the system, a cryogenic cooling system is needed. Such a system utilizes a mixture of liquid helium and liquid hydrogen. When combined with ceramic plates, they protect the superconducting magnets and reactor walls. There are currently around 30 known Tokamak reactors in operation around the globe; the majority of them scattered across Europe, Russia and China.

How They Could Improve The Future:

Currently the largest Tokamak reactor, ITER which is an acronym for International Thermonuclear Experimental Reactor, is being constructed in Cadarache, France. As the name suggests, it is an international joint program between the European Union, India, Japan, China, Russia, South Korea and the United States. The European Union is contributing 45% of the 16 billion Euro cost; with the other six participants contributing 9% each.

ITER is designed to produce 500MW of energy, which physicists believe is approximately ten times the amount of energy required to heat the plasma to the required temperature to sustain fusion; however, because this is the first reactor of its kind, there are no plans to use the excess energy to create electricity as of yet.

ITER’s proposed mission is to demonstrate the feasibility of a fusion reactor and to show that it can operate without negative impact to the environment or to surrounding ecosystems. The ITER project is expected to last 30 years, with 10 years being allotted for construction and 20 years for experimentation. Ground was broken on the construction site in 2008 and it is predicted they will start building the reactor itself in 2015; by 2020, they are hoping to achieve first plasma. And finally, by 2027, they hope to start deuterium-tritium reactions.

Aside from the obvious scientific advancements; another goal of ITER is to show that fusion reactors are a cleaner and safer alternative for deriving electricity than our traditional fission reactors. Plenty of examples are available of fission reactors melting down to various severities (Three Mile Island, Chernobyl, and Fukushima) the risk of a meltdown is non-existent with fusion reactors (though thanks to blatant fear mongering, the true extent of the damages inflicted by each event remain unknown).

The plasma requires a fairly specific temperature to sustain fusion within the reactor and if something causes it to go out of balance, the fusion process stops within seconds, immediately ceasing the reaction process. A meltdown is physically impossible. Replacing fission reactors with fusion reactors would be humanity's way of taking the first step from a Type 0 civilization to a Type 1 civilization on the Kardashev scale.