How are stars born? How do they die? 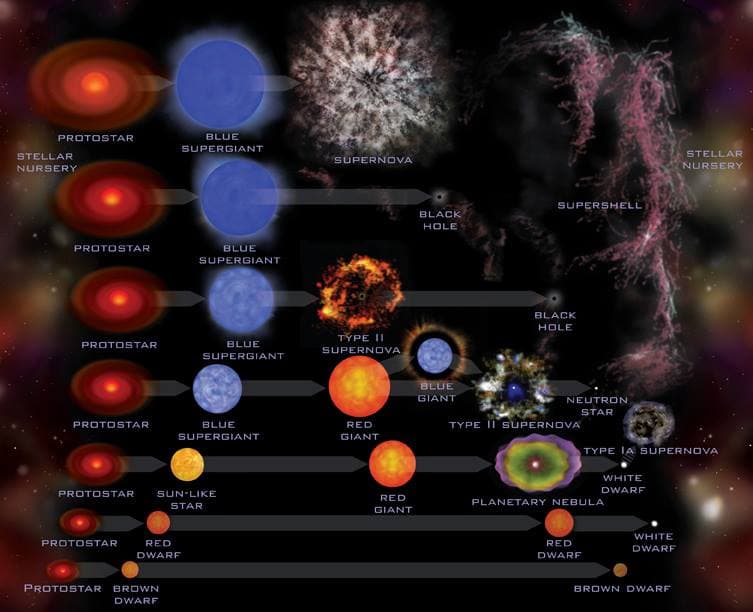 You’ve probably been told that staring directly at the Sun is bad for your eyes. However, we don’t have to have uncomfortable staring contests with the Stars to try and get them to give up their secrets! After years and years of research, scientists have managed to find out quite a bit about the oh-so-secretive stars without losing a staring contest.

Firstly, stars go through the same process that we do in the sense that they are born, live, and then die. The difference is that they do it far more dramatically, and take a much longer time doing it. Depending on the mass of the star, the lifetime can range from a few million years to trillions of years! So let's take a moment to get to know a little something about the lives of some of the oldest inhabitants of the universe: STARS.

Naturally, this is where the comparisons between humans and stars have to stop. The birthplace of a star is a huge, cold cloud of gas and dust, nebulae/nebulas.

These clouds begin to shrink, a result of their own gravity. As a cloud begins to shrink it gets smaller and the cloud breaks up into clumps. Eventually, these clumps reach high enough temperatures and get so dense that nuclear reactions begin. When the temperature reaches about 10 million degrees Celsius, the clump becomes a new star, a protostar. A protostar is not very stable. In order to live on, the protostar will need to achieve and maintain equilibrium, a balance between gravity pulling atoms towards the center of the protostar and gas pressure pushing heat and light away from the center. When a star can no longer maintain this balance, it dies.

Infrared observatories such as ESA’s Herschel space observatory (launched in May 2009, sadly no longer with us) are able to detect the heat that comes from such stars that we are not able to see, and therefore give us the information we need to research further.

At “Star Status,” stars spend the majority of their lives fusing hydrogen. So what happens when the hydrogen fuel is gone? Well, the stars fuse helium into carbon and after a while, into even heavier elements. Maintaining the balance between gravity and gas pressure becomes very hard. The stars eventually start to collapse on themselves. Before the star’s inevitable collapse, nuclear reactions outside of the core cause the dying star to expand outwards and this is what we call the “Red Giant” phase. It really is as dramatic as it sounds.

How dramatic the death is, depends on the mass of the star. Our Sun is expected to turn into a white dwarf star. If a star has a slightly larger mass than our Sun, it may undergo a supernova explosion and leave behind a neutron star. If even larger, at least three times the mass of the Sun, the star could even implode to form an infinite gravitational warp in space, a black hole!

Stars live the majority of their lives in a phase that we call the Main Sequence. Our Sun is currently in the main sequence. However, not all the stars in the Universe are in the main sequence. When we peer into the night sky, we see history. Perhaps you have spotted a few red stars in the night sky? There’s a chance that the stars you saw were already dead when you saw them. Why? Well, these stars are so many light years away that it takes a very long time before the visible light reaches our eyes. When we look up, we are looking at what a Star used to look like X light years ago (X depending on how far away the star is).

Some stars are only just beginning to form, others are in the Main Sequence and some have begun to die. Luckily for us, there is an amazing diagram, The Hertzsprung – Russell diagram that shows the relationships and differences between stars:

If you look at the HR-Diagram (attached to this post), you can see many dots. Each dot represents a star. The Universe has many stars in it; hence there are many dots on the diagram.

The horizontal axis represents the star’s surface temperature, in Kelvin. Here we have higher temperatures on the left and lower temperatures on the right. Usually we go from lower to higher; however, it’s more adequate to see that a star in the upper left corner of the diagram is both hot and bright. A star in the upper right corner of the diagram is both cold and bright, what kind of star would this be? Take a look at the diagram. Happy star hunting!