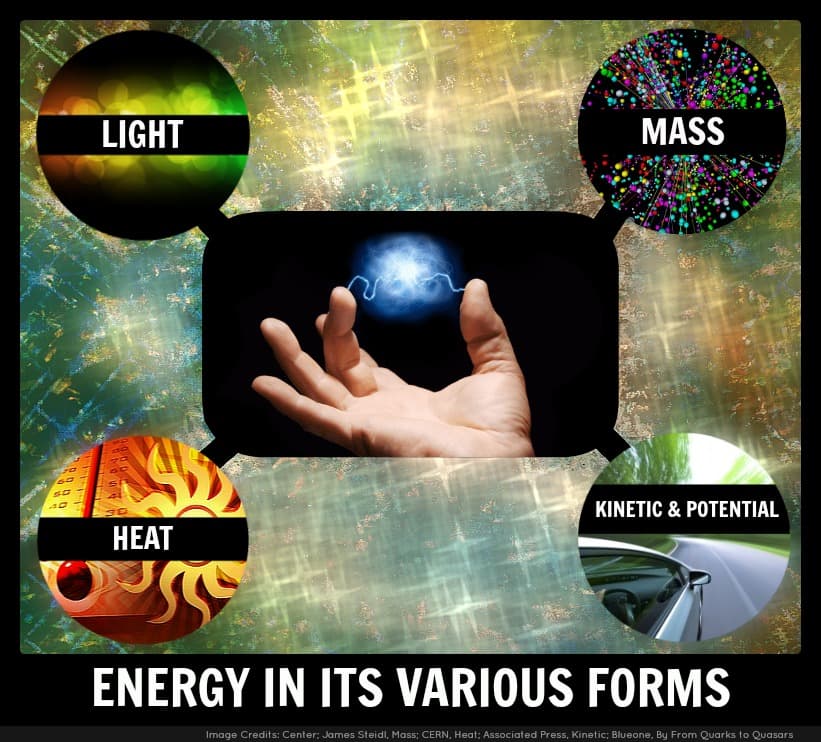 Thermodynamics technically is the study of heat, but it encompasses all forms of energy. So you know, thermodynamics is typically used to express entropy, and entropy can be used to express information. Yup. Information is energy. When I said energy is everything that exists I didn’t mean it lightly. Though there are many types of energy, your question still stands: what is energy? As per our current understanding of the universe, energy just is. It is the fundamental and abstract quantity that the entire universe and everything in it is made out of. So a more meaningful answer is that energy IS the universe (and the universe is energy).

How all of the different expressions of energy interact with each other is an intrinsically important concept in physics, because when you boil physics down to its most basic essence, it is simply the study of the nature and interactions taking place microscopically with the various forms of energy.

Since there isn’t really a tangible definition for energy as a whole, I’ll spend a little time on the more common ways of quantifying energy. Though I’d need to write an entire library of books to give sufficient information on every kind of energy, you should find the list suitable. Let's start with the most obvious form;

Light is probably the most interesting form of energy. It acts contrary to almost everything else. The easiest example of this is the fact that light, unlike anything else, is capable of going the speed of light (something that would prove disastrous to our understanding of physics if anything else could). Additionally the amount of energy in light has nothing to do with its speed. Light has a host of interesting qualities, like the quantum superposition between particle and wave, effects like red shift, the fact that the speed of light is intrinsically linked to energy (e = mc^2), and many more fascinating qualities.

Heat is most relevant when talking about atoms. Typically expressed as the level of excitement in the electrons, which can be seen by their orbits. Though that explanation seems painfully pedestrian compared to the reality of heat’s significance. In physics, heat isn’t talked about in that sense very often; instead it is thought of as entropy. Entropy can be explained several ways. A personal favorite of mine is by Leonard Susskind, who said (something similar to) “Entropy is the reason why it is a bad idea to park a sports car in a rain forest for 500 years.” Entropy can be thought of as loss of information, decaying of a system, equalization of energy, and the reason why perpetual motion machines are absolutely impossible (no free energy for you).

A common joke about the first three laws of thermodynamics is that they are:
You can’t win
You can’t tie
You can’t quit

In other words, if the economy worked like entropy did, the lowest amount you could spend to gain one dollar would be one dollar and one cent. Entropy is the universe's way of constantly causing you frustration, even if you don’t realize it.

But entropy isn’t actually all that bad. If it weren’t for entropy, the universe would more or less be exactly as it was when it was brand new. Sure entropy causes organized systems to degrade (as in the sports car example), but if an existing system does not degrade there isn’t much room for a new one to emerge.

The easiest way of expressing the energy in mass was done by Einstein in his immortal equation E = mc^2, but that might not bring it home to everyone. I’m going to conveniently ignore particle physics, because that would take a long time to even give an overview on, so instead I will catalog some of the more prominent ways that mass possesses the ability to affect other systems.

Probably the type of energy you are most familiar with. This is the reason why hammers can drive nails, steam can power trains, and bombs can blow up cities. Sated pretty nicely by Newton in his laws of motion, the gist of it is that stuff tends to remain the same until it runs into something else. So if something is standing still, it is inclined to stand still until something that is not standing still runs into it, and causes it to move. If something is moving it is inclined to continue moving in the same direction at the same speed until it runs into something else, in which case it can either change speed/direction, or stop entirely.

Though a lot more complicated in chemistry, I’ll summarize potential energy by saying it is kinetic energy that hasn’t happened yet.

One of the properties of mass is gravity. Everything with mass has gravity, and everything with gravity has mass. This is biggest way that mass affects other systems, as it spreads at the speed of light in all directions, affecting everything else with mass in that radius. An interesting thing about gravity is that the value gets perpetually lower as the distance gets greater, but it will never equal zero. Given enough time, the gravity of anything will affect everything else. Pretty impressive when you consider that kinetic energy usually only affects one thing at a time.

Though this list is far from complete, now, at least you have a basic understanding of energy's importance (and significance) in physics.