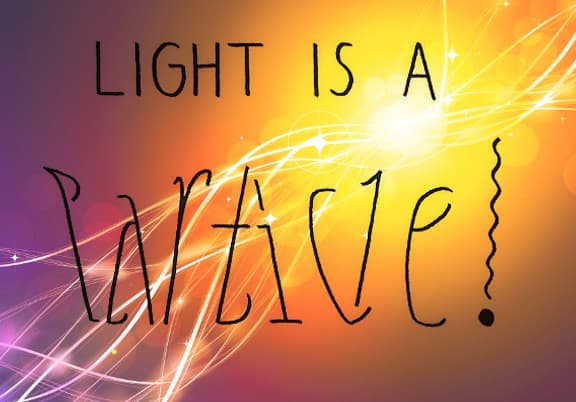 Classically, light can be thought of in two ways: either as a particle or a wave. But what is it really? Well, the 'observer effect' makes that question kind of difficult to answer. So before we get too far into it, what is the observer effect?

First, let me explain why this is confusing. If you aren’t familiar with particle physics - or wave dynamics, in particular - you might simply be wondering what the big deal is. Why can’t it be both? Well the fact of the matter is that particles act in a very specific, ordered manner. As do waves. Yet, for the most part, each constituent part acts completely different from the other. Therefore, if something were to be both wave and particle, it wouldn’t make any sense from a certain standpoint. I mean, If you had to go somewhere, but you had to go east AND west to get there (not eastwestern or westeastern), you’d probably be left scratching you head as to which direction you need to take.

As we mentioned earlier, we have conclusively proven that light is a particle by giving it tests that only a particle will react to. We have also proven that light is a wave to giving it tests that only a wave will react to. Unfortunately, it have been proven that there is no test that can simultaneously test for both wave nature and particle nature, so in a way, light is whatever you want it to be. This goes back to the observer effect. By testing light, we make it whatever we want it to be. Either particle, or wave, which begs an interesting question: what is light before we test it? This is where stuff gets interesting.

There are many interpretations of wave-particle duality, but the most commonly accepted interpretation is the Copenhagen Interpretation. Erwin Schrödinger has credit for the thought experiment that makes this easiest to explain. To simplify the environment of Schrödinger’s cat, lets say that you are observing a box. You know exactly one thing about this box - that there is a cat inside. Now the cat can exist in two states: either alive or dead. Like a wave and particle, being alive and dead are largely contradictory so the analogy works well. According to the Copenhagen Interpretation of quantum mechanics, until you observe the cat, it is both alive and dead simultaneously.

This is referred to as a state of quantum superposition. Even things that are direct opposites can both be true simultaneously. That is, until the object in question is observed. When this occurs, it results in decoherence, which forces an object to “snap” into one state of being.

This happens, in part, due to the uncertainty principle of quantum mechanics (Sometimes confused with the Observer Effect, this is a different, but related concept). This is pretty simple to explain. The core of the principle is that the more you know about one thing, the less you are capable of knowing about another. This is also why it is impossible to know both the location and momentum of an electron, but that is a topic for another time.

The annoying thing about light is that we can conclusively prove it is a particle, or we can conclusively prove it is a wave. If we test light to see if it is a wave, we prove with 100% certainty that it is a wave, and due to the uncertainty principle, we can know 0% about the particle aspect of light. To test one aspect is to make it impossible to demonstrate the other. So to answer to question “Is light particles or waves”, you have to observe light. But to observe light it to change it. So from a philosophical point of view, the question has no meaning. Who knew science could be so Zen?

I’d like to sum this up with a quote from Lewis Carroll, who in his book “Alice’s Adventures in Wonderland” wrote:

"Ever since her last science class, Alice had been deeply puzzled by something, and she hoped one of her new acquaintances [the mad hatter and march hare] might straighten out the confusion. Putting down her cup of tea, she asked in a timid voice, 'Is light made of waves, or is it made of particles:' 'Yes, exactly so,' replied the Mad Hatter. Somewhat irritated, Alice asked in a more forceful voice, 'what kind of answer is that: I will repeat my question: Is light particles or is it waves?'