Metals (or, How We Know What We Know about the Big Bang) 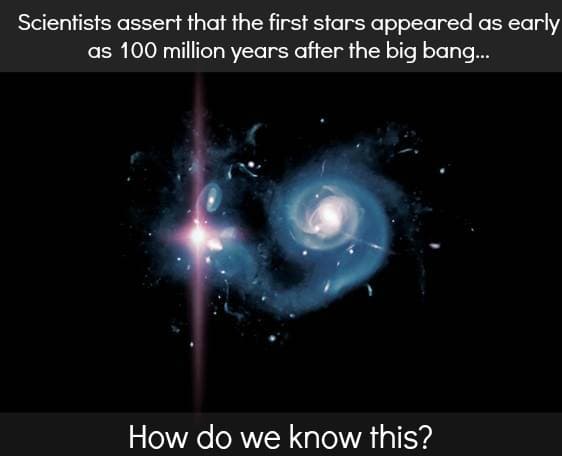 We've been able to determine when the very first stars are theorized to have come into existence, and we know that these stars were among the brightest and hottest that ever existed. But how can we possibly know this? The stars have never been detected, and we certainly can't see them. So how do we know what we know?

The simple answer is, "metal". After the Big Bang, almost 14 billion years ago, the only elements present were hydrogen and helium (the two lightest elements), although there were trace amounts of deuterium and lithium that came into existence when the universe initially cooled. However, when we look back into the infancy of the universe, even at the limits of our current visual power, we're still finding a lot of metals in the spectrum. This essentially means that there must have been an early epoch of stars, which produced the detected amount of metals.

In summary then, the reason that Population III stars (the universe's first generation of stars, which were metal-free) are thought to have existed is because metals are found in even the oldest of stars (and the most distant of quasars) that we can detect. One of the most distant objects to have been recorded is at Z=10 (about 500 million years after the Big Bang). The object is thought to be a proto-galaxy containing a plethora of massive population II stars (the universe's second generation of stars, which were metal-poor). This fits in with the time scale of HE 1523-0901 (*the* oldest star ever detected containing metals, with a metallicity of Fe/H=-2.95) which indicates that the first real epoch of star formation must have happened shortly after the first stars came into existence.

Unlike the population I stars (metal-rich stars), which we're able to observe forming (as they're still forming today), population II stars formed about the same way that the first population did. Although they had a lower metallicity, the conditions are still more or less the same (the most metal poor of which has a metallicity of just Fe/H=-5.6)

The first stars had an entirely different environment in which they formed. The ancient pristine gas clouds of hydrogen and helium were lacking in the dust particles and metals that current molecular clouds are known to contain. It might then be good to look and see what these metals have to do with the formation of the first stars. And most importantly, what the effects of not having any metals in the pristine molecular clouds had on the formation of the first stars.

Firstly, what effect do metals and dust particles have on a molecular cloud?

The most important job of metals in molecular cloud is helping to cool the surrounding material. Three of the most important metals for process of cooling are carbon, nitrogen, and oxygen. NH3 or ammonia is also quite effective. The reason for this is that they allow for the formation of molecules (such as water and carbon monoxide).

Next, we have dust particles. They help prevent the cloud from becoming ionized, which can happen if UV radiation streams in from any stars that are located in the general vicinity of a molecular cloud. In this case, the dust particles absorb and scatter the photons in the UV portion of the electromagnetic spectrum, but they still allow the IR photons to pass through pretty much unaffected. This is because, at this point in the evolution of the universe, the dust particles inside of a molecular cloud were able to cool down to temperatures around 10K.

Putting this all into action, what was the universe like when the first stars were born some 200 million years after the Big Bang? From the WMAP data, collected by the ESA, we know that the temperature of the universe approximately 380,000 years after the Big Bang was about 3000K (still too hot for star formation to begin. In fact, it was still too hot for anything much to happen.).

So, what we need to look at next is the temperatures of the molecular clouds 200 million years following the big bang. As there was no dust or any metals in the universe at the time, molecular hydrogen, formed through interactions between hydrogen atoms and hydrogen anion atoms, did the bulk of the cooling. The molecular hydrogen did not form until the recombination era (which took place 380,000 years after the Big Bang), when there was a lot of free electrons flying around the universe. Said electrons eventually actually as a catalyst for the formulation of molecular hydrogen. However, without free electrons running about, this process comes to a halt.

The problem is that there are still uncertainties about the effectiveness of molecular hydrogen as a cooling agent based on its magnitude and energy dependence. It's believed to be less effective than the materials listed above, but molecular clouds are at a loss for something better without metals -- making it difficult to determine if there was sufficient time for cooling to occur in protogalactic halos (similar to protostar and protoplanetary cocoons, which eventually give birth to stars, but for galaxies), before they heated up through interaction with similar halos. This could effective staunch the formation of the first stars, as the clouds would collide before they have a chance to cool down enough to allow the star formation process to begin. By looking at the current universe around us, something obviously went wrong.

Doing some calculations (of which I am not going to bore you all with), using a temperature of 200K, I get a rough estimate of 1,160 solar masses (the combined mass of stars born within a molecular cloud with such a temperature). This falls roughly in the range of the numbers from in Scientific American paper (listed below).

From this, we can see that Molecular Hydrogen cooling can form stars with an approximate jeans mass (the mass needed for gravitational stability) of about 1160 solar masses. Some simulations, performed by Bromm & Larson, confirm masses from a few hundred to over 1000 solar masses in all. As the actual environment is yet to be visually observed, the exact derived masses of these stars remain speculative. The current simulations do suggest that we're on the right track -- that the first stars should be intrinsically very large, whether it is to the extent of >1000 solar masses is still widely debatable.