Could Quantum Entanglement Explain How the Arrow of Time Flows? 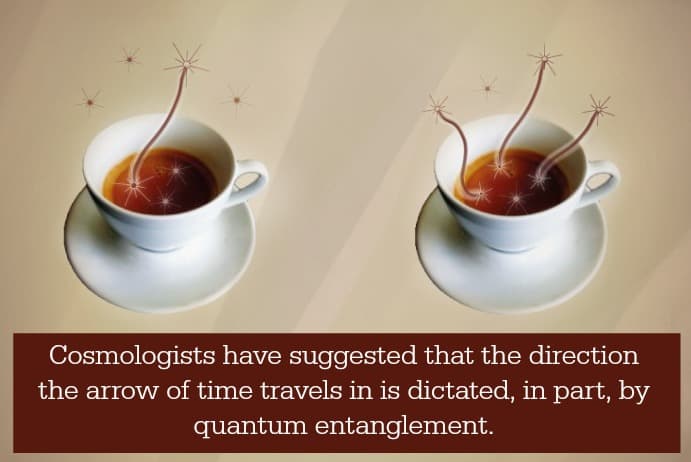 We come into existence when a sperm cell fertilizes an egg. We grow in our mother's womb. We open our eyes for the first time. We see color, hear music, make memories, learn the meaning of love and loss, and eventually, we die (hopefully after a long, long life). This much is as true as the Sun rising in the east and setting in the west, just as the mountains slowly shift and crumble and the seasons come and go. Imagine this: in a universe that follows the laws of physics in regard to time, your body (or at least the cells that make up "your body") would decompose in the soil before you emerged from your mother's womb.

I know, I know. Some of you might be wondering "how does that make sense?" Well, here's a doozy for you. We don't know why it DOESN'T happen that way in principle. You see: Time itself is a complete mystery (for the most part). We know that it exists with some certainty (though not all agree). We also know that many aspects seemingly contradict the very laws of physics themselves.

Our problems can be tracked all the way back to the inception of everything—when a tiny, but infinitely dense, point in a sea of nothing rebounded before "exploding," creating the entirety of spacetime, and seeding it with the building blocks that comprise everything we see today. In case it wasn't clear, "spacetime" is more than a word, it's a perspective, which alludes to the fact that space and time aren't two separate entities, but one interconnected thing. They come together to comprise the four known dimensions (3 belong to space and the fourth is time).

The second law of thermodynamics deals with something called entropy. "Entropy," in the simplest possible terms, measures the amount of order and disorder in a physical system. On one hand, the universe itself can be considered a closed system. Living beings, on the other hand, are open systems—meaning their levels of entropy are subject to change. The best way to envision this is to picture an egg, which represents one system. When whole,  the egg is a highly-ordered system,  but when you crack the egg open and scramble its innards, the egg evolves from a system of low entropy to a system of higher entropy—its information is lost.

Relating this back to the birth of the universe: Near the big bang, the universe-equivalent was originally a dense, almost perfectly homogeneous gas cloud (at almost maximum entropy). As time pressed on, the gas went from uniform to clumpy, having been driven together by gravity, causing the material to meet, coalesce and collapse to form stars and (much later) galaxies. This leads to a decreased level of entropy.

Based on pretty much everything we know about entropy and its role in shaping the universe, the original level of entropy after the big bang was off. We aren't entirely sure why, but there are are several ideas.

New insight into an old quantum theory could mean the perceived arrow of time is the result of quantum entanglement.

Most know of this quantum phenomenon as "spooky action at a distance." Einstein called it this because its effects are far-reaching and inexplicable. It seems that, no matter the distance between two of these entangled particles, both seem to know exactly what the other is up to, which is a clear violation of relativity—one of Einstein's greatest works. It tells us that nothing—not even signals or information—should be able to travel at the speed-of-light but light itself, let alone exceed it, yet that's exactly what they seem to be able to do.

Going back to its potential link to the arrow of time, quantum physicist Tony Short explains that if we take, say, a hot cup of coffee, it can equilibrate ("equilibrate," in this context, refers to a cup of hot liquid reaching maximum energy distribution within a viable span of time) in a room because quantum entanglement allows the state of the coffee cup to match the state of the room, with both becoming connected by an invisible tether on a microscopic level (illustrated below). This very same principle is the reason energy disperses, instead of collecting.

The idea first appeared many years ago, but it didn't come to prominence until 2009. Since then, several different teams have published papers (linked below) building on the same principle. In one of the latest revelations, two separate groups of researchers have conducted experiments that seem to show that the span of time it takes for objects to equilibrate is directly proportional to size.

Per Nocolas Brunner—a University of Geneva researcher involved in one of the studies—the mechanism that allows a cup of coffee (or conversely, a frozen cup of water) to reach equilibrium is “very intuitive....but when it comes to explaining why it happens, this is the first time it has been derived on firm grounds by considering a microscopic theory.”

What they posit essentially changes entanglement from a phenomenon that deals solely with the quantum world, to one that is all encompassing. It could also indicate that the universe itself is one big ball of uncertainty. Two important things to note are the particle/wave duality, and the uncertainty principle. The first deals with the dual nature of photons, which have properties of particles and waves, and the latter says that we can't know the momentum and position of a particle at the same time—only one or the other can be known with any precision.

Above all else, there's something that is fundamental to our understanding quantum mechanics. Called Bell's Theorem, it tells us that rather than having distinct, describable properties, particles themselves are nothing more than the probabilities ascribed to them.

The underlying conclusions are astounding; They have demonstrated that when particles interact with their environment, they leave key information about them—like their quantum state—behind...kind of like blood splatter or DNA at a crime scene.

"This local information loss causes the state of the coffee to stagnate even as the pure state of the entire room continues to evolve. Except for rare, random fluctuations," Short said, “Its state stops changing in time.”

In plain English, it would explain why coffee cools down, instead of spontaneously heating up. It does, however, leave room for that uncertainty we were talking about before. In theory, it's possible that, as the pure state of the room evolves within a finite span of time, the particles in the coffee and in the room could "demingle," which would result in the liquid taking on a pure state of its own.

The likelihood of this ever happening is so minutely small that one would need to outlive the universe by trillions of years in order to see it (even then, odds are, it may never happen anyway). This gives off the faux illusion that the arrow of time is resolute, when that might not be the case (it is perhaps pertinent to point out that other research indicates that quantum entanglement can reach into the past).

“Essentially entanglement opens a very large space for you,” Popescu said. “It’s like you are at the park and you start next to the gate, far from equilibrium. Then you enter and you have this enormous place and you get lost in it. And you never come back to the gate.”

"Entanglement," as Lloyd puts it, “is in some sense the essence of quantum mechanics." It might even be life-force of the universe; if Lloyd is correct and it indeed plays a key role in moving things along (like time and entropy). Some have postulated that entanglement might even have some role to play in holding strands of DNA together. Others have suggested that its effects could give rise to the very fabric of spacetime.

One thing is indisputable though, this concept has evolved from being pure bunk to one that seems more viable all the time, mostly thanks to developments in quantum information theory (yes, the one that gave us quantum computing, quantum networking and quantum cryptology). It essentially treats information as building blocks and it shows us that given enough time, entangled particles stop exhibiting information about their state on an individual basis, but it's not exactly lost in the traditional sense. "It was as though the particles gradually lost their individual autonomy and became pawns of the collective state."

Eventually, once the particles and the room reach a state of equilibrium and are thoroughly correlated, their states stop changing in a meaningful way. This apparent loss of information—along with the increasing number of quantum correlations—in short, drive the arrow of time (at least in this scenario). However, it doesn't solve every problem. “There is nothing in these works to say why you started at the gate,” Popescu said using the park analogy from earlier. “In other words, they don’t explain why the initial state of the universe was far from equilibrium.”

Still, from a philosophical point of view:

"Our ability to remember the past but not the future, another historically confounding manifestation of time’s arrow, can also be understood as a buildup of correlations between interacting particles. When you read a message on a piece of paper, your brain becomes correlated with it through the photons that reach your eyes. Only from that moment on will you be capable of remembering what the message says."

Lloyd put it in another way: “The present can be defined by the process of becoming correlated with our surroundings.” “We can discuss the fact that an hour ago, our brains were in a state that was correlated with fewer things,” he continued, “But our perception that time is flowing—that is a different matter altogether. Most probably, we will need a further revolution in physics that will tell us about that.”

Enjoyed this article? You might also like the following: "Time: Examining the Wibbly, Wobbly, Timey Wimey Stuff," Physical Consequences of Light-speed Travel," "The Physics of Stopping Time: What Would a World Without Time be Like?", and "If Time Were 2D," "Time Travel Paradoxes: Is Time Travel Possible?"