US Military Announces Plans for Satellite Orbiting the Moon

"Now we need to accelerate our plan because things are happening much faster than we expected." 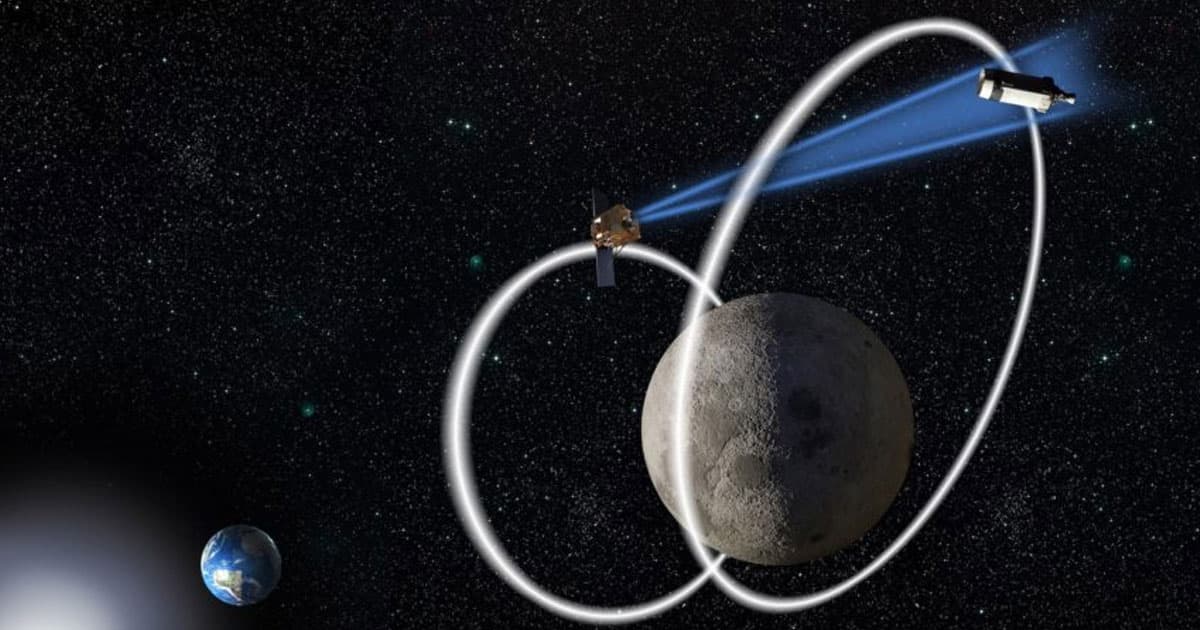 The US military is looking to have spy satellites patrol the the Moon's orbit, according to a recently shared video first spotted by Ars Technica.

"Until now, the United States space mission extended 22,000 miles above Earth," a narrator explains in the brief video. "That was then, this is now."

"The Air Force Research Laboratory is extending that range by ten times and the operations area of the United States by 1,000 times, taking our reach to the far side of the Moon into cislunar space," the narrator goes on to say.

Details on the planned project are sparse. The CHPS is a "spaceflight experiment designed to demonstrate foundational space domain awareness capabilities in the cislunar regime," according to an extremely brief description on AFRL's website.

It's a surprisingly ambitious new project that raises plenty of ethical questions surrounding the legality of establishing a military presence around our closest orbital neighbor — especially now that there has been a renewed push to return spacecraft and even astronauts to the lunar surface.

The project will be a collaboration between a number of US military branches. The Air Force will work with other organizations and contractors to develop the CHPS satellite, while the US Space Command will figure out how to best make use of it, Ars notes.

"It's the first step for them to be able to know what’s going on in cislunar space and then identify any potential threats to US activities," Brian Weeden, director of program planning for the Secure World Foundation, told Ars.

The AFRL is also looking to demonstrate small satellites for other cislunar missions.

The US military was seemingly caught off guard by a sudden rush to get to the Moon.

"We envisioned that there could be adversary activity out there that could pose a threat to our space systems many years ago, but we thought: 'Oh, that’s a long way out,'" Eric Felt, director of the AFRL's Space Vehicles Directorate, told defense publication C4ISRNET last month. "But there’s been so much activity."

"That pace of activity then causes us to say: ‘Well, we had a plan to get after cislunar space domain awareness, but now we need to accelerate our plan because things are happening much faster than we expected,'" he added.

It's still unclear when or if such a cislunar satellite will ever launch. For now, the AFRL is looking for suitable contracting partners to help it develop such technologies.

According to Felt, the lab is looking to award a contract this summer and launch some time in 2025.

READ MORE: The US Space Force plans to start patrolling the area around the Moon [Ars Technica]

More on the Space Force: Space Force Members Annoyed That Nobody Takes Them Seriously

Read This Next
The Moonian
Senior NASA Official Fears Getting "Stuck" on the Moon
Mo Budget Mo Problems
NASA Is Asking For an Enormous Amount of Extra Money
From Our Partners
Put The Solar System In Your Living Room With These Celestial Lamps
Moon Madness
SpaceX Will Launch Remote Controlled Racecars to Lunar Surface
Breaking Water
NASA's Big Moon Surprise Is That Lunar Soil Contains Water
More on Sci-Fi Visions
Human v. Giraffe
Tuesday on the byte
Chaotic Italian Fashion Line Baffles Facial Recognition Software
Step One
Tuesday on the byte
World’s Third Richest Person Says He’s Developed "Addiction" to ChatGPT
FROM THE DEPT. OF...
Tuesday on futurism
The Best Places to Buy A Laptop in 2023
READ MORE STORIES ABOUT / Sci-Fi Visions
Keep up.
Subscribe to our daily newsletter to keep in touch with the subjects shaping our future.
+Social+Newsletter
TopicsAbout UsContact Us
Copyright ©, Camden Media Inc All Rights Reserved. See our User Agreement, Privacy Policy and Data Use Policy. The material on this site may not be reproduced, distributed, transmitted, cached or otherwise used, except with prior written permission of Futurism. Articles may contain affiliate links which enable us to share in the revenue of any purchases made.
Fonts by Typekit and Monotype.