"Nobody would suggest buying airplanes that only fly once and then crash into the ocean." 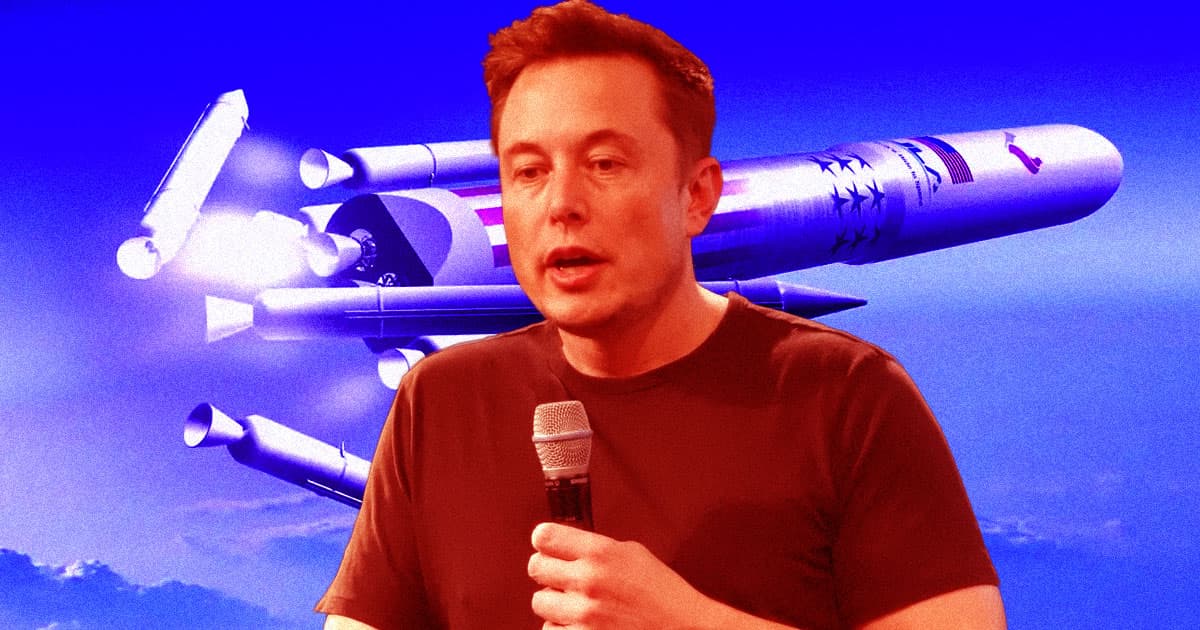 Despite SpaceX just having won a massive US Air Force launch contract, the company's CEO Elon Musk is super pissed.

That's because SpaceX was only assigned 40 percent of the military's national security missions between 2022 and 2026. The other 60 percent went to competitor United Launch Alliance (ULA).

That's not good enough for Musk. "Efficiently reusable rockets are all that matter for making life multiplanetary and 'space power,'" Musk wrote in a searing Thursday tweet. "Because their rockets are not reusable, it will become obvious over time that ULA is a complete waste of taxpayer money."

"Nobody would suggest buying airplanes that only fly once & then crash into the ocean," Musk continued in a separate tweet. "That would be absurd..."

“ULA is honored to be selected as one of two launch providers in this procurement,” Bruno said in a statement celebrating the contract award.

SpaceX and ULA beat out Blue Origin and Northrop Grumman to launch Space Force missions beginning in 2022. It's a big deal, as the Pentagon expects to send about $1 billion a year on launches, according to CNBC.

This isn't the first time SpaceX had beef with the Air Force. In 2019, SpaceX sued the Air Force for "wrongly awarding" billions to Blue Origin, Northrop Grumman and ULA.

The contract (in part) awards $316 million to SpaceX for one and $337 million to ULA for two launches. The total amount of the contract is likely far more, as CNN predicted, as a total number of launches or total contract value have yet to be revealed.

SpaceX has slowly been eating into the share of ULA's launch contracts over the last couple of years. That's arguably in large part due to the fact that SpaceX has been increasingly successful in lowering launch costs by reusing its rockets. The most recent milestone saw SpaceX reusing the same Falcon rocket booster as many as five times, landing it on a floating ship each time.

ULA's approach is quite different. The alliance, made up of Boeing and Lockheed Martin, is working on a massive Vulcan rocket system that's meant to replace the now aging Atlas and Delta rockets — all of which are single-use.

The alliance claims it'll attempt to catch rocket engines in the air with parachutes and helicopters, but no details have emerged about any plans to test such a system in the future, as CNBC reports.

The SpaceX competitor believes its next-gen rocket system will do the job just fine. “Vulcan Centaur provides higher performance and greater affordability while continuing to deliver our unmatched reliability and orbital precision that will continue to provide reliable, on-time access to space well into the future," Bruno said in his company's press release.

Read This Next
Butcher Shop
Neuralink Employees Admit Company Has Killed 1,500 Animals So Far
PDA
Elon Musk Is Faving Posts on Twitter That Are Making Our Skin Crawl With Embarrassment
Moon Patrol
US Military Announces Plans for Satellite Orbiting the Moon
From Our Partners
Build A Robotic Toy Car With This DIY Self-Driving Vehicle Kit
From Our Partners
This NASA Apollo 15 Commemorative Watch Is Historic In Its Own Right
More on Sci-Fi Visions
From the Dept. of...
Monday on futurism
The Best Humidifiers of 2023
Human v. Giraffe
Jan 24 on the byte
Chaotic Italian Fashion Line Baffles Facial Recognition Software
Step One
Jan 24 on the byte
World’s Third Richest Person Says He’s Developed "Addiction" to ChatGPT
READ MORE STORIES ABOUT / Sci-Fi Visions
Keep up.
Subscribe to our daily newsletter to keep in touch with the subjects shaping our future.
+Social+Newsletter
TopicsAbout UsContact Us
Copyright ©, Camden Media Inc All Rights Reserved. See our User Agreement, Privacy Policy and Data Use Policy. The material on this site may not be reproduced, distributed, transmitted, cached or otherwise used, except with prior written permission of Futurism. Articles may contain affiliate links which enable us to share in the revenue of any purchases made.
Fonts by Typekit and Monotype.