"The unknown aircraft appeared to be small in size, approximately the size of a suitcase, and silver in color." 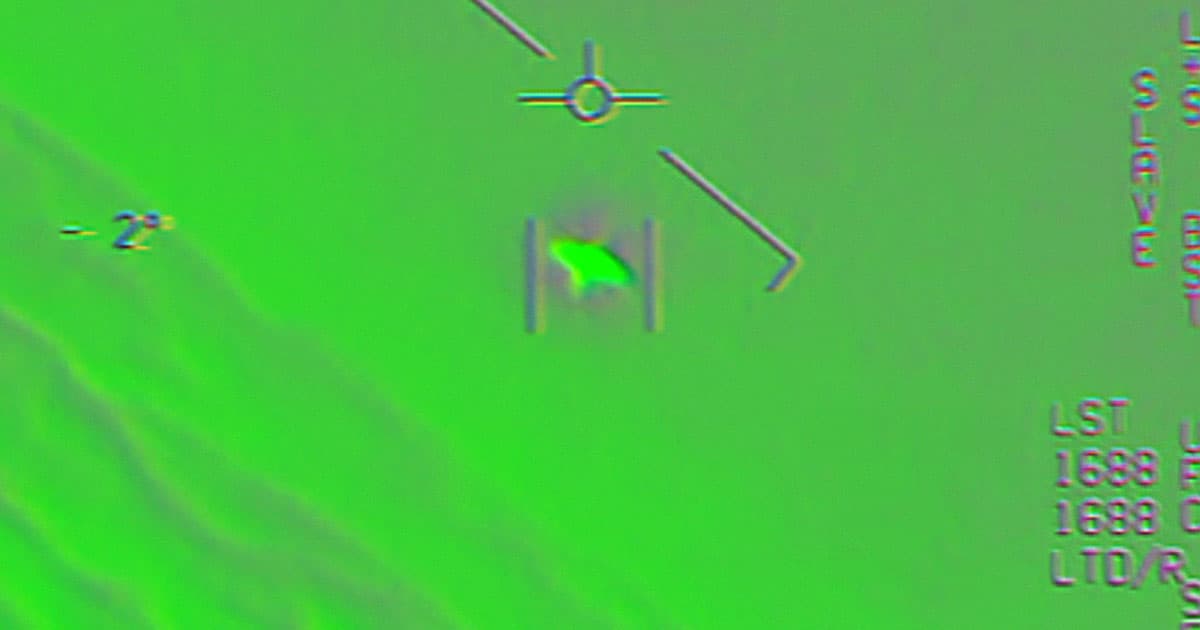 Image by US Navy/Victor Tangermann

The Pentagon has released new information about a series of fascinating encounters between US Navy pilots and unidentified flying objects.

The "hazard reports" include details about the size and shape of the "unidentified aerial phenomena."

"The unknown aircraft appeared to be small in size, approximately the size of a suitcase, and silver in color," reads a report describing a 2014 incident. At the time, the Navy aircraft "passed within 1000 [feet] of the object, but was unable to positively determine the identity of the aircraft."

A different report, in 2013, describes another object that "had an approximately 5 foot wingspan and was colored white with no other distinguishable features. Due to the small size, the aircraft was determined to be a [unidentified aerial system]."

The report noted that the objects could be drones, although no nearby operators could be identified.

The news comes after a series of UFO videos surfaced thanks to a 2017 investigation by The New York Times. The three videos showed strangely shaped objects zipping across the surface of the ocean, while others appeared to shoot up into the sky without any apparent methods of propulsion.

Last month, the pentagon finally formally released the three unclassified videos, noting that "after a thorough review, the department has determined that the authorized release of these unclassified videos does not reveal any sensitive capabilities or systems."

"[The Department of Defense] is releasing the videos in order to clear up any misconceptions by the public on whether or not the footage that has been circulating was real, or whether or not there is more to the videos," Sue Gough, a Defense Department spokeswoman, told CBS News last month. "The aerial phenomena observed in the videos remain characterized as ‘unidentified.'"

Just over a year ago, the US Navy also announced it started working on new guidelines for its personnel to report sightings and other encounters with “unidentified aircraft,” as Politico reported at the time.

Read This Next
Consider the Source
Pentagon UFO Report Describes Radiation Burns, Other Bizarre Claims
Oh God
Trump Implies That the US Military Could Defeat Aliens If They Show Up
Look at That Thing
Navy Pilot Describes Bizzare "Tic Tac" UFO Encounter He Filmed
Futurism
The Pentagon Ran a Secret Program to Find UFOs. Should We Expect Aliens?
More on Sci-Fi Visions
What is Happening
Feb 1 on the byte
Elon Musk Sets His Twitter Account to Private
From the Dept. of...
Jan 30 on futurism
The Best Humidifiers of 2023
Human v. Giraffe
Jan 24 on the byte
Chaotic Italian Fashion Line Baffles Facial Recognition Software
READ MORE STORIES ABOUT / Sci-Fi Visions
Keep up.
Subscribe to our daily newsletter to keep in touch with the subjects shaping our future.
+Social+Newsletter
TopicsAbout UsContact Us
Copyright ©, Camden Media Inc All Rights Reserved. See our User Agreement, Privacy Policy and Data Use Policy. The material on this site may not be reproduced, distributed, transmitted, cached or otherwise used, except with prior written permission of Futurism. Articles may contain affiliate links which enable us to share in the revenue of any purchases made.
Fonts by Typekit and Monotype.