"It was just behaving in ways that aren’t physically normal." 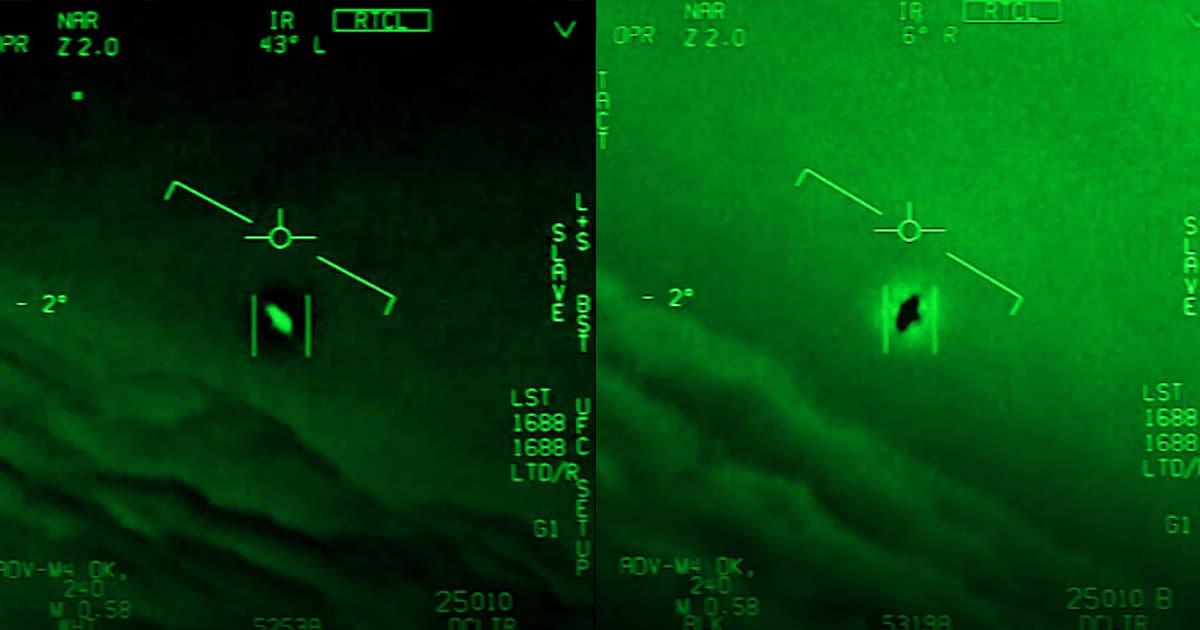 Image by US Department of Defense

In 2004, Navy pilots spotted something extremely unusual off the West Coast — groups of objects flying in erratic, inexplicable flight patterns.

Years later, the puzzling UFO encounter was revealed by The New York Times, with multiple eyewitnesses stepping forward over the years to describe what they saw.

One of three infrared videos, recorded in 2004 and shared by the Times in 2017, shows an odd oblong unidentified object, garnering it the nickname "Tic Tac."

Now Chad Underwood, the Navy pilot who recorded the video at the time, talked to New York Magazine's Intelligencer about what he saw in a new interview.

"You’re not going to see it with your own eyes until probably 10 miles, and then you’re not going to be able to visually track it until you’re probably inside of five miles, which is where [commanding officer, who first made visual confirmation of the UFO,] Dave Fravor said that he saw it," Underwood told Intelligencer.

"The thing that stood out to me the most was how erratic it was behaving," he added. "It was just behaving in ways that aren’t physically normal. That’s what caught my eye. Because, aircraft, whether they’re manned or unmanned, still have to obey the laws of physics."

What puzzled Underwood the most was that the "Tic Tac" bore no resemblance to any conventional aircraft.

More on the videos: Navy Confirms That Three UFO Encounter Videos Are Real

Read This Next
Okay Then
Millionaire Refurbishing Cold War Radar Unit to Hunt UFOs
Consider the Source
Pentagon UFO Report Describes Radiation Burns, Other Bizarre Claims
Out There
Former Pentagon Officials Say Family of UFO Investigator Reported Creature Peering into Their House
Futurism
Former Official: UFO Report Actually Strengthens "Alien Hypothesis"
Close Encounters of the Bored Kind
The Long-Awaited UFO Report Was Honestly Kind of Disappointing
More on Future Society
Beach Watch
Yesterday on the byte
Mysterious Object Emerges From Beach in Florida
D*** Pic Freedom
Yesterday on futurism
Elon Musk Thinks It’s Likely that “Something Bad” Will Happen to Him
Unorthodox Urinal
Dec 2 on the byte
Scientists Say They've Figured Out the Ideal Urinal for Not Splashing Back
READ MORE STORIES ABOUT / Future Society
Keep up.
Subscribe to our daily newsletter to keep in touch with the subjects shaping our future.
+Social+Newsletter
TopicsAbout UsContact Us
Copyright ©, Camden Media Inc All Rights Reserved. See our User Agreement, Privacy Policy and Data Use Policy. The material on this site may not be reproduced, distributed, transmitted, cached or otherwise used, except with prior written permission of Futurism. Articles may contain affiliate links which enable us to share in the revenue of any purchases made.
Fonts by Typekit and Monotype.