Trump is going to have "a good, strong look" to see if there are UFOs. 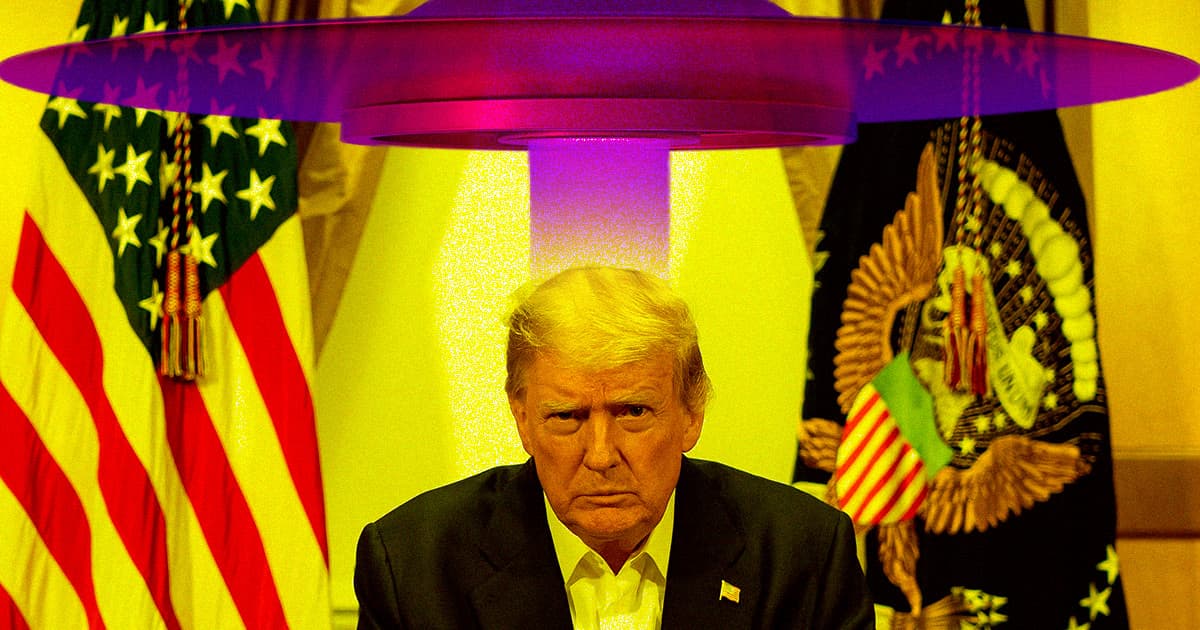 President Donald Trump is not entirely sure why the Pentagon has an ultra-secretive UFO program.

In a Fox News interview over the phone on Sunday, Trump was asked why the Department of Defense has set up a UFO task force.

"So Mr. President, are there UFOs?" anchor Maria Bartiromo asked him outright.

"Well, I'm going to have to check on that," Trump said. "I mean, I've heard that. I heard that two days ago. So I'll check on that. I'll take a good, strong look at that."

But then, instead of stopping there, Trump went on to boast about the US military — in an apparent threat to any extraterrestrials who might be out there.

"I will tell you this: We have now created a military the likes of which we have never had before," he said, unprompted by Bartiromo. "Russia, China, they’re all envious of what we had. All built in the USA."

What are we to make of this complete non sequitur? Is Trump menacing aliens military might, as Popular Mechanics speculates?

Or is he threatening other nations that could possibly be behind the sightings of Unidentified Aerial Phenomena (UAP) by Navy pilots since 2004? It certainly wouldn't be the first time Trump has tossed hollow threats at other world powers more based on his current mood than actual evidence.

The Pentagon's task force was made public back in August with the task of investigating the sighting of such UAPs. The program had been in operation for many years before that, but remained shrouded in secrecy, as detailed in a bombshell New York Times report back in 2017.

In April, three videos of such UAP encounters were declassified by the Pentagon, with the Navy confirming that they are authentic.

Trump has said in the past that he's skeptical about the existence of UFOs. In a June 2019 interview with ABC News, Trump acknowledged that he held meetings to discuss the sightings, but said he didn't really think that UFOs were real. "Do I believe it? Not particular," Trump said.

More on UFOs: Congress Is Trying to Force the Military to Release More UFO Info

Read This Next
Consider the Source
Pentagon UFO Report Describes Radiation Burns, Other Bizarre Claims
AI Aliens
Astronomer: Aliens Will Most Likely Resemble AI if We Ever Make Contact
LITTLE GREEN MEN, LITTLE GREEN BILLS
Economics Professor: UFOs Could Be a Big Deal For the Economy
Reckless President
Report: More Than 130 Secret Service Officers in COVID Quarantine
Trump Brain
Former Astronaut Blasts Trump For Lying About NASA
More on Sci-Fi Visions
Health Revelation
Nov 22 on neoscope
Chris Hemsworth Reveals Grim Genetic Test Results, Will Take Break From Acting
Cybersecurity Dis...
Nov 13 on the byte
Insurance Company Refuses to Pay Ransom, So Hackers Start Releasing Health Records of Up To 10 Million People
PDA
Nov 9 on futurism
Elon Musk Is Faving Posts on Twitter That Are Making Our Skin Crawl With Embarrassment
READ MORE STORIES ABOUT / Sci-Fi Visions
Keep up.
Subscribe to our daily newsletter to keep in touch with the subjects shaping our future.
+Social+Newsletter
TopicsAbout UsContact Us
Copyright ©, Camden Media Inc All Rights Reserved. See our User Agreement, Privacy Policy and Data Use Policy. The material on this site may not be reproduced, distributed, transmitted, cached or otherwise used, except with prior written permission of Futurism. Articles may contain affiliate links which enable us to share in the revenue of any purchases made.
Fonts by Typekit and Monotype.