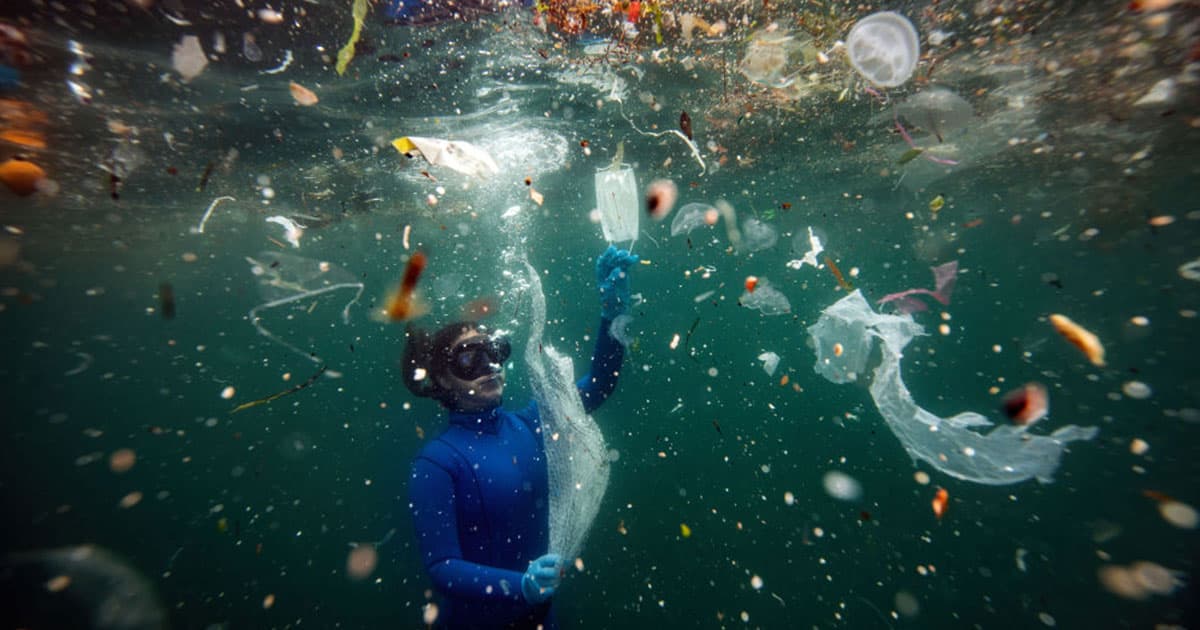 The US is the top generator of plastic waste in the world — and environmental researchers are ringing the alarm bells.

A new congressionally mandated report for the National Academies of Sciences, Engineering, and Medicine paints an ugly picture of the sheer amount of plastic waste the country produces, much of which eventually ends up leaking into the ocean.

"An estimated 8 million metric tons of plastic waste enters the world's ocean each year," the report reads, which is "the equivalent of dumping a garbage truck of plastic waste into the ocean every minute."

And the US was a huge contributor. According to the report, the US "generated more plastic waste by weight and per capita than any other nation" in 2016, producing a staggering 42 million metric tons, with the majority ending up in landfills.

By 2030, 53 million metric tons of plastic could end up in the ocean every year, which is "roughly half of the total weight of fish caught from the ocean annually," according to the report.

A lot of this plastic ends up leaking into the environment through a variety of processes including "litter, illegal dumping, permitted or unintentional discharges, and the mismanagement of exported plastic waste to other countries," according to the report.

Recycling has also failed to make a meaningful dent in the amount of plastic waste that ends up leaking into the environment. Marine and freshwater life is hit particularly hard. According to the report, scientists documented cases of 914 species getting entangled in or ingesting plastic waste across 747 studies.

Scientists are now calling for the US government to come up with an "equitable and effective interventions across the entire plastic life cycle to reduce the US contribution of plastic waste to the environment, including the ocean" to be implemented by December 2025.

Other countries have already taken some steps, including restrictions on single-use plastics, deposit-refund systems, and aggressive recycling targets.

It's a dire predicament. Nature is clearly drowning under a crushing "global scale deluge of plastic waste" that is "seemingly everywhere we look," the researchers note in their report.

Exporting extra plastic waste to other countries is also not addressing the problem as more plastic is ending in landfills overseas.

Whether US leadership will step up and implement meaningful change remains to be seen. Oil producers are increasingly relying on producing plastics as climate change concerns are driving them away of refining it for fuel.

"We can no longer ignore the United States’ role in the plastic pollution crisis, one of the biggest environmental threats facing our oceans and our planet today," Christy Leavitt, plastics campaign director for advocacy group Oceana, told The Washington Post.

"The finger-pointing stops now," she added.

Read This Next
Brands We Love
Cut Plastic Waste With a LastSwab Reusable Swab
Death by Plastic
Anti-Coke Lawsuit: "Plastic Is Set to Outweigh Fish in the Ocean"
Futurism
Shocker: Efforts to Make Oceans Cleaner Are Working (When You Aren’t Sabotaging Them)
Futurism
Stop Whining That Your Plastic Straws Are Disappearing. Be Glad They're Not Ending Up In Oceans.
Futurism
Taiwan Commits to Banning Plastic Items by 2030
More on Earth & Energy
Kermit Energy
Yesterday on the byte
Weird Storm Turns Sky Green
Shell Game
Yesterday on the byte
Florida Officials Alarmed by Invasion of Giant Snails That Can Cause Meningitis
Hypnotizing Power
Tuesday on the byte
Unrelated Teams Install "Sand Battery" and "Water Battery"
READ MORE STORIES ABOUT / Earth & Energy
Keep up.
Subscribe to our daily newsletter to keep in touch with the subjects shaping our future.
+Social+Newsletter
TopicsAbout UsContact Us
Copyright ©, Camden Media Inc All Rights Reserved. See our User Agreement, Privacy Policy and Data Use Policy. The material on this site may not be reproduced, distributed, transmitted, cached or otherwise used, except with prior written permission of Futurism. Fonts by Typekit and Monotype.