Anti-Coke Lawsuit: "Plastic Is Set to Outweigh Fish in the Ocean"

"These companies should bear the responsibility for choking our ecosystem with plastic." 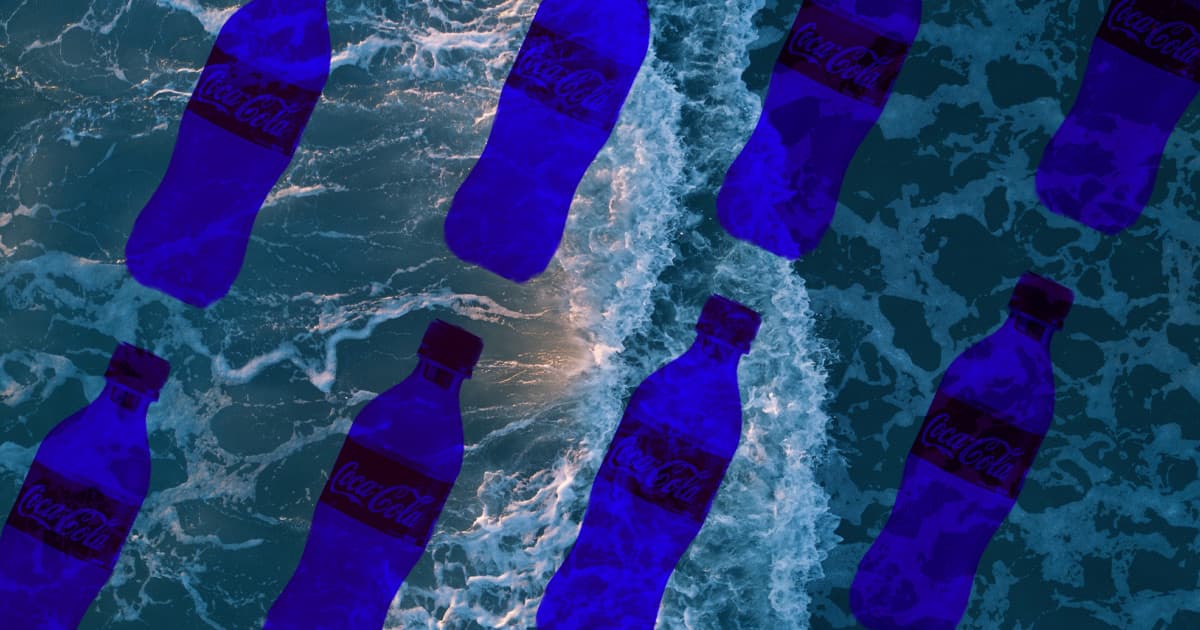 Environmental group Earth Island Institute filed a lawsuit in California last week against Coke, Pepsi, Nestlé, and a number of other plastic polluters for knowingly misleading the public about how much of their produced plastic is being recycled (and landing in the ocean instead), VICE reports.

"These companies should bear the responsibility for choking our ecosystem with plastic,” said David Phillips, executive director of Earth Island Institute, in a statement sent to The Guardian. "They know very well that this stuff is not being recycled, even though they are telling people on the labels that it is recyclable and making people feel like it’s being taken care of."

“At this rate, plastic is set to outweigh fish in the ocean by 2050,” the complaint reads, as quoted by VICE. The complaint also alleges that the ten companies named in the suit are guilty of engaging in a "decades-long campaign to deflect blame for the plastic pollution crisis to consumers."

"This is the first suit of its kind," Phillips said in a statement. "These companies are going to have to reveal how much they’ve known about how little of this stuff is being recycled."

According to 2017 numbers, the US only recycled roughly nine percent of all produced plastic with the rest ending up in incinerators (about 12 percent), or the landfill.

And that was before China, formerly America's largest importer of recycling materials, banned most types of plastic imports in 2018. The ban is causing recycling programs across the globe to stall — and landfills to pile up.

Beverage companies shot back saying that they were already working on a solution, of course:

"America’s beverage companies are already taking action to address the issue by reducing our use of new plastic, investing to increase the collection of our bottles [...], and collaborating with legislators and third-party experts to achieve meaningful policy resolutions," read a statement by an American Beverage Association spokesman, as quoted by Bloomberg.

Read This Next
Reduce, Reuse, Landfill
A Shocking Amount of US "Recycling" Goes Straight to the Landfill
Circle of Life
Hooray! The Great Pacific Garbage Patch Has Become a Thriving Ecosystem, Scientists Say
Plastic Deluge
The US Is Filling the Oceans With Shocking Amounts of Disgusting Plastic
Brands We Love
Cut Plastic Waste With a LastSwab Reusable Swab
The Plastics
New Chemistry Technique Turns Waste Plastic Into Clean Fuel
More on Earth & Energy
Brave <3
Yesterday on the byte
Bill Pledges to Keep Flying Private Jet While Speaking Out Against Climate Change
Sowloon Walled City
Yesterday on the byte
China Growing Pigs in Huge High Rise Buildings
Crust Punk
Yesterday on the byte
Scientists Discover Molten Hell Zone Beneath Earth's Tectonic Plates
READ MORE STORIES ABOUT / Earth & Energy
Keep up.
Subscribe to our daily newsletter to keep in touch with the subjects shaping our future.
+Social+Newsletter
TopicsAbout UsContact Us
Copyright ©, Camden Media Inc All Rights Reserved. See our User Agreement, Privacy Policy and Data Use Policy. The material on this site may not be reproduced, distributed, transmitted, cached or otherwise used, except with prior written permission of Futurism. Articles may contain affiliate links which enable us to share in the revenue of any purchases made.
Fonts by Typekit and Monotype.