A Shocking Amount of US "Recycling" Goes Straight to the Landfill

Recycling plastic is a "failed concept," according to a scathing new report. 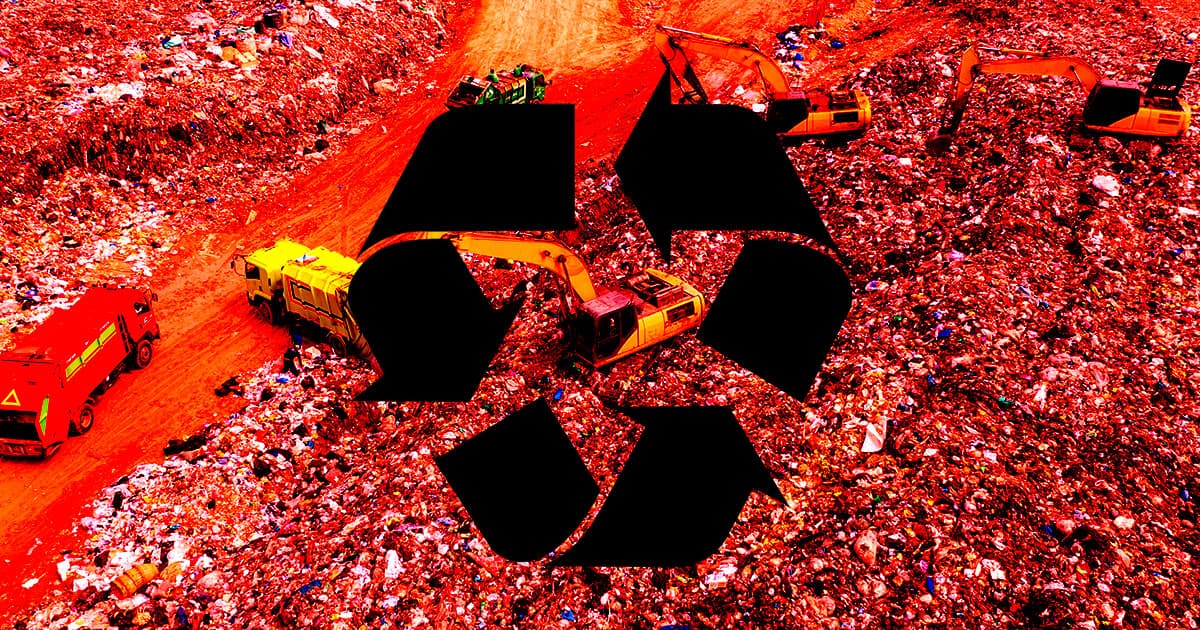 According to a scathing new Greenpeace USA report, only five percent of plastic waste generated by US households actually gets recycled.

In other words, despite our best efforts, the vast majority of plastic waste ends up in the landfill. In large part, that's due to the fact that China stopped importing plastic waste back in 2018, causing a massive pile up in western countries.

Since then, though, the US has failed to get its act together. The average American generated just over 300 pounds of plastic per person in 2021, according to the report, which amounted to an astonishing 51 million tons of wrappers, bottles, bags and more in 2021 alone.

"After more than 30 years, it is time to accept that plastic recycling is a failed concept," the report reads, arguing that a circular plastic economy remains a "fiction."

Plastic waste remains difficult to collect, the report points out, and is often mixed, making it "functionally impossible to sort." The recycling process is also expensive and environmentally harmful in and of itself, while the resulting recycled plastic can still be contaminated by impurities.

New, non-recycled plastic also is being produced at rapidly rising rates, meaning that the situation is about to get a lot worse — not better.

Worst of all, much of this plastic can actually be recycled, such as PET and HDPE, often numbered as "1" and "2." About 20 and 10 percent of those are recycled, respectively.

Yet less than five percent of plastic numbered "3" through "7," which include things like coffee cups and plastic bags, were reprocessed, according to Greenpeace.

And there isn't much optimism in terms of turning things around any time soon.

"Industry groups and big corporations have been pushing for recycling as a solution," Greenpeace USA campaigner Lisa Ramsden told Agence France-Presse. "By doing that, they have shirked all responsibility" for making sure that recycling actually works.

Ramsden called out Coca-Cola, PepsiCo, Unilever and Nestle in particular as some of the most egregious offenders.

To have a chance of making a change, Greenpeace is calling for the United Nations to push for a "refill and reuse" strategy, kind of "how the milkman used to be," Ramsden told AFP.

That's part of the UN's Global Plastics Treaty, which is set to legally bind its member countries to a trajectory to tackle the plastic pollution crisis by 2024.

"Instead of continuing to greenwash and mislead the American public," Ramsden added, "industry should support an ambitious Global Plastics Treaty that will finally end the age of plastic."

READ MORE: Only 5% of plastic waste generated by US last year was recycled, report says [The Guardian]

Read This Next
Plastic Deluge
The US Is Filling the Oceans With Shocking Amounts of Disgusting Plastic
Brands We Love
Cut Plastic Waste With a LastSwab Reusable Swab
Death by Plastic
Anti-Coke Lawsuit: "Plastic Is Set to Outweigh Fish in the Ocean"
Futurism
China Isn't Taking Our Recycling. Here's What We Could Do With It Instead.
Futurism
Europe Is Illegally Shipping Its Used Electronics to Nigeria
More on Earth & Energy
Sun Shield
Nov 23 on futurism
Scientists Increasingly Calling to Dim the Sun
Oversharing 101
Nov 21 on the byte
Bill Gates Reflects on Drinking Product of Fecal Sludge
Battery Powered
Nov 17 on the byte
Startup Says It's Building a Giant CO2 Battery in the United States
READ MORE STORIES ABOUT / Earth & Energy
Keep up.
Subscribe to our daily newsletter to keep in touch with the subjects shaping our future.
+Social+Newsletter
TopicsAbout UsContact Us
Copyright ©, Camden Media Inc All Rights Reserved. See our User Agreement, Privacy Policy and Data Use Policy. The material on this site may not be reproduced, distributed, transmitted, cached or otherwise used, except with prior written permission of Futurism. Articles may contain affiliate links which enable us to share in the revenue of any purchases made.
Fonts by Typekit and Monotype.