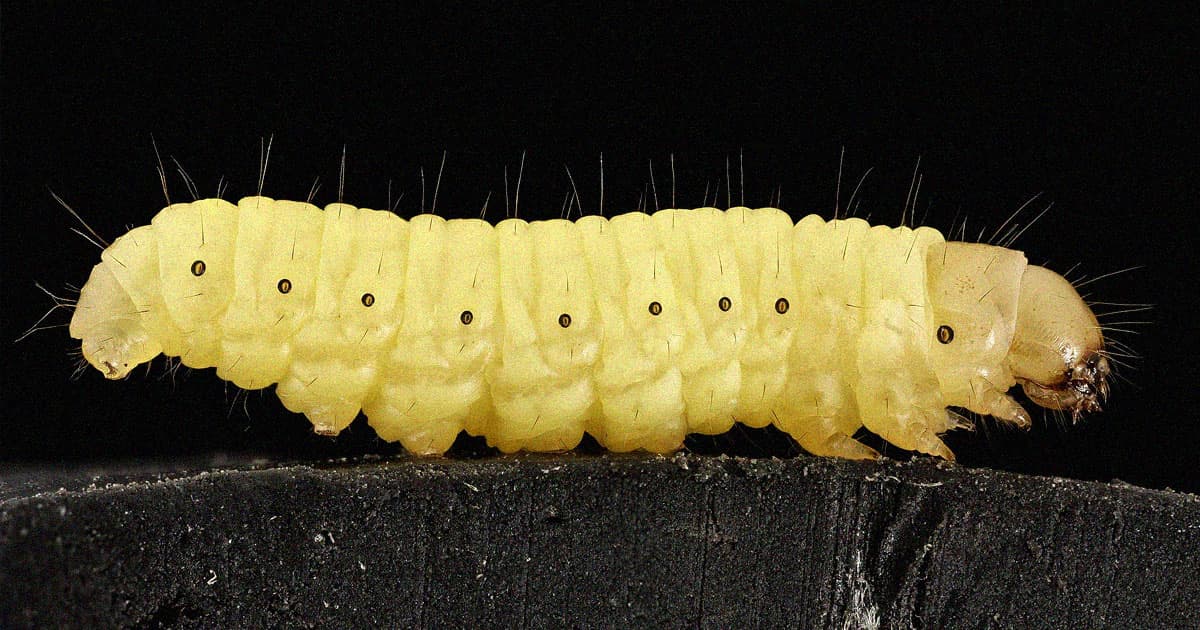 Scientists Intrigued by Worms That Break Down Plastic Really Fast

Researchers have discovered that the saliva of wax worms, the caterpillar larvae of the wax moths that feeds on beeswax in beehives, can quickly break down polyethylene, a material predominantly used in plastic bags that currently leads to immense waste worldwide.

If the humble worms could be scaled into a viable commercial process, The Guardian reports — still a huge "if" at this point — it could have a major impact on global recycling efforts, since polyethylene alone makes up 30 percent of all plastic production.

Best of all, the enzymes present in the wax worms' saliva can break down the long polymer chains of polyethylene at room temperatures, in water, and at neutral pH levels — far more convenient conditions than conventional plastic recycling methods that require high temperatures and carefully controlled acidity levels.

The researchers made the discovery by accident.

"My beehives were plagued with wax worms, so I started cleaning them, putting the worms in a plastic bag," Federica Bertocchini from the Biological Research Centre in Madrid and co-author of a new study published in the journal Nature Communications, told The Guardian.

"After a while, I noticed lots of holes and we found it wasn’t only chewing, it was [chemical breakdown], so that was the beginning of the story," Bertocchini added.

There's growing interest in using insects or other living organisms to recycle plastic waste, from fungi to super-worms that can survive by eating styrofoam.

Unfortunately, the researchers still have a lot of work to do before wax worm saliva becomes a viable solution for a growing plastic waste crisis. For one, synthesizing the chemicals is still prohibitively expensive, according to experts.

"We need to do a lot of research and think about how to develop this new strategy to deal with plastic waste," Clemente Arias, Bertocchini's colleague and co-author, told The Guardian.

More on worms: Scientists Discover "Superworms" That Can Survive on Eating Styrofoam

Reduce, Reuse, Landfill
A Shocking Amount of US "Recycling" Goes Straight to the Landfill
Oct 24
Read More
Plastic Deluge
The US Is Filling the Oceans With Shocking Amounts of Disgusting Plastic
12. 2. 21
Read More
Brands We Love
Cut Plastic Waste With a LastSwab Reusable Swab
8. 2. 20
Read More
+Social+Newsletter
TopicsAbout UsContact Us
Copyright ©, Camden Media Inc All Rights Reserved. See our User Agreement, Privacy Policy and Data Use Policy. The material on this site may not be reproduced, distributed, transmitted, cached or otherwise used, except with prior written permission of Futurism. Articles may contain affiliate links which enable us to share in the revenue of any purchases made.
Fonts by Typekit and Monotype.