"We came in there with a dream for our brand, and CloudKitchens tried to destroy it." 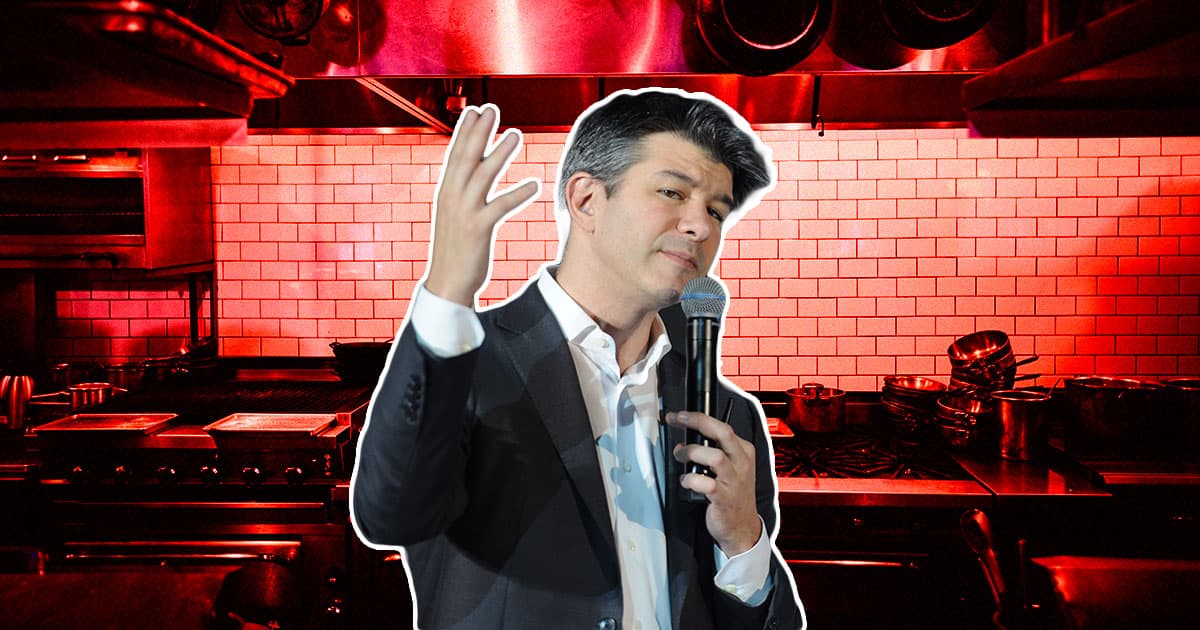 Hot on the heels of Adam Neumann and Martin Shkreli's cursed re-entries into startup world, Travis Kalanick — the former CEO of Uber who resigned from the ride-share app amid a firestorm of privacy concerns, allegations of widespread sexual harassment and gender discrimination within the company, and even the alleged mishandling of information related to a rape accusation — is back as well.

According to new reporting from the Financial Times, the fallen exec's most recent venture, CloudKitchens, is booming. Since a quiet — and lucrative — round of funding back in 2021, the startup has grown like crazy. But as per former CloudKitchens employees, Kalanick's culture apparently hasn't changed a bit. Shocking.

CloudKitchens claims to offer a lot of the benefits that previous Kalanick ventures have: freedom, support, growth and mobility, and so on. The company works by building what they ominously call "dark kitchens" or "ghost kitchens" — basically, the company rents vacant warehouse spaces, where it builds kitchen units. Restauranteurs and home chefs can work out of those kitchen cubicles, then hand off their dishes to food delivery apps. It's like taking the dynamic and personality-filled world of restaurants and, well, killing it.

Of course, this makes perfect sense for Kalanick's trajectory: disrupting an existing industry by cutting out the middlemen — and whatever worker protections have been established there — in favor of a slick app.

The result sounds miserable. According to a separate report from Insider, the so-called kitchens are pretty much non-functional, and in many cases absolutely disgusting, while the tech itself is said to be glitchy and ineffective. Unsurprisingly, CloudKitchens contracts are reportedly predatory and exploitive, and many operators told Insider that they've lost all or most of their savings trying to work out of the defunct, ineffective kitchens.

"It's been a heavy toll on our family," former CloudKitchen operator Chudi Orubele told Insider. "We have fought and crawled and scraped. We came in there with a dream for our brand, and CloudKitchens tried to destroy it."

Regardless, CloudKitchen is currently valued at $15 billion, and has spread across multiple continents. But if you haven't heard of it, that's actually intentional. According to the Financial Times, its 4,000 or so employees — which have rapidly grown in numbers since that last round of funding, from which the company raked in a mind-blowing $850 million — are asked to keep CloudKitchen off their LinkedIn profiles, and Kalanick himself has stayed out of the spotlight.

Things aren't so great for the CloudKitchen employees either, apparently. One former executive told the Financial Times that Kalanick's CloudKitchen is the "most toxic place I've ever seen or experienced," while another employee said that "if [CloudKitchen wants] to be a successful company, there needs to be a very big cultural change."

That toxic work environment was corroborated by the Insider investigation — other former employees said they felt pressured to lie to potential operators to meet their sales goals, and two told Insider that they overheard managers call restaurant operators stupid.

This sort of work culture isn't that surprising given Kalanick's dismal track record, though. After all, this is the guy who callously destroyed one industry, mistreating employees and drivers along the way, and then, after being forced to leave that one, is trying to destroy livelihoods in another. And seeing as how Kalanick's first US investor — which reportedly invested a hefty chunk of that $850 mil last November, according to a Financial Times source — is a little company known as Microsoft, other major investors may soon follow suit.

Can people change? Sure. But they don't have the incentive to do so if they can just do the same terrible things and still collect millions from investors. If one of the biggest of all dogs says Kalanick's out of the corporate penalty box, then he just might be.

More on Kalanick's legacy: If This Leak Is Real, Uber Is in Huge Trouble

Read This Next
Old Timers
Senior Citizens Are Using an App to Order "On-Demand Grandkids"
Futurism
The World of the Future Will Have Two Separate Internets, Former Google CEO Predicts
Futurism
Too Drunk to Drive? You Might Also Be Too Drunk to Ride in an Uber
Futurism
The Future Of Sharing Means You'll Never Have To Buy Anything Ever Again
Futurism
Uber's CEO Knows We Need Equality To Move The World Forward
More on Future Society
Rough
Monday on futurism
Elon Musk's Twitter Is Reportedly Failing Miserably to Contain Horrific Child Abuse Content
YouTube Propaganda
Monday on the byte
Experts Say There's Something Very Weird About North Korean YouTubers
Bird Crap
Feb 4 on the byte
It Looks Like Elon Musk Is Actually Building a Twitter Payment Platform
READ MORE STORIES ABOUT / Future Society
Keep up.
Subscribe to our daily newsletter to keep in touch with the subjects shaping our future.
+Social+Newsletter
TopicsAbout UsContact Us
Copyright ©, Camden Media Inc All Rights Reserved. See our User Agreement, Privacy Policy and Data Use Policy. The material on this site may not be reproduced, distributed, transmitted, cached or otherwise used, except with prior written permission of Futurism. Articles may contain affiliate links which enable us to share in the revenue of any purchases made.
Fonts by Typekit and Monotype.