The Tiny, Electric Transport of Tomorrow

It's a folding, laptop-charging, electric vehicle. 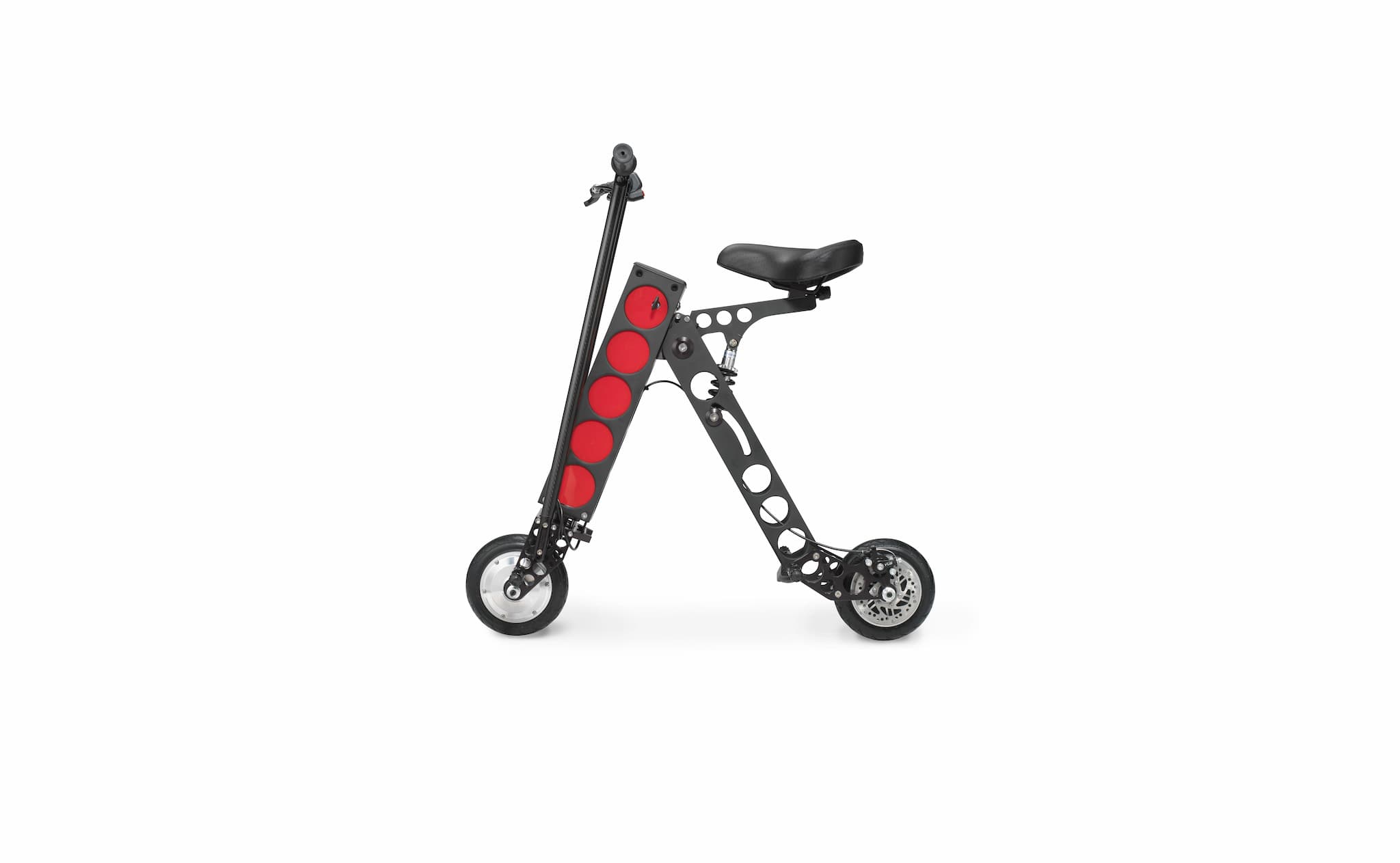 It’s estimated that some 70% of the world’s population will live in urban areas by 2025, and that’s going to require a bit of a revolution in the way that we travel. Fortunately, there’s a new kind of bike in town that can satisfy all your commuting needs (but you definitely shouldn’t call it a bike, even though it kind of looks like one).

It’s URB-E, and it’s an electric vehicle—one that you can fold up and carry with you wherever you go.

When I met with the team behind URB-E at the 2016 Edison Awards last week, they noted that size and portability are their main focal points, which is why URB-E is both small and foldable.

Evan Saunders, who is the head of sales and marketing, clarifies that URB-E is meant to seamlessly fit with any modern lifestyle: “We designed it so it’s small and compact, so it can fit literally anywhere….for some people that’s the trunk of their car. For some people that’s their office or under their desk. For others it’s the train or the bus.”

Ultimately, URB-E can be folded for transport in less than a second, making it easy to hop off and quickly jog onto the subway or into the supermarket.

But, let’s be honest, it is rather small. Which makes one wonder how well it can handle steep inclines or individuals with a larger-than-average build.

However, Saunders was quick to point me towards a video of Tom Gilfillan, sales manager at URBAN626, using URB-E to beat a cable car up a hill in San Francisco. You can see the (kind of epic) race in the video below:

Saunders continued by noting that URB-E is designed for all commutes and all commuters. “It’s got a tremendous amount of torque, not just for hills, but for people who weigh upwards of 300 pounds. NFL linebackers need to be able to get off the field and not worry about hurting themselves when commuting around wherever they’re going afterwards.”

He adds that this is why all of the vehicles are manufactured in America, and why they used 6061-T6 Aircraft Grade Aluminum and carbon fiber in the design.

Peter Lee, CEO of URBAN626, adds that making URB-E strong and reliable was ultimately one of the biggest challenges, due to its tiny frame.

He begins, “we had to figure out ways to clamp and attach the parts in ways that doesn’t rely on welds. Since it’s so light and so minimal in design, with the welds, if you used it every day, it would fail. So we used one piece of extruded aluminum.”

Saunders concludes by asserting that, in the end, URB-E isn't really about fun and games, but reliable transport: “We didn’t create this as a toy to have fun or a fashion statement. We created it to make people’s lives easier.”

However, for the record, it is rather fun to ride (they let me give it a go at the Awards).

URB-E weighs just about 13 kg (35 pounds), which is light enough that most people will be able to carry it for short distances with ease. At the present time, URB-E’s top speed 24 km/h (15 mph). Lee notes that this speed was selected because it allows URB-E to qualify as a bike in most cities, meaning that you don’t need any kind of license to drive it.

If you want to buy one, the current cost will set you back just about $1,500.

Lee asserts that the range is about 32 km (20 miles), though that will vary based on conditions. The vehicle has a 36v lithium-ion battery that charges to full capacity in 4 hours. Lee states that it also comes with a universal charger, “so you can put it in a 110 or a 220, and it charges just like a laptop.”

And he goes on to note the additional features, saying, “It also comes with a little laptop, almost like a laptop adaptor, and it charges your iPhone off a USB port. And there are attachment points are for people to make their own accessories, like a better yoga mat holder, or a better coffee cup holder, or a better wine sling.”

And honestly, a wine sling and a tiny vehicle—what could be better?

Neither Futurism nor the author of this article received monetary compensation (or any other form of compensation) in exchange for writing this piece. This interview has been slightly edited for clarity and brevity.

Read This Next
Critical Flaws
Tesla Reportedly Sold Batteries It Knew Could Catch Fire
Shuttle Butt
We Took a Ride on NYC's First Self-Driving Shuttle
Dangerous Autonomy
Video Shows Tesla Autopilot Steering Toward Highway Barriers
Tiltrotor Down
A "Tiltrotor" Helicopter May Replace the Army's Black Hawk
Easy Access
Apple Patented Facial Recognition to Unlock Your Car
More on Advanced Transport
Kapow
Feb 3 on the byte
Self-Driving Car Plowed Into Active Fire Scene, Forcing Firefighters to Smash Its Window
Netflix and Drive
Jan 30 on futurism
Mercedes Claims to Have Achieved Level 3 Automation, Beating Tesla
Battery Trouble
Jan 30 on the byte
Tesla "Spontaneously" Bursts Into Flames While Driving Down Freeway
READ MORE STORIES ABOUT / Advanced Transport
Keep up.
Subscribe to our daily newsletter to keep in touch with the subjects shaping our future.
+Social+Newsletter
TopicsAbout UsContact Us
Copyright ©, Camden Media Inc All Rights Reserved. See our User Agreement, Privacy Policy and Data Use Policy. The material on this site may not be reproduced, distributed, transmitted, cached or otherwise used, except with prior written permission of Futurism. Articles may contain affiliate links which enable us to share in the revenue of any purchases made.
Fonts by Typekit and Monotype.