We Took a Ride on NYC’s First Self-Driving Shuttle

New York City just got its first autonomous vehicles. Futurism was on the scene. 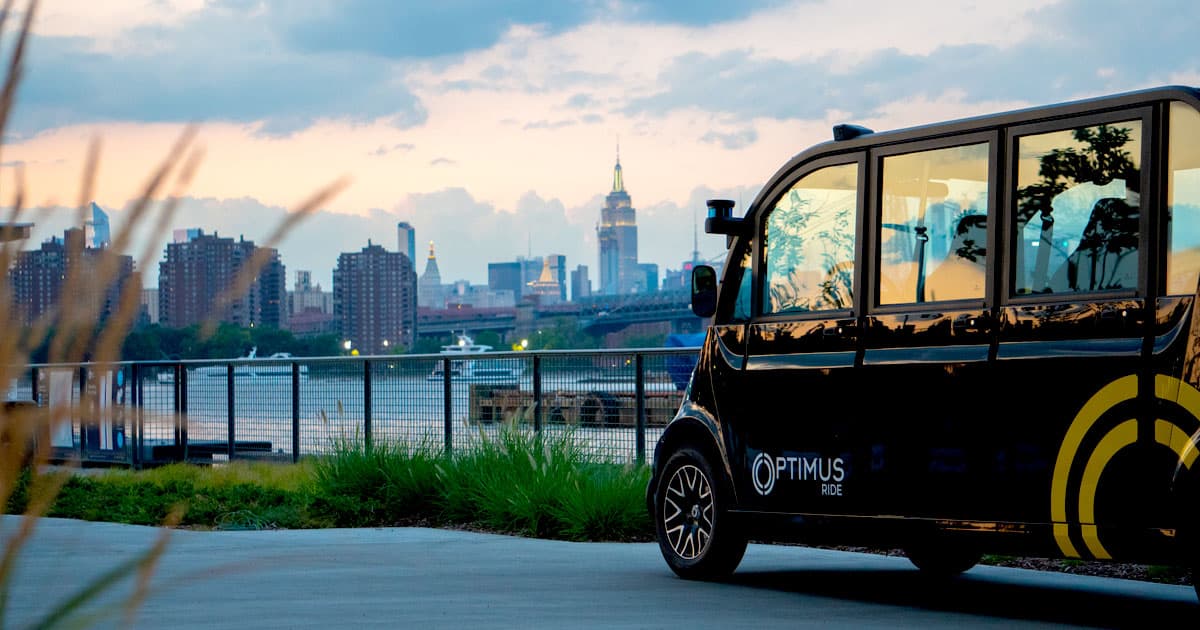 Self-driving car company Optimus Ride just debuted the first public autonomous vehicles in New York City, which will shuttle visitors around the private streets of the Brooklyn Navy Yard, a historic manufacturing hub turned tech incubator. A launch event on Tuesday evening promised rides on the company’s self-driving shuttles, so I stopped by — to kick the tires and, naturally, see if the shuttles did what they were supposed to.

I listened as VP of engineering Ruijie He explained how the shuttles detect and analyze their surroundings. He described how the vehicles combine visual recordings and LIDAR into a single data stream to get more detailed and higher-resolution input from the vehicle’s surroundings. A woman muttered “this is the future” and walked away. Her friend smiled and nodded.

He talked about edge cases: unpredictable occurrences like a driver flying through a red light or, perhaps, an absent-minded Futurism reporter wandering into the street. Humans can readily adapt to these little surprises, but for a computer programmed to follow specific rules, it’s more difficult. Behind me, a handsome man schlubbed-down in a gray Zuckerberg sweater — in 75-degree weather — warned his friends about computer vision. Which, he believes, will result in “a dystopian fucking nightmare” in which parents will lecture children about incurring the wrath of self-driving cars.

A video showed the vehicle’s software recognizing various objects as it drove past — red boxes highlight pedestrians on a nearby sidewalk while the vehicle rapidly cycled between 75 and 99 percent certainty that it was looking at a human. He, the engineering VP, said Optimus Ride could make a killing selling off its data, but that wasn’t the company’s focus. At the same time, he named several specific companies that he said would love to buy their mapping data, simulation models, and video recordings of pedestrian behavior.

The overarching message of the event was that running self-driving shuttles on private, largely closed-off streets would pave the way for street-ready autonomous cars that could eliminate the human error that causes so many fatal crashes.

“What we’re doing is showing New Yorkers how autonomous vehicles will benefit their lives,” Optimus Ride CEO Ryan Chin told the crowd, “both at an economical level and a cultural level.”

It was time to take a ride. My small cynic’s brain thought about how it might be cheaper, more efficient, and safer to install a trolley instead of AI-piloted shuttles. In fact, the Brooklyn Navy Yard already had a shuttle bus. But it was also extremely cool to be inside a vehicle that kept steering itself as the guy in the driver’s seat dramatically raised his hands like he was riding a roller coaster.

Each shuttle sat four passengers and two engineers who hogged the front row. One kept an eye on the road while the other watched a laptop that told him what the vehicle was about to do. When a woman crossed the street in front of us or a cyclist traveled in our lane, the latter muttered that the car was going to stop or swerve.

The car did what it was supposed to. The ride was a bit shaky, but it’s unclear whether that was because of the vehicle itself or because its AI system was constantly re-evaluating its surroundings. But it felt safe — we slowed down and swerved around a cyclist without leaving the lane. The cars had the entire route mapped out; each destination was already programmed in.

The engineers told us that human operators will be in the shuttles for the foreseeable future. When I asked whether that’s a matter of building trust with wary passengers or actually sorting out the technology, they responded with one word: “technology.”

We got dropped off at the ferry, where Head of Product Stephanie Wu was waiting to answer questions while we wait to hitch another ride back. We chatted about what it would take to get from self-driving shuttles on the private, quiet, and spacious roads of the Navy Yard to the chaotic, poorly-maintained streets of New York. One of the next steps, she explained, will be taking safety drivers out of the shuttles and instead having employees remotely monitor the entire fleet at once.

“It’s gonna be incremental,” she told me. “There’s a lot of human complexity.”

Wu explained that each city in which Optimus Ride operates — there are already four others — serves as a different sandbox. For instance, she said that the pedestrians here don’t like to follow the rules, so running a shuttle in the area helps them analyze and prepare for unpredictable human behavior.

One maneuver eluded the car’s AI: a human driver had to take over to execute a three-point turn while another guy standing outside directed him through the maneuver.

“There’s no fundamental reason we can’t do a three-point turn,” Wu explained, reminding me of every time I’ve told people that I let them win at something to hide my bruised ego. “We’re just not right now.”

When we got back to the party venue, the driver once more grabbed the wheel to pull over behind two other shuttles in a reserved parking spot.

The party had died down. A bartender exclaimed “we’re in the future!” to a guy who was cackling over his beer, before telling a woman asking for a La Croix that it’s now self-serve. I went back outside to watch the last few shuttles pull in.

As I drove back home to Queens, there was a dump truck driving in front of me down the BQE. The truck, full of recyclable waste, hadn’t been properly closed so it was leaving a trail of garbage in its wake. One sealed bag fell out and the cars behind it gracefully slowed down and served out of the way. Moments later, another bag fell out. By then, the highway had become more congested and there was nowhere to go for the poor driver stuck behind it, so they slowly plowed their way through the trash. The car caught the bag beneath it and dragged it for the next mile, filling the road with the smell of burnt plastic.

Even though Optimus Ride’s shuttles had no problem navigating the controlled environment of near-empty private roads, I couldn’t help but think about how it would fare on a real-world highway — where edge cases turn from thought experiments into literal heaps of trash in the way.

Read This Next
Look Ma
It’s Shockingly Easy to Drive a Tesla Without Anybody in the Driver’s Seat
Shots Fired
Ford CEO Mocks Tesla For Rolling Out Half-Finished Autonomous Driving
Trolley Problem Enhanced
Tesla Bros Are Freaking Out Right Now About the New Full Self-Driving Beta
Empty Seat
Waymo Ditches Human Safety Drivers in Its Self-Driving Taxis
Mixed Feelings
Uber’s “Safety Driver” During Deadly Self-Driving Car Crash Charged With Negligent Homicide
More on Advanced Transport
Price Check
Yesterday on the byte
Tesla Just Scrubbed the Cybertruck Prices, Specs from Its Website
Redirecting...
Thursday on the byte
Dozens of Self-Driving Cars Getting Stuck on Same Dead-End Street
Like a 6 9
Oct 8 on the byte
Elon Musk Says He’s “Dying” to Develop a Supersonic Electric Jet
READ MORE STORIES ABOUT / Advanced Transport
Keep up.
Subscribe to our daily newsletter to keep in touch with the subjects shaping our future.