A "Tiltrotor" Helicopter May Replace the Army's Black Hawk

It borrows the best elements from planes and helicopters. 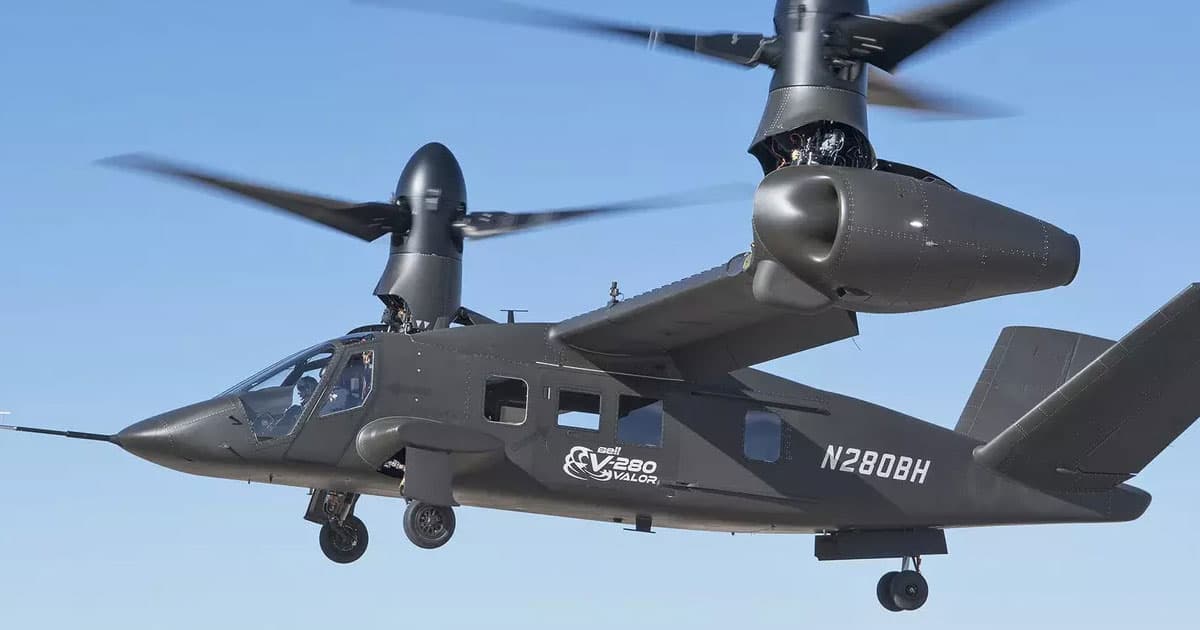 The U.S. Army is currently developing replacements for its famous Black Hawk helicopter, which has been a mainstay of the military since it was developed in the 1970s.

Decades later, the Black Hawk is too slow and has too short a range to be practical. One of the frontrunners to replace it borrows the best from planes and helicopters — with two rotating wings, each of which houses a propeller allowing for vertical take off, according to Ars Technica.

The helicopter, called the V-280 Valor and built by a division of aviation manufacturer Textron has the functionality of a sort of plane-helicopter hybrid that could travel faster and farther than the Black Hawk. It also improves on past tiltrotor designs by leaving the rest of the engine in place, cutting down on cost and the mess kicked up by the rotating blades, Ars reports.

But that's not the only design the military is considering — another prototype, Sikorsky-Boeing's SB-1 Defiant looks more like a typical helicopter but uses two counterrotating propellers stacked on top of each other to increase its speed.

In particular, the Army needs a helicopter well-suited for recon missions overseas, hence these two prototypes' focus on top speed.

There's no indication yet which of the two will get picked up by the armed forces, but we look forward to the new movies like "Tiltrotor Down" that could follow.

READ MORE: Forget Airwolf: One of these is the Army’s next assault “helicopter” [Ars Technica]

More on helicopters: You Can Fly DARPA's Idiot-Proof Helicopter With 45 Mins of Training

Read This Next
Critical Flaws
Tesla Reportedly Sold Batteries It Knew Could Catch Fire
Shuttle Butt
We Took a Ride on NYC's First Self-Driving Shuttle
14 Dead
Russian Sub That Caught Fire Possibly Sent to Cut Internet Cables
Bumper Drones
Cargo Drones Have One Problem: Not Crashing Into Things
Dangerous Autonomy
Video Shows Tesla Autopilot Steering Toward Highway Barriers
More on Advanced Transport
Stay Away
Yesterday on the byte
New SUV Features Electrified Door Handles and Pepper Spray Guns
No Fly
Monday on the byte
The TSA's Entire No Fly List Appears to Have Just Leaked
Driven Down
Jan 14 on the byte
Tesla Slashes Car Prices Up to 20 Percent
READ MORE STORIES ABOUT / Advanced Transport
Keep up.
Subscribe to our daily newsletter to keep in touch with the subjects shaping our future.
+Social+Newsletter
TopicsAbout UsContact Us
Copyright ©, Camden Media Inc All Rights Reserved. See our User Agreement, Privacy Policy and Data Use Policy. The material on this site may not be reproduced, distributed, transmitted, cached or otherwise used, except with prior written permission of Futurism. Articles may contain affiliate links which enable us to share in the revenue of any purchases made.
Fonts by Typekit and Monotype.