The Quest for a Theory of Everything: The Search for the Secrets of the Universe

The LHC is pulling back the veil on the mysteries of the universe. 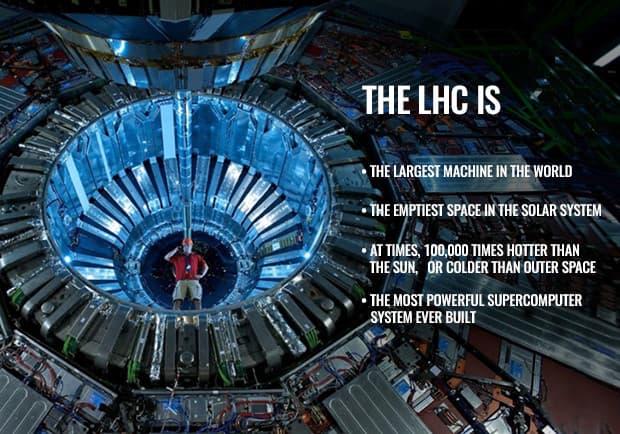 In 2013, one of the most important events in modern science occurred: we discovered the Higgs Boson. For those of you not unfamiliar with the topic, the Higgs is the long sought missing piece of the Standard Model of particle physics. Until its discovery, we couldn't explain how certain force-carrying particles—such as those that carry the weak force—gained mass.

The Higgs, by clarifying how these fundamental particles (which should be massless) obtain their mass, brought us one step closer to a complete picture of the smallest building blocks of matter and their various interactions. The discovery was made by CERN's Large Hadron Collider (LHC), one of the most amazing (and powerful) pieces of technology ever developed.

And since the discovery of the Higgs, the LHC has been very, very busy.

In 2015, after a downtime of nearly 27 months while scheduled updates were completed, the LHC started exploring a new frontier in physics, as it began delivering physics data for the first time in over 2 years...and it was operating at an unprecedented energy of 13 TeV.*

This extra power allows the LHC to probe the mysteries of dark matter (believed to make up about a quarter of the universe), antimatter (such as nature’s preference for matter over antimatter, without which we would not exist,) extra dimensions, and exotic particles (which might only be exposed through interaction with the Higgs field).

In short, the LHC has already revolutionized physics, and it is set to do much, much more.

Indeed, after its restart, it didn't take long for this amazing piece of technology to begin breaking into new frontiers in physics. Just ten days after the three-year anniversary of CERN’s discovery of the Higgs boson, and only a month after it started its second run, researchers on the LHCb experiment at CERN announced that they found a new exotic class of particles—pentaquarks.

But as amazing as these discoveries are—they are just the beginning.

Over the coming months and years, the LHC will likely uncover a whole new dark sector of physics, revealing currently unknown particles and other cosmic mysteries. With this in mind, the National Science Foundation is teaming with K2 Communications to bring you the Secrets of the Universe.

This is an IMAX  3D film that will play at museums and science centers across the globe. It will delve into some of the greatest questions faced by today’s scientists. Focusing on dark matter, parallel universes, and extra dimensions, the film will cover where we have been and where the LHC might take us next. In this respect, the Secrets of the Universe will provide an overview of the breakthrough work that is being done by the world’s leading physicists at the planet’s most extraordinary research lab: CERN.

This is an opportunity for some amazing educational outreach, as the movie will entertain, educate, and inspire old and young alike. And who knows, it may even help create the next generation of physicists.

But they need your help.

Secrets of the Universe has launched a crowdfunding campaign in order to complete the film. And according to Rolf Landua, the Director of Education at CERN, the significance of this project cannot be overstated: “Secrets of the Universe is a crucial project that will fascinate young people and engage the general public in one of the most profound scientific endeavors of humankind in the 21st Century. The film will become a must for science teaching, since it will show how human ingenuity was able to reconstruct the cosmic evolution—from a small point to an entire Universe—by observation and experiment.”

So please, take a moment to join the fight for science, and help unlock the secrets of the universe.

Help science, and help to increase scientific literacy, by offering your support here.

*A TeV is a unit of energy used in particle physics. 1 TeV is about the energy of motion of a flying mosquito. What makes the LHC so extraordinary is that it squeezes that energy into a space about a million million times smaller than a mosquito.

Read This Next
Atom Smash!
Vast New Particle Accelerator Would Dwarf Large Hadron Collider
Nap Time
The Large Hadron Collider Just Shut Down
Futurism
CERN Researchers Are Planning to Trap and Truck Antimatter From One Facility to Another
Futurism
"Holy Grail" Particle: New Physics Research Shows Tetraquarks Must Exist
Futurism
Physicists Made the Most Precise Measurement of Protons' "Magic Moment"
More on Hard Science
Tractor Beam
Jan 26 on the byte
Scientists Build Working Tractor Beam, Although It's Comically Tiny
Having a Blast
Jan 18 on the byte
New Study Shows Where You Should Hide to Survive a Nuclear Attack
Offworld Amino
Jan 15 on the byte
Scientists Find Building Blocks of Life in Meteor That Smashed Into Family's Driveway
READ MORE STORIES ABOUT / Hard Science
Keep up.
Subscribe to our daily newsletter to keep in touch with the subjects shaping our future.
+Social+Newsletter
TopicsAbout UsContact Us
Copyright ©, Camden Media Inc All Rights Reserved. See our User Agreement, Privacy Policy and Data Use Policy. The material on this site may not be reproduced, distributed, transmitted, cached or otherwise used, except with prior written permission of Futurism. Articles may contain affiliate links which enable us to share in the revenue of any purchases made.
Fonts by Typekit and Monotype.