Everything You Need to Know about the Higgs Boson 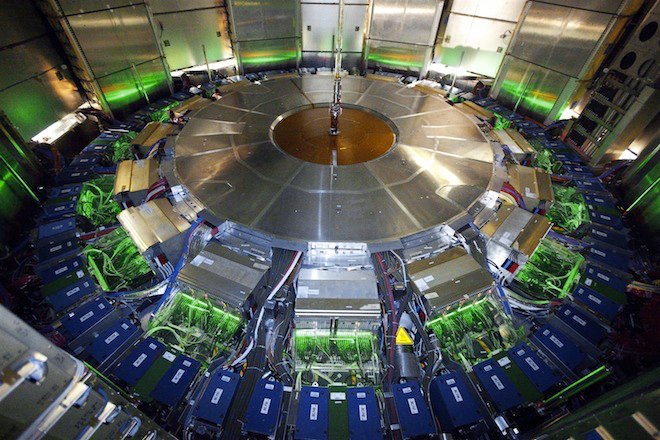 Today, CERN announced that with near certainty, the boson discovered through particle collisions at the Large Hadron collider in Geneva, is indeed, the long sought after Higgs Boson particle — the last missing piece of the Standard Model of Particle Physics.

We here at FQTQ have been following the story since the initial announcement was made (back in July), in addition to keeping all of you caught up on the progress that has been made pouring through the data collected from billions of collisions at CERN.

Haven’t been following news about the higgs? Lets overview, shall we?

“What is particle physics?”

Thanks to quantum physics, we now know that space isn’t empty. Besides ordinary matter like protons, electrons and neutrons that comprise the building blocks of all matter, the universe is abound with quantum fields and tiny elementary particles that pop in and out of existence. Particle physics is the study of all of the individual subatomic particles and forces that interact with them.

“What is the standard model?”

In the world of particle physics, subatomic particles are difficult to observe because of their size. They are smaller than an atom and the wavelength of visible light, so the only way we can detect and observe their behavior is by smashing the atomic nucleus of particles together at intense speeds (close to the speed of light), which generates vast amounts of exotic particles that are only created at high energies. These collisions resemble the conditions physicists believe existed during the time of the big bang. Thanks to particle accelerators like the Large Hadron Collider, the Relativistic Heavy Ion Collider and the (now defunct) Tevatron circular particle accelerator, physicists have made a lot of progress in designing a “theory of everything.” This theory postulates how all the subatomic particles in the universe operates and how they interact to comprise the Universe as we know it. One of the most complete models that comes anywhere near producing a “theory of everything,” is the Standard Model of Fundamental Particles and Interactions, which describes how particles and forces interact. The standard model also includes an explanation for 3 of the 4 fundamental forces of nature on a subatomic scale.

The four fundamental forces of nature:

Here’s where the Higgs boson comes into play: We don’t understand why certain particles have mass whereas it’s believed that all force carrying particles should NOT have mass. To the contrary, we’ve learned that particles that carry weak force do have mass, by why do the would-be massless fundamental particles have mass? (I know that was a total mouth full) 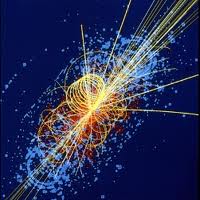 The Higgs boson would help explain the means in which these particles in the universe obtain their mass. Peter Higgs (the physicist the elusive particle is named after) developed a theory that explained how particles that carry electromagnetic force or the weak force, can have different masses as the universe gradually cooled. His suggestion was that particles like protons, neutrons and quarks gain mass by interacting with an invisible electromagnetic field, called a “Higgs field.” Some of the particles are able to cut through the Higgs field without picking up mass, while others get bogged down (similar to pulling a beaded necklace through a tub of honey), thus accumulating mass. If true, this “invisible” field should have an associated particle called the Higgs boson- a particle that supervises interactions with other particles and the electromagnetic “Higgs” field- exchanging virtual Higgs particles with it.

Since the Higgs boson quickly decays into other more stable particles, it’s far more difficult to observe than other subatomic particles created in particle accelerator collisions. Mimicking the conditions similar to that of the big bang, when it’s created, it’s believe to exist only for a septillionth of a second, making the work of sorting through the data collected from trillions of collisions, a tedious process.

When the announcement was made in July, it was revealed that they have observed a new boson with a mass 125.3 GeV +/- 0.6 at 4.9 sigma, (the “golden standard” of scientific discoveries) which suggested that the Higgs boson has been confirmed with a 99.99997 percent chance with the mass range of 125 Gev (GigaelectronVolts). However, it is very rare that anything concerning physics is THAT cut and dry.

A Hiccup in the Search for the Higgs:

A few months after the announcement, physicists revealed a surprising find.. the boson observed at CERN appears to decay in two different ways. In one of the two scenarios, the particle decays into TWO photons, with a mass of 126.6 gigaelectronvolts (GeV). In the second case, the particle decays into four leptons and has a mass of about 123.5 GeV. — leading some to believe we are actually observing two different Higgs particles. Others believe it may just be a statistical coincidence since the difference between the two is miniscule. 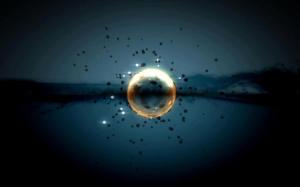 So, why does the weight of the particle matter? As it turns out, imparting that much mass with the Higgs Boson and the additional mass of top quark particles, suggest that the vacuum of our universe may be inherently unstable, existing in a perpetual ‘metastable’ state, which we have discussed before. Many physicists have been discussing the possibility of our universe teetering on the edge of stability for many years now. Especially physicists Michael Turner and Frank Wilczek, who published a paper in Nature back in 1982 that suggested this unpleasant scenario; “without warning, a bubble of true vacuum could nucleate somewhere in the universe and move outwards at the speed of light, and before we realized what swept by us our protons would decay away.”

This has been dubbed the “big slurp” — one of the many doomsday hypotheses that have been laid out in front of us for the ultimate destruction of our universe.

So you can see why such a confirmation about the properties of the boson have not been entirely forthcoming up until this point. However, it appears as if this time, physicists are more comfortable asserting that they are correct in their findings.

According to Professor Dave Charlton of Birmingham University,  who is a spokesman for the LHC’s Atlas experiment: “The spin-zero finding tells us it is a Higgs particle but the question of whether it is the Standard Model Higgs or a more exotic particle remains open. We’ve only just started down that road, although at the moment it is consistent with the Standard Model,” Professor Charlton said.

It’s safe to say, this isn’t the last we’ll hear of concerning the Higgs, which is a good thing. We need all of the juicy findings we can get, as the Large Hadron Collider will be out of commission for the next two years (for equipment upgrades). Stay tuned!