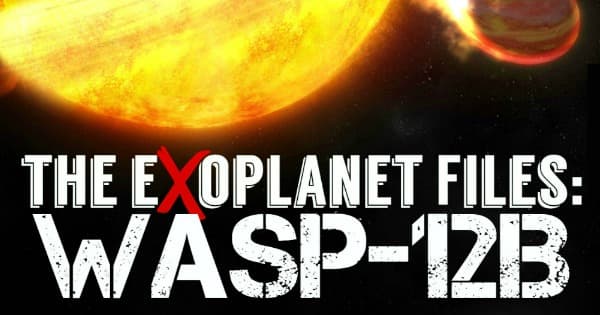 Wasp-12b has to be one of the most fascinatingly alien planets out there (even for an alien world, it's bizarre); imagine Earth and then picture the polar opposite. Only then can you begin to understand the extent of this planet's weirdness (in case I haven't made it clear enough, to reiterate, even for an alien world, Wasp-12b is foreign).

These quirks make Wasp-12b the perfect candidate for our brand new segment, "The eXoplanet Files." Click on the image to expand. Also, be sure to let us know which exoplanet you'd like us to feature next.

(Note: See the toggle at the bottom of this write-up for a plain text version of the infographic. Information sources are available there too)

See our articles on WASP-12b:

WASP-12b can be found around 870 light-years from Earth in the constellation of Auriga. Found in 2008 using the transit method, it orbits a magnitude 11 yellow dwarf star, known simply as WASP-12 [1]. Its mass and radius are quite similar to that of the Sun, but that's where the similarities end.

It orbits its parent star from a distance of 2.1 million miles (3.4 million km)—just 1/44th of the distance between Earth and the Sun. Given the close proximity, it zips around WASP-12b in a little over one Earth day (meaning a year on Earth is a day on WASP-12b) [2].

The partnership has also had a really strange affect on the planet itself. Tidal forces exerted on WASP-12b by its parent star have ultimately caused the planet's atmosphere to swell dramatically, giving it an egg-like shape [3].

Using a powerful tool mounted on the Hubble Space Telescope—called the Cosmic Origins Spectrograph (COS)—astronomers were able to come up with an accurate estimate for its mass.

Ultimately, it was revealed that the planet is four times larger than Jupiter in radius, and it has approximately 40 percent more mass. [4]

Given this estimate, the planet is believed to belong to the hot-Jupiter class of exoplanets.

Much in the same way that the gravity of Jupiter heats up Europa's interior, and gives Io its volatile volcanic nature, a process called tidal heating—whereby the gravitational pull of another object (be it a star, a close companion, or a moon) creates friction—has heated up WASP-12b dramatically.

Current estimates predict it has surface temperatures of 2,500 K (2,200 °C), which makes it one of the hottest known planets in existence (it may even be the hottest ever found). [5]

WASP-12b has a substantial amount of carbon (carbon monoxide and methane, specifically) present in its atmosphere, but models and calculations show that its interior is likely carbon-rich as well. [6] Much of this carbon could very well manifest in the form of pure diamond (some have suggested it could be way more exotic than anything we've ever seen on Earth).

The ratio of carbon-to-oxygen in our solar system is 1 to 2, yielding large quantities of elements and minerals like quartz, iron, nickel and silicon (what Earth's mantle is composed of). Whereas, in the case of Wasp-12b, the carbon-to-oxygen ratio is > 1 (greater than one). Astronomers have long theorized that planets of this nature exist, but Wasp-12b was truly the first of its kind. [7]

If that wasn't tantalizing enough. in 2014, astronomers revealed that WASP-12b—along with four other equally hellacious worlds—has traces of water in its superheated atmosphere. [8]

Living in such an extreme environment has taken a huge toll on Wasp-12 and Wasp-12b alike. Presently, the planet expels approximately 6 billion metric tons of mass per second through solar winds. NASA explains that "It is so extended that the planet's radius exceeds its Roche lobe, the gravitational boundary beyond which material would be lost forever from the planet's atmosphere." [9]

As such, we are seeing this planet at a pivotal point in time. Astronomers estimate that in 10 million years (a small blip in time, cosmologically speaking), the planet will no longer exist.

A study conducted in 2014 also revealed something rather unexpected. Instead of looking and behaving in ways most 2 billion-year-old stars do, Wasp-12 appears to be aging at an accelerated speed [10], all thanks to this rather unlucky planet.