How An Unusual Planet Makes A Star Act Deceptively Old 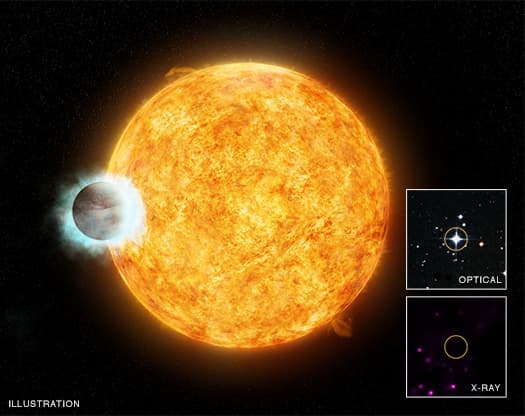 If you need further proof that the relationship between a planet and star is a complicated one, this strange system, which lurks just 330 light-years from Earth, will remove any lingering doubts. Weighing in with a total mass of 10 Jupiter-sized bodies, astronomers have long known that Wasp 12-b (a hot-Jupiter exoplanet) is unlike any we've ever seen before. Not only is it unusually large and close to its parent star (it's one of the most massive planets ever discovered, and it's one of the closest to its host star), over time, we've seen that there's no love lost between the pair.

This information has been common knowledge for some time; however, we never quite understood how these dynamics play out on a large-scale until recently. New research shows that Wasp 12-b's star, which is about 2 billion years old (much younger than our middle-aged star), is being affected by the planet in unheard-of, dramatic ways. Namely, it seems to be aging the star at an accelerated rate.

Astronomers derive an age approximation for a star by looking at the its mass and its metal content. Larger stars burn through their gas reserves more quickly than smaller ones, but the result is the same in both big and small stars—as stars fuse lighter elements into heavier ones, the star's spectra changes. We can determine a star's age by measuring precisely how much of its composition is metals ('metal' is generally anything heavier than hydrogen, helium and lithium) and see how quickly its fuel is being spent. This ultimately tells us how long the star has been in the nuclear fusion business (however, it's important to note that these estimates are less reliable for stars that aren't associated with globular clusters).

According to the team — led by Ignazio Pillitteri of the Istituto Nazionale di Astrofisica (INAF)-Osservatorio Astronomico di Palermo — there are numerous things that can give us a faux estimation of a star's age. The star's changing rotational rate is one way to skew our estimations. This is because rotational rates start to decline after a certain point, which impacts many of a star's characteristics, including solar activities and the star's x-ray emission (x-ray emission is a key phenomena for younger stars; older stars, on the other hand, don't see nearly as much action).

With this in mind, in a new study, the team probed the Wasp system's x-ray signature. They were startled to learn that there were no x-rays to be found, which indicates that the star is seeing little solar activity (x-rays are synonymous with all sorts of cosmological activity). Given its age and how much activity we generally see in nearly identical stars, the team concluded that WASP-18 is about 100 times less active than expected.

"We think the planet is aging the star by wreaking havoc on its innards," according co-author Scott Wolk (from the Harvard-Smithsonian Center for Astrophysics in Cambridge, Massachusetts). Wolk suggests that, because the planet is so close to the star, tidal forces that cause convection (the transference of heat) within the star weaken increasingly over time. Since a star's magnetic field is an artifact of internal convection, the planet ultimately influences this field and, thus, causes the star to give the impression that it is older — and by proxy, less active — than it truly is (and should be). To expand, co-author Salvatore Sciortino, also of INAF-Osservatorio Astronomico di Palermo in Italy, states:

The planet's gravity may cause motions of gas in the interior of the star that weaken the convection. This has a domino effect that results in the magnetic field becoming weaker and the star to age prematurely.

As a final note, Things are slightly more complicated with this star, as its convection zone (where the action happens) is more narrow than a large fraction of other stars. Consequently, its more susceptible to experiencing extreme tidal forces. Moreover, this new discovery could yield an answer to another mystery: Why, in addition to carbon, the star harbors an unusually large amount of lithium — an element that tends to be abundant in much younger stars. Over time, convection naturally causes lighter elements (like lithium and hydrogen) to pool into the star's innermost regions, where they eventually meet destruction at the hands of nuclear fusion (the process powering all stars). If you dial back convection, the lithium no longer propagates from the outer regions to the inner ones, thus these reactions never happen or are greatly reduced.

The last part is also partially why red-dwarfs — the oldest and most prevalent type of star in the universe — can live much longer than main-sequence stars. In one such star lacking in a radiative zone, convection mixes the star's hydrogen and helium content throughout its interior evenly, preventing fuel from building up in the core until the well runs dry. Normally, this is the point at which medium-mass stars balloon into red giants, but these lower-mass stars seem to skip this phase all together. In fact, the process is so effective, astronomers believe red dwarfs can survive up to ten trillion years before dying.

All in all, astronomers keep demonstrating that WASP-12b seems to be one-of-a-kind (at least as far as our body of knowledge goes). Sadly, the planet will be consumed at some point in the not-too-distant astronomical future (about 10 million years from now). As I write this, the star's stellar winds are stripping over 6 billion metric tons of mass from the planet each second. At some point, there won't be anything left of its magnetic field or atmosphere, that is, assuming the planet doesn't get swallowed whole first.