WASP-12b is the Planet of Diamond and Death 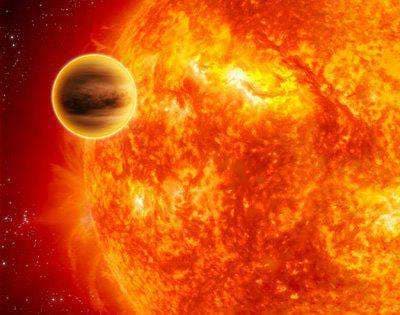 Earth goes by many nicknames: Terra, the Blue Marble, Pale Blue Dot, Gaia and simply the "blue planet." Keeping with the tradition, some may call this planet—what remains of it, anyway—the bling planet. Meet WASP-12b: an extreme exoplanet found within the constellation of Auriga.

If one word was used to sum it up, it would be "unpleasant." You see, for starters, WASP-12b orbits its mother star from the uncomfortably close distance of 2.1 million miles (3.4 million km)—just 1/44th of the distance between Earth and the Sun (93 million miles/150 million km). Because of the close proximity, this bad boy makes a full orbit in a little over one Earth day—meaning that a day on Earth is a year on WASP-12b.

Additionally, the atmosphere has begun to swell dramatically, causing the planet to distort into an egg-like shape. Moreover, the star has started to eat away at its envelope via stellar winds, 6 billion metric tons of mass per second is lost to space forever, so it's pretty much a dead planet walking. We're literally watching the last 10 million years of its life on a delay (since it's 870 light-years distant, we're seeing it as it appeared 870 years ago),  before its parent star has it for a light snack.

An Expensive Place to Live:

It gets even better too: Remember how I referred to WASP-12b as "the bling planet?" Well, that's because the rocks in native extraterrestrial driveways could be composed of pure carbon, like diamond or graphite. That's right, diamond could be as common on WASP-12 b as limestone is on Earth.

Due to the high concentration of carbon in the planet's atmosphere (which is primarily composed of carbon monoxide and methane), scientists also believe that its core may be solid, with diamond far more abundant than the silicon and other oxygen-rich materials found in Earth's core. "The high carbon-to-oxygen ratio indicates a carbide or diamond interior rather than the silicate geology of the Earth," said Nikku Madhusudhan, a Princeton astrophysicist.

What we're seeing on WASP-12b could be the same fate the planets in our solar system are in for when our Sun makes the transition from a main-sequence star to a red giant... minus all of the diamond and bling.