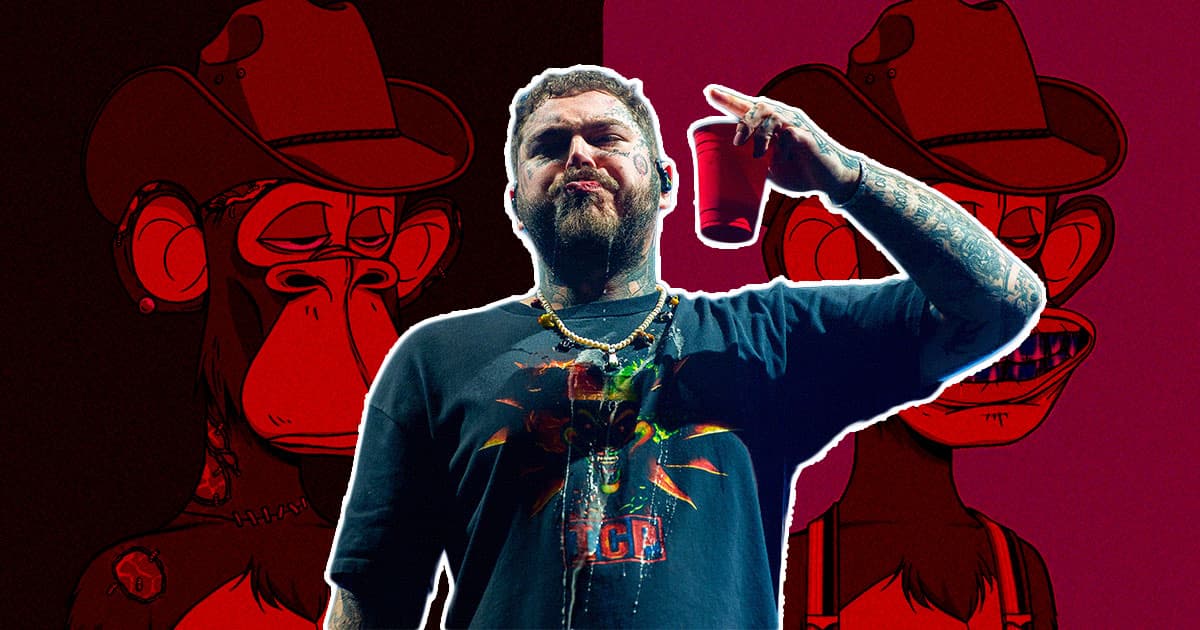 And to think that crypto was less weird before.

And to think that crypto was less weird before.

A new music video from mumbly rapper-slash-crooner Post Malone features a product placement cameo that literally no one asked for.

In the beginning of the James Bond-inspired video for Postie's latest single, "One Right Now," the artist is seen purchasing a Bored Ape Non-Fungible Token (NFT), for some reason, just before he and The Weeknd's Abel Tesfaye join a highly choreographed gunfight.

In one of the more awkward examples of music video product placements since DJ Khaled's infamous "Hold You Down," Malone is showing off his very obvious sponsorship deal with the MoonPay cryptocurrency trading app.

In doing so, the "White Iverson" singer has joined the increasingly-cringy ranks of celebrity NFT enthusiasts and delved into the arguable scam that is the NFT world.

Bored Ape, the NFT Malone was filmed purchasing on the crypto app that's paying him, is itself a perfect microcosm of the weirdness that is NFTs and the growing cult surrounding it.

Sold on the Ethereum blockchain, these street art-esque primates have become a bizarre status symbol in some crypto circles. They not only have their own social club — the "Bored Ape Yacht Club" — but also held a real life gathering, Ape Fest, in New York City.

Though it's very easy to laugh at the strangeness of it all, we'd be remiss if we didn't list off just how many big-name celebrities performed at Ape Fest, which itself was part of the NFT.NYC conference that featured Reddit co-founder Alexis Ohanian as a keynote speaker.

The November 4 lineup, as Input noted in a dispatch from Ape Fest, included The Strokes, Chris Rock, Beck, Questlove, and Aziz Ansari.

Anyway, it all tracks. At the intersection of the wild west world of NFTs, the insularity of hypebeast culture, and the enduring cult of celebrity worship lies Post Malone, himself a divisive figure as an uberpopular white rapper in a post-Macklemore world.

And who knows — maybe next year he'll tour the metaverse with the new NFT supergroup that just got a record deal with Universal.