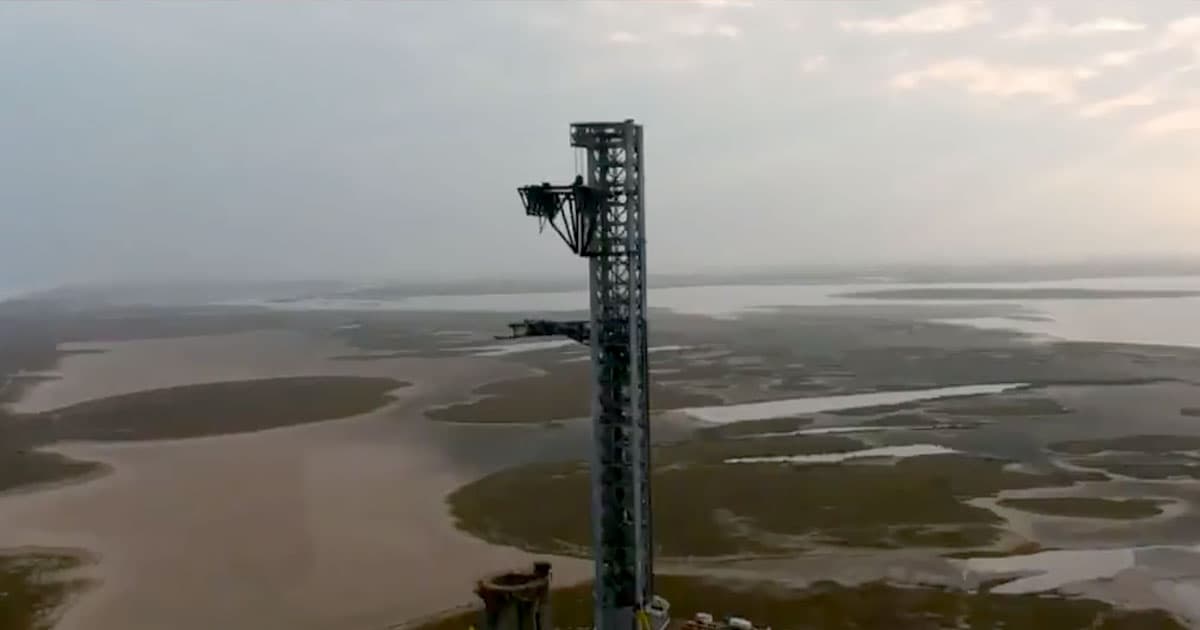 SpaceX Tests Giant "Chopsticks" For Catching Starship as It Lands

This thing is absolutely massive.

This thing is absolutely massive.

SpaceX has tested out its massive "chopsticks" tower, a gigantic structure designed to guide the space company's Starship and Super Heavy booster during launches — and catch them upon their return to the surface.

The structure has to be tall enough to accommodate the spacecraft stacked on top of its equally colossal booster, which amounts to over 400 feet of stainless steel, dozens of rocket engines, and hexagonal heat shields.

Late Sunday evening, SpaceX CEO Elon Musk shared a drone video on Twitter showing the entire looming structure, in the otherwise flat expanse of South Texas, during a test run. A massive steel bar appeared to simulate the weight between the two chopsticks, according to Teslarati's breakdown of the action.

A separate time-lapse shared by NASASpaceflight reporter Michael Baylor shows the structure spring to life, with the chopsticks being lowered via what appears to be a pulley system.

The test is a gargantuan engineering feat come to life, a testament to the hard and tireless work that went into its construction and development — and perhaps a sign that Starship's first orbital test flight is right around the corner.

A set of screw rods on the structure could allow SpaceX to move the Super Heavy booster further or closer, while a separate arm could allow the company to transfer the booster from its landing pad next to the tower back onto the launchpad.

Only time will tell SpaceX's next move for the colossal structure. The company could perhaps attempt to simulate the full weight of both Starship and Super Heavy combined, Teslarati suggests, or it could try to stack its Starship S20 and Super Heavy B4 prototypes on top of the tower's launch mount to see if everything fits together properly.

Regardless, we're in for a wild ride.