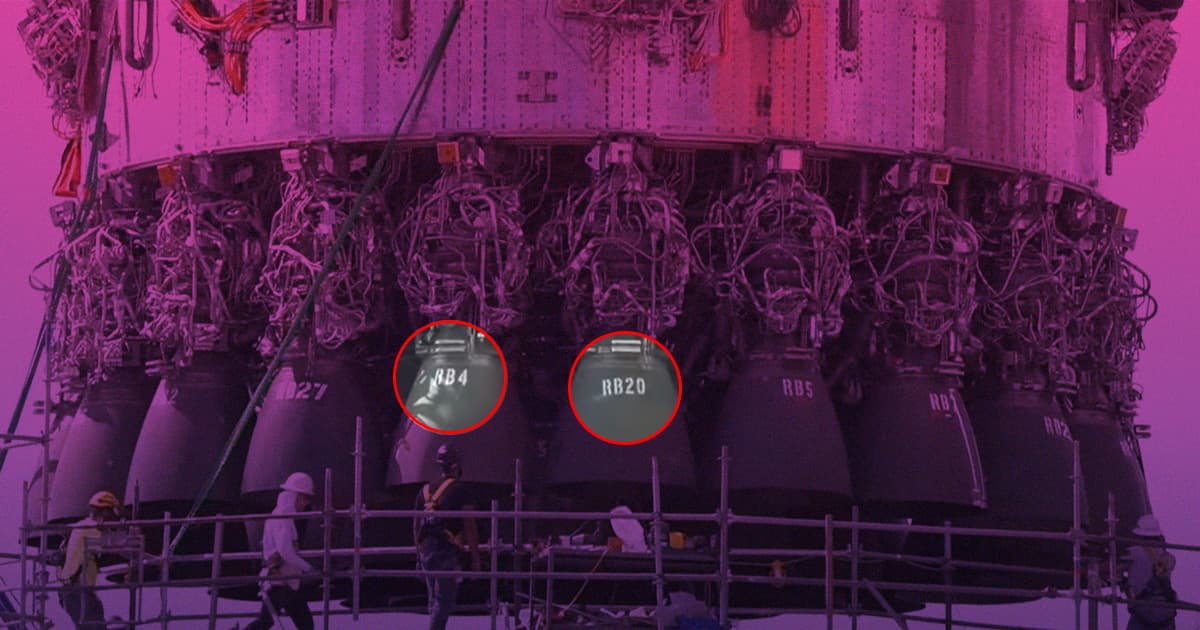 Was That You, Elon?

It seems that SpaceX CEO Elon Musk has once again professed his love for the weed number.

Two adjacent Raptor engines recently installed on the space company's Super Heavy booster prototype on Wednesday were numbered "RB4" and "RB20," as spotted by one eagle-eyed Twitter user, who was following yesterday's events on a live stream courtesy of NASASpaceFlight.

Together the engines form 420, a number of note in marijuana culture — and which Musk seems to be absolutely obsessed with.

In fact, SpaceX is planning its first orbital test launch of Starship to involve a Super Heavy dubbed Booster 4 and a Starship prototype called Ship 20.

You guessed it — the weed number again. At least that time, it was a "total coincidence!" according to a Musk tweet last month.

Musk has sometimes had a rocky relationship with the three digit numeral. Back in 2018, he joked (but not really) that he’d take Tesla private at a share price of $420 on Twitter. The comment resulted in a lawsuit from the Securities and Exchange Commission.

The billionaire appears to have an endless appetite for silly numbers. "Also, booster height was originally 70m, but we eliminated a half barrel for manufacturing efficiency, so now it’s…" Musk added in last month's tweet, a reference to 69, another jokey number.

Whether the pair of Raptor engines were intentionally lined up to form the number 420 is still unclear. Musk has yet to release an official statement regarding the incident. But if it was a coincidence, chances are he'll be delighted to find out.

Abso-Effing-Lutely
Free Speech Absolutist Elon Musk Discovers That Some Speech Is Unacceptable After All
Yesterday
Read More
Be Better
Elon Musk Reportedly Slashed the Team That Fights Child Sexual Abuse on Twitter
Thursday
Read More
Head Like A Hole
Elon Musk's Crying About Trent Reznor Shows That He Is a Big, Big Baby
Nov 23
Read More
+Social+Newsletter
TopicsAbout UsContact Us
Copyright ©, Camden Media Inc All Rights Reserved. See our User Agreement, Privacy Policy and Data Use Policy. The material on this site may not be reproduced, distributed, transmitted, cached or otherwise used, except with prior written permission of Futurism. Articles may contain affiliate links which enable us to share in the revenue of any purchases made.
Fonts by Typekit and Monotype.