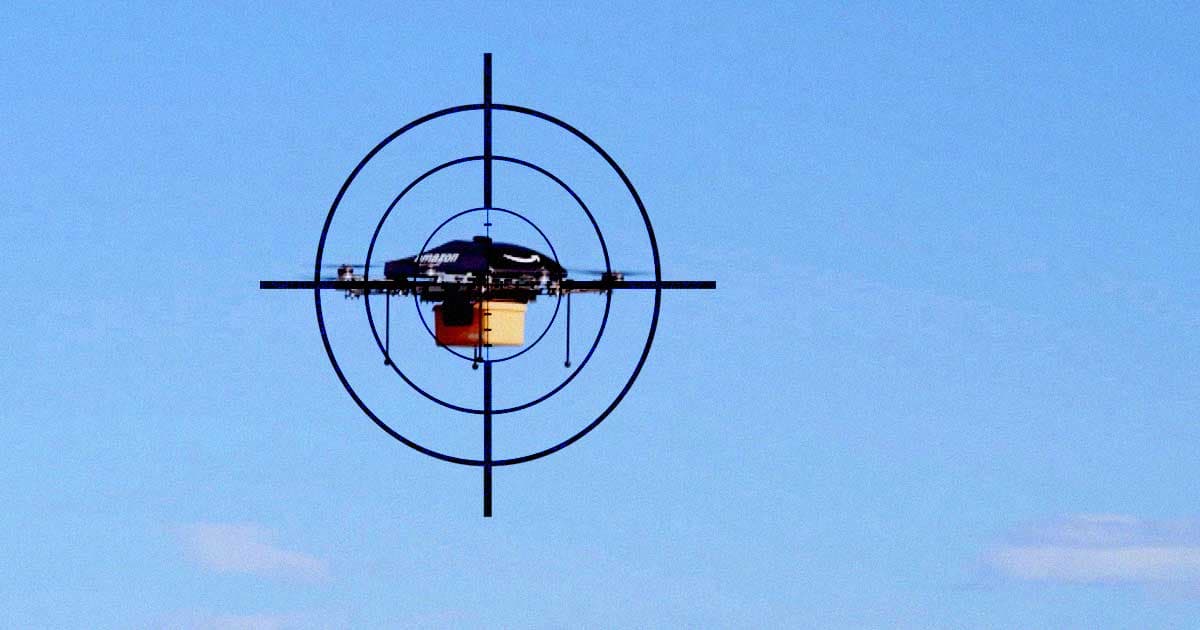 Local Residents Threaten to Shoot Amazon Drones Out of the Sky

"I think they’re going to wreck everything for us."

"I think they’re going to wreck everything for us."

Amazon announced earlier this month that it would be launching its long-anticipated drone delivery service, Prime Air, in Lockeford, California — which was news to many of the rural town's residents, many of whom went as far as to say that they'll shoot unwelcome delivery drones right out of the sky, The Washington Post reports.

"Target practice!" announced one unnamed resident, who the paper reports is the owner of an archery shop.

WaPo reports that Amazon alerted Lockeford officials to its plan about six months ago, though many residents had no idea until last week, when the rest of the country found out.

This is the latest in a long string of incidents in which shipping baron and death-defier Jeff Bezos' e-commerce organization has received community resistance to Amazon endeavors.

According to WaPo, residents of the Northern California town voiced several different reasons for their opposition to the drones. Some expressed employment concerns. Others pointed to potential privacy infringements, while others still cited a general mistrust of the controversial tech titan.

"I think they’re going to wreck everything for us," said area occupant Tim Blighton, who told the paper he'd previously threatened to shoot down a neighbor's drone.

Another resident, Naydeene Koster, was worried the delivery gadgets would scare livestock, perhaps to the point of self-harm.

"I’ve seen horses kill themselves over a flying balloon," she explained. "I’d hate to see the damage a flying drone would cause coming into their area."

Too Little, Too Late

It's worth noting that some community members were curious to see what the drones would look like in-action.

Prime Air has seen its fair share of upheaval since its initial 2013 announcement, from delayed roll-out and poor company morale, to obscured crash numbers, to an acres-wide Oregon fire caused by a defunct drone.

And, though an Amazon representative told WaPo that the flying devices will meet the FAA's "high safety bar," he also warned that "if someone did shoot down a drone they would have broken the law."

Read More: Amazon drones are coming to town. Some locals want to shoot them. [Washington Post]

More on unwelcome drones: Most of Company's Ethics Board Resigns in Disgust Over Taser-Wielding Drones

FROM THE DEPT. OF THINGS TO BUY
The Launch of Amazon Aware Is Making Sustainability More Accessible
Mar 2
Read More
From Our Partners
Stop Yelling At The TV With 15% Off This Apple TV Remote
11. 1. 21
Read More
From Our Partners
Get lower prices and future purchase credits with one click.
10. 27. 21
Read More
+Social+Newsletter
TopicsAbout UsContact Us
Copyright ©, Camden Media Inc All Rights Reserved. See our User Agreement, Privacy Policy and Data Use Policy. The material on this site may not be reproduced, distributed, transmitted, cached or otherwise used, except with prior written permission of Futurism. Fonts by Typekit and Monotype.