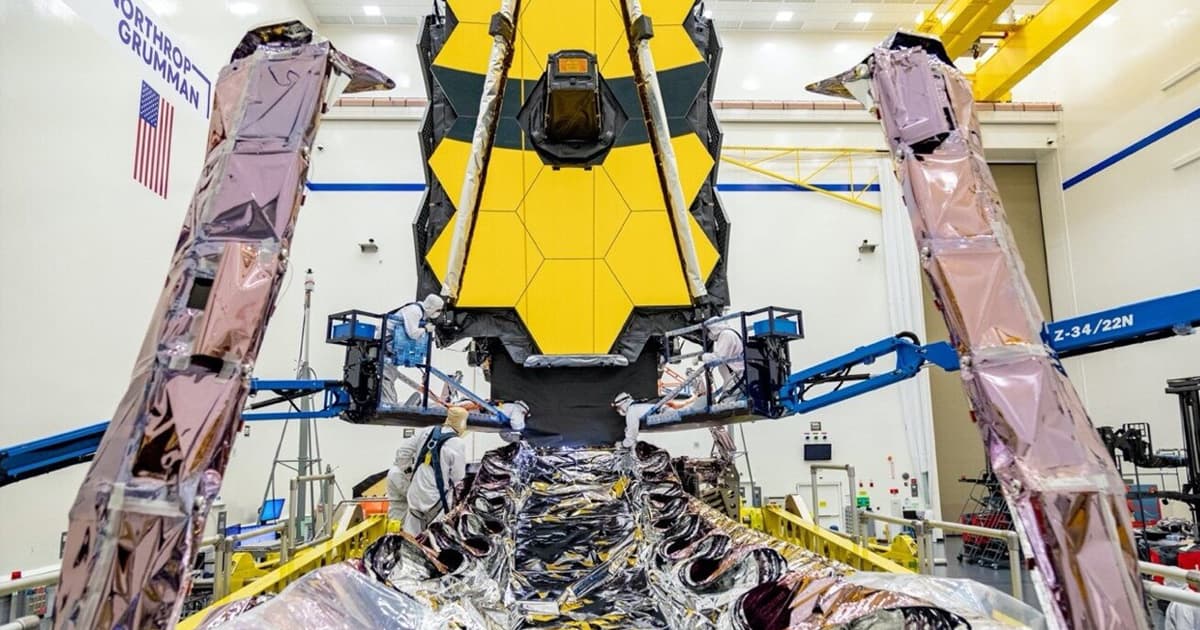 All it needs is some final touchups before it's packed into a rocket.

All it needs is some final touchups before it's packed into a rocket.

After decades of development — and delays — the James Webb Space Telescope is finally being prepped for launch.

The European Space Agency (ESA) has confirmed that the giant space telescope has arrived at its spaceport in French Guiana, a territory of France located on the northeast corner of South America. There, the spaceport's proximity to the equator will help the ESA's Ariane 5 rocket carry the telescope into orbit thanks to a slingshot effect from the Earth's rotation. Now, all that's left is to unpack, prepare, and make final touchups to the telescope before a planned launch this December.

Getting the telescope to its launch site was no simple matter. NASA had to ship it from California through the Panama Canal, leading the agency to become concerned about pirates nabbing the priceless cargo along the way. So NASA kept most of the details of the telescope's journey under wraps for security purposes, according to Inverse.

"Webb is an excellent example of international teamwork and cooperation," ESA Director of Space Transportation Daniel Neuenschwander said in the announcement. "We welcome Webb and our partners to Europe's Spaceport in French Guiana to continue this adventure towards a thrilling liftoff on board Ariane 5 and to sharing the many Webb science breakthroughs to come!"

Not everyone is thrilled with the new orbital observatory. Over 1,200 researchers, NASA employees, and otherwise concerned onlookers have signed a petition asking NASA to change the Webb's name due to former NASA Administrator James Webb's track record of persecuting employees based on their sexuality.

NASA promised an investigation and then quietly decided that there wasn't enough of a reason to change the name, which only further incensed its critics — including astronomer Lucianne Walkowicz, who resigned as NASA advisor in protest.

It seems the James Webb name is sticking for now, but Walkowicz is refusing to refer to it as such, and is calling on other astronomers to do the same.