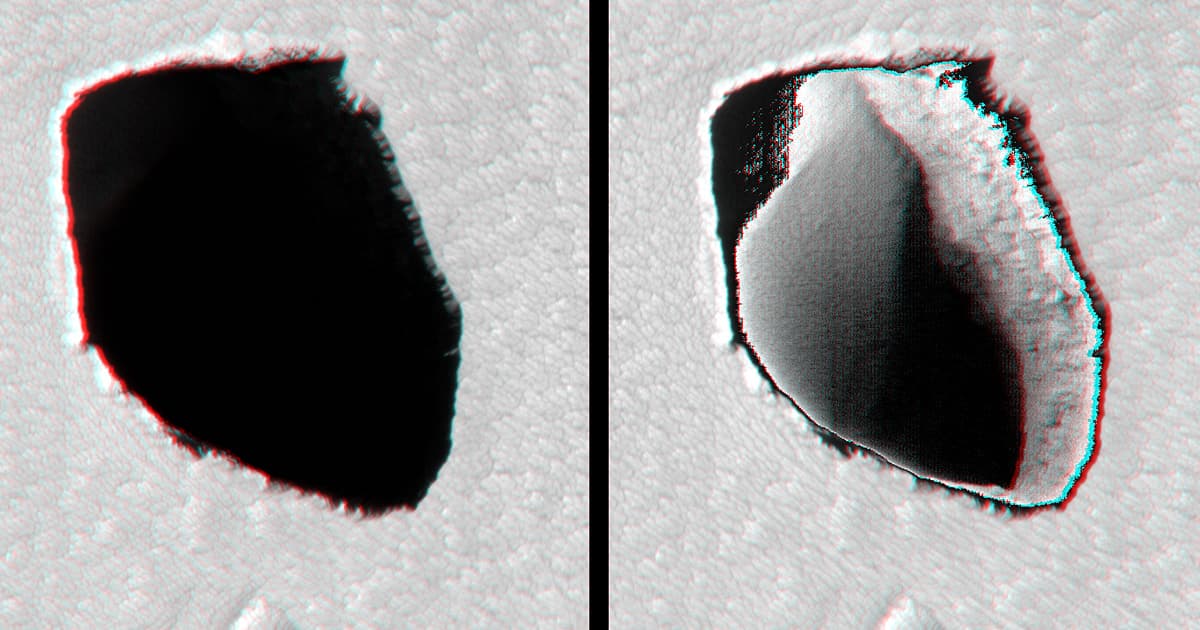 NASA's Mars Reconnaissance Orbiter spotted something rather strange on the Martian surface below: a deep pit, appearing in the form of a black spot of darkness roughly 180 meters across in images taken by the orbiter's HiRise camera.

After adjusting the brightness of the image, which was originally taken on January 24, the results took the HiRise team at the University of Arizona by surprise. "The floor of the pit appears to be smooth sand and slopes down to the southeast," NASA geophysicist Ross Beyer wrote in a blog post last week.

There's an intriguing possibility about the hole. The scientists behind the discovery are now trying to figure out if the deep pit could be connected to a network of underground tunnels left behind by fast flowing channels of lava — much like the ones found in Hawaii's Volcanoes National Park.

Researchers have long suspected that ancient volcanoes may have left behind large cavernous lava tubes on the surface of Mars. In fact, some of these suspected caverns could be big enough to house entire planetary bases, providing future human settlers protection from the harsh environment on the Martian surface above.

"The hope was to determine if this was an isolated pit, or if it was a skylight into a tunnel, much like skylights in the lava tubes of Hawai’i," Beyer wrote. "We can’t obviously see any tunnels in the visible walls, but they could be in the other walls that aren’t visible."

NASA's spacecraft have spotted possible skylights like the one Beyer describes. In 2012, for instance, the MRO took photos of suspected cave skylights up to 225 meters across.

Luckily, NASA is already working on flying drones that could eventually be used to map these caverns in the future — because one thing is clear: a rover like Perseverance isn't likely to survive a tumble into a giant pit of darkness.