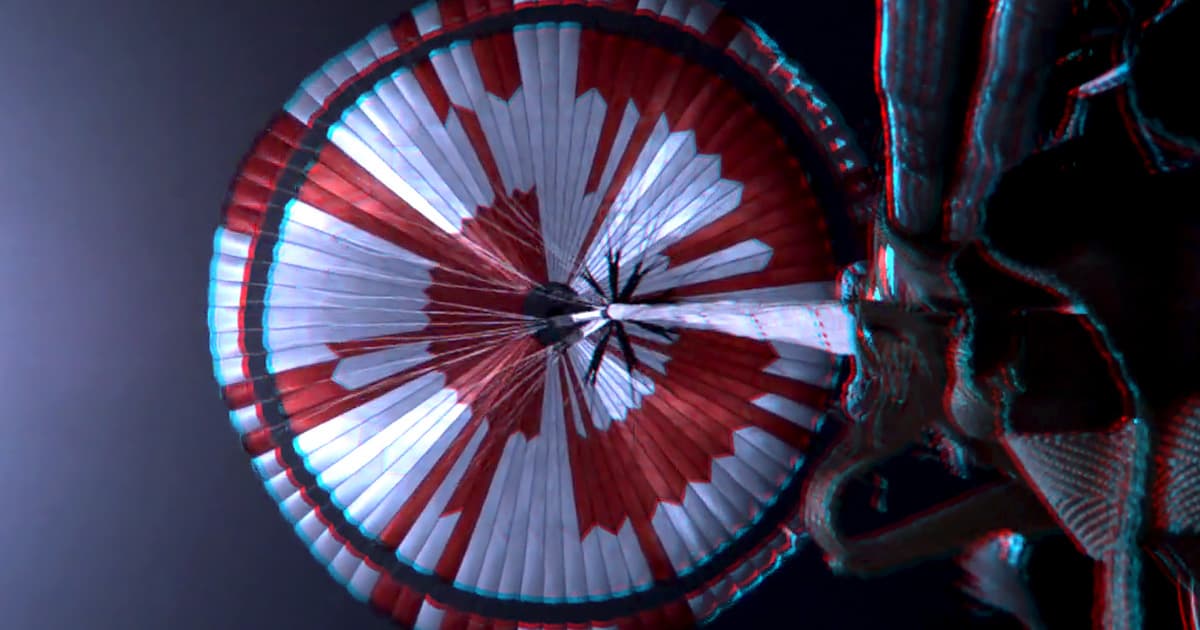 The colors are the key.

The colors are the key.

The engineers at NASA's Jet Propulsion Laboratory (JPL) managed to hide a clever message in the red and white colors of the Perseverance rover's parachute that it used to successfully land on Mars late last week.

An incredible video uploaded by NASA showed Perseverance screaming through the thin Martian atmosphere below before opening its parachute and deploying its Skycrane to gently lower the car-sized rover to the Martian surface.

NASA teased that there was a secret message encoded in the various red and white stripes of the rover's parachute — and luckily, French computer science student Maxence Abela and his father have now decoded it.

The message reads "Dare mighty things," a popular JPL slogan. The outer rings are the GPS coordinates of the JPL offices in Pasadena, California.

"There are four groups, each one is built from a circle, starting from the center circle," Abela wrote in a tweet explaining JPL's code. "Each binary number encodes a position in the alphabet, starting at 1."

A (partial) explanation of the code in Perseverance's parachute, cracked by @FrenchTech_paf with a contribution by @pramirez624.

Can you decipher the final message? pic.twitter.com/DO8sj9fEdw

TikTok user and scientist Emily Calanderelli also took the time to distill the dense explanation into a fun video, in case you're (understandably) confused.

So you know how NASA sent a secret message to Mars?@FrenchTech_paf figured it out. 🙌🏼

It's not the first encoded message of its kind, as CNET points out. The wheels of NASA's Curiosity Mars rover are designed to spell out "JPL" in Morse code as it makes its way across the desolate surface of Mars.