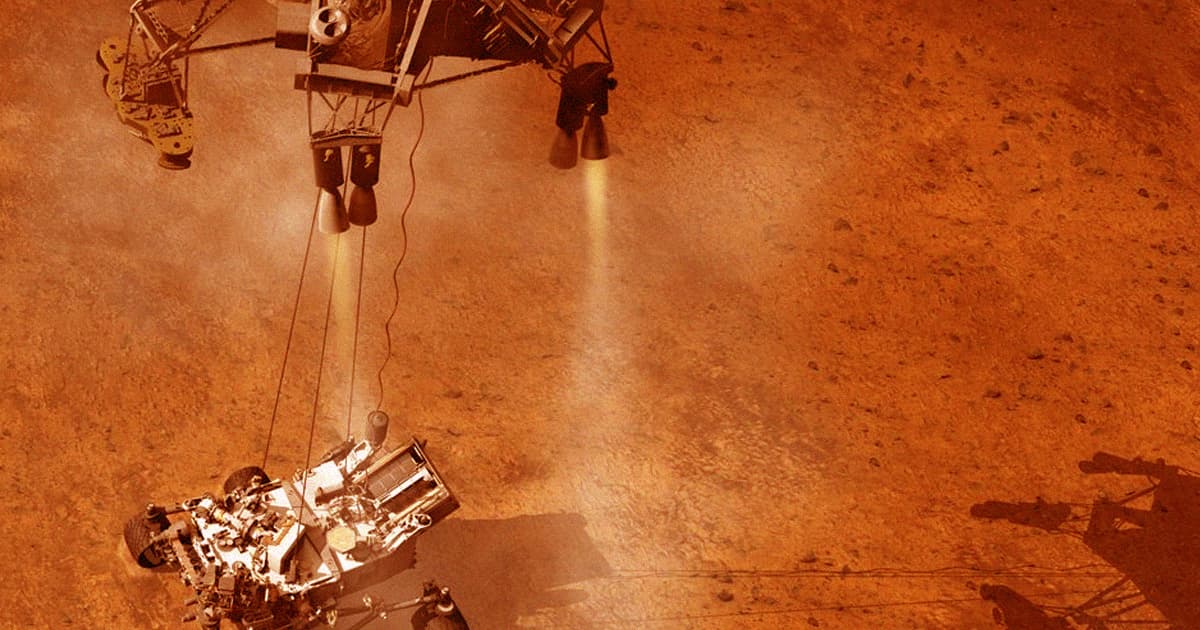 You can see the rover dangling high above the Martian surface.

You can see the rover dangling high above the Martian surface.

NASA has released a new photo sent to us all the way from Mars courtesy of its Perseverance rover, which successfully landed on the Red Planet on Thursday.

The incredible image shows the rover hanging below the probe's "sky crane," a rocket-powered device that lowered Perseverance from an altitude of about 70 feet down to the surface below. A similarly designed crane also was used to lower NASA's Curiosity rover during its 2012 landing.

The moment that my team dreamed of for years, now a reality. Dare mighty things. #CountdownToMars pic.twitter.com/8SgV53S9KG

The image shows a stunning amount of detail, capturing not only the entire top side of the rover itself, but also the craggy Martian surface below.

"This shot from a camera on my 'jetpack' captures me in midair, just before my wheels touched down," the rover's official Twitter account wrote.

"This is something we've never seen before," Aaron Stehura, a systems engineer at JPL, said of the jetpack image during today's live stream. "It was stunning and the team was awe struck."

NASA also released a full color resolution version of the surrounding Jezero Crater, as taken by the rover's hazard camera it uses to safely navigate the surface.

An additional image shows one of the rover's wheels close up.

During a Friday briefing, the team at NASA's Jet Propulsion Laboratory noted that Perseverance is doing well. The rover "continues to be highly functional and awesome and I'm exhilarated," an excited Pauline Hwang, mission operations system manager for the Perseverance Mars rover at JPL, said during today's press conference.

Perseverance will now transition to using surface software to check its various instruments and eventually begin its journey across the Martian surface.