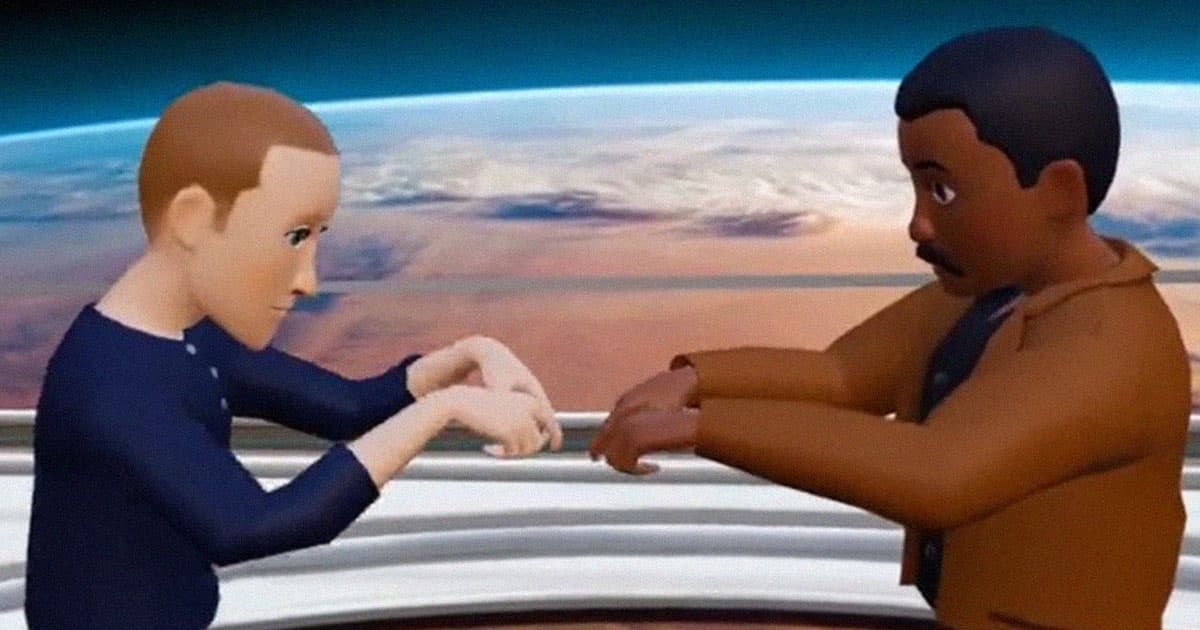 No Legs to Stand On

"How could anyone possibly compete with this."

"How could anyone possibly compete with this."

Facebook's awkward foray into virtual reality drags on — and this time, the company has roped astrophysicist and noted sad boy Neil deGrasse Tyson into its attempts to sell the concept.

While the science behind the images is undoubtedly fascinating, deGrasse Tyson and Zuckerberg's jittering and bug-eyed avatars suck up all the attention. An awkward fist bump between the two, with limp wrists awkwardly hovering in mid-air, only adds to the disillusion. Just look at these monstrosities:

"How could anyone possibly compete with this," Financial Times tech reporter Dave Lee responded to an awkward screenshot of the two "fist bumping."

"Imagine a future with worse graphics than Wii Bowling and none of the fun," mused fellow journalist Elle Hardy.

Of course, Zuckerberg took the opportunity to shill his half-baked "Metaverse" — which, as of right now, amounts to a confusing network of apps and online spaces that can only be visited through the company's increasingly expensive virtual reality goggles.

Those space aren't exactly teeming with people right now. In fact, the company is already facing major headwinds during its major pivot to VR, with Meta's hardware division scaling back spending significantly.

When asked by Zuckerberg what he thinks "of this whole experience," deGrasse Tyson didn't really have any actual feedback to give.

"Any place you hadn't gone before, because you couldn't, or you just would read about it, if you get to go inside, I don't see why that wouldn't be the next best thing," he said, playing into Zuckerberg's, uh, hand by arguing that the "applications are limitless, clearly."

Meta Material
Christmas Present VR Headset Sends Boy to the Hospital
Jan 2
Read More
Stay at Home
Facebook Is Taking Down Pages Organizing Anti-Quarantine Protests
4. 20. 20
Read More
Facebook Mind Reader
Facebook is Making Progress on Its Mind Reading Headset
7. 30. 19
Read More
+Social+Newsletter
TopicsAbout UsContact Us
Copyright ©, Camden Media Inc All Rights Reserved. See our User Agreement, Privacy Policy and Data Use Policy. The material on this site may not be reproduced, distributed, transmitted, cached or otherwise used, except with prior written permission of Futurism. Articles may contain affiliate links which enable us to share in the revenue of any purchases made.
Fonts by Typekit and Monotype.