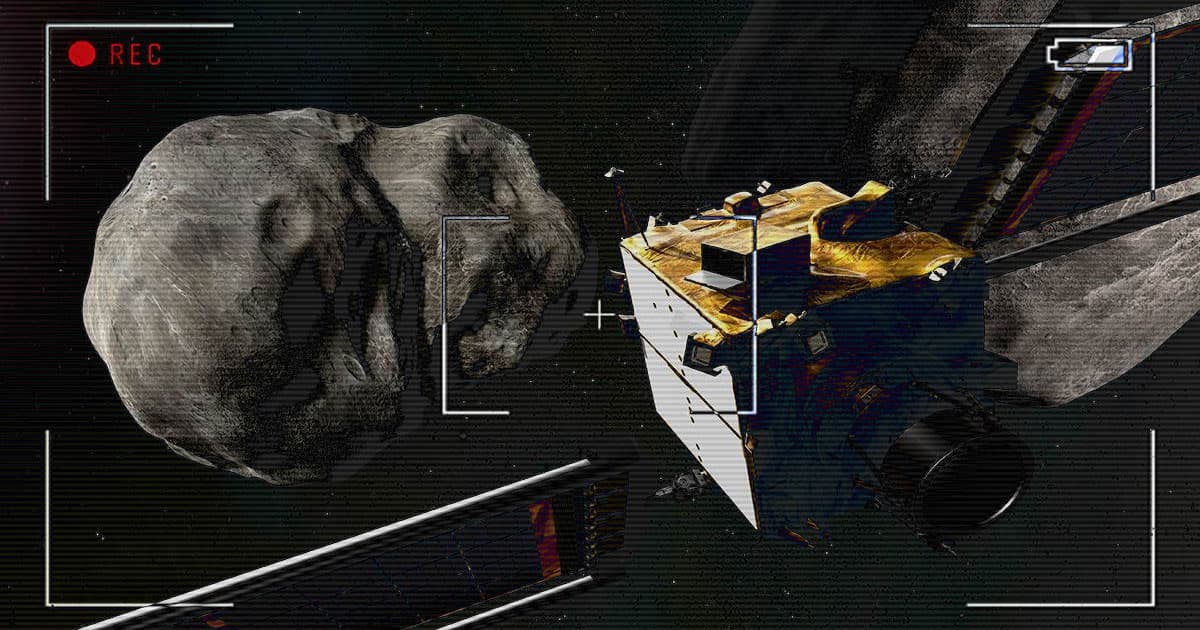 Guardians of the Galaxy

Every hero needs a sidekick. Or, at the very least, a personal videographer.

Case in point: NASA's asteroid-smashing Direct Asteroid Redirection Test (DART) spacecraft, slated to crash into the asteroid Dimorphos on September 26, is currently racing towards its target. But it's not alone! Space.com reports that trailing behind the doomed DART craft is a tiny Italian micro-satellite, which, equipped with two optical cameras, will transmit real-time footage of the collision for Earthbound scientists.

The small Italian craft, dubbed the Light Italian Cubesat for Imaging of Asteroids, or LICIACube, piggybacked its way into space when DART was launched late last year. But we all must fly alone eventually, and on Sunday, LICIACube was deployed from the main craft.

If it's giving big-dog-driving-the-motorcycle-with-little-dog-in-the-sidecar-energy, we concur. Basically: DART will smash into moonlet Dimorphos, which orbits the asteroid Didymos. LICIACube, hovering closeby — but not too closeby — will watch what happens.

"The cubesat will point its cameras toward the asteroid system," Elena Mazzotta Epifani, an astronomer at Italy's National Institute for Astrophysics (INAF), told Space.com, "but also to DART, and will probably take some pictures of it."

Hopefully, LICIACube will reveal a wealth of information about the unprecedented collision, nevermind the asteroids themselves. Very little is actually known about this asteroid system — so this little cosmic camcorder might just reveal some new, exciting truths about these and other rocks floating through our solar system.

"We do not know almost anything about Dimorphos, which is too small to produce an effect disentangled from the one coming from the main body," Epifani told Space.com. "We presume from theoretical models on formation of binary asteroids that Dimorphos is very similar to Didymos, but we know virtually nothing about the degree of cohesion of surface materials, the size distribution of the surface debris, and so on."

"Together, DART and LICIACube will analyze for the first time and with high detail the physical properties of a binary near-Earth asteroid," she continued, "allowing us to investigate its nature and have hints on its formation and evolution."

Exciting stuff! One thing's for sure: we'll be watching. Word's still out on Bruce Willis, though.

READ MORE: NASA will slam a spacecraft into an asteroid. This tiny witness will show us what happens. [Space.com]

ET Germs
Stanford Scientist Warns of Risk From Alien Pathogens
5. 8. 20
Read More
Hulk Smash
NASA Scientist: Asteroid Deflection Mission Not Like "Armageddon"
1. 2. 19
Read More
NASA is Moving Forward With Its Plan to Deflect an Asteroid From Earth
7. 7. 17
Read More
+Social+Newsletter
TopicsAbout UsContact Us
Copyright ©, Camden Media Inc All Rights Reserved. See our User Agreement, Privacy Policy and Data Use Policy. The material on this site may not be reproduced, distributed, transmitted, cached or otherwise used, except with prior written permission of Futurism. Articles may contain affiliate links which enable us to share in the revenue of any purchases made.
Fonts by Typekit and Monotype.