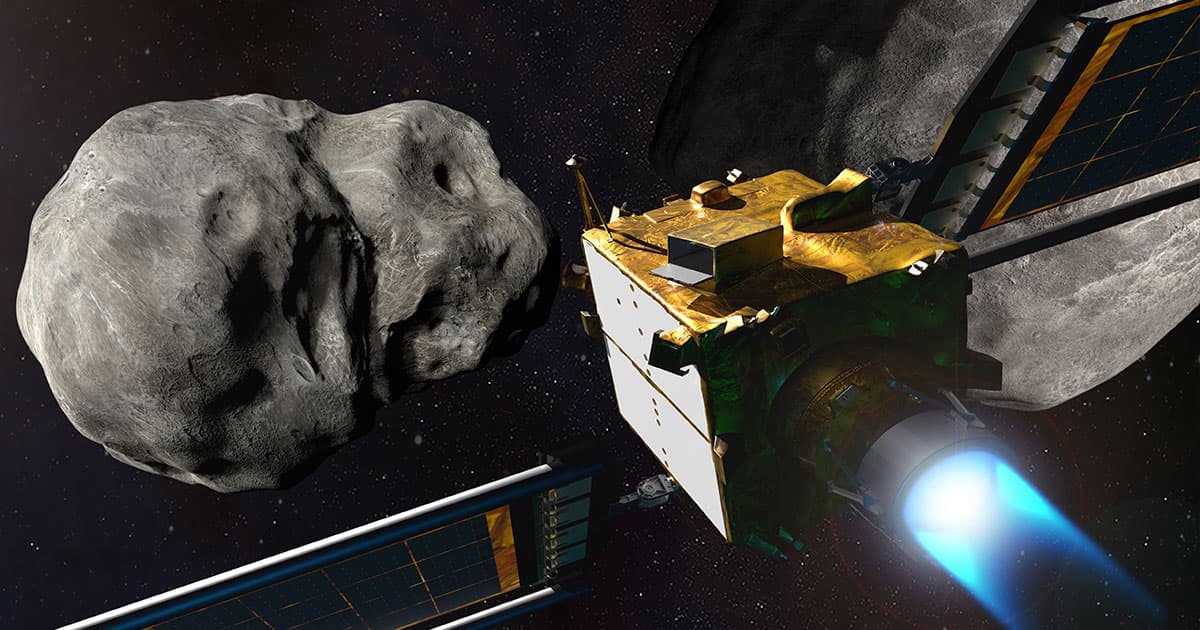 Red Alert! NASA Is About to Test Deflecting a Killer Asteroid

Take that, space rocks! NASA has announced that its first and long-awaited planetary defense test mission — which, yes, will trial a system developed to deflect potentially Earth-threatening asteroids or comets — is slated to smash into an unlucky asteroid next month, in September.

The mission, dubbed the Double Asteroid Redirection Test (DART), will be the first ever to test whether a high-speed impact could nudge a killer asteroid off course before it hits our planet. But don't worry — the asteroid Dimorphos "poses no threat to Earth," a detail that the agency has been almost comically careful to hammer into all its marketing materials.

Interestingly, DART is actually being sent to two off-world rockos: asteroid Didymos, which clocks in at roughly a half mile in diameter, and its smaller, orbital moonlet, Dimorphos. And while the duo — technically called a binary asteroid system — currently present no threat to our planet (which, again, NASA really wants you to know), they're plausible targets because they have come pretty close to us before.

Despite its adorable name and smaller stature, NASA intends for DART to crash into Dimorphos — the agency believes that they'll be able to more easily measure DART's efficacy by targeting the moonlet, as they can measure any changes in the smaller body's orbit around Didymos from here on Earth.

If all goes to plan, the craft will collide with the moonlet at a cool 15,000 miles per hour. And as CBS News points out, the mission, unlike the film "Armegeddon," isn't to destroy the celestial body. Dimorphos won't be blown up... just, uh, dented. Maybe. And hopefully nudged off course.

"This test will show a spacecraft can autonomously navigate to a target asteroid and intentionally collide with it to change the asteroid’s motion in a way that can be measured using ground-based telescopes," reads NASA's press release. "DART will provide important data to help better prepare for an asteroid that might pose an impact hazard to Earth, should one ever be discovered."

READ MORE: How to watch as NASA sends a spacecraft to deliberately crash into a 525-foot-wide asteroid at 15,000 mph (CBS News)

Asteroid Armageddon
The "Space Nation" Warns That an Asteroid Could Wipe out Humanity
4. 8. 19
Read More
NASA is Moving Forward With Its Plan to Deflect an Asteroid From Earth
7. 7. 17
Read More
Russia's Ballistic Missiles Versus Asteroid Apophis
2. 22. 16
Read More
+Social+Newsletter
TopicsAbout UsContact Us
Copyright ©, Camden Media Inc All Rights Reserved. See our User Agreement, Privacy Policy and Data Use Policy. The material on this site may not be reproduced, distributed, transmitted, cached or otherwise used, except with prior written permission of Futurism. Articles may contain affiliate links which enable us to share in the revenue of any purchases made.
Fonts by Typekit and Monotype.