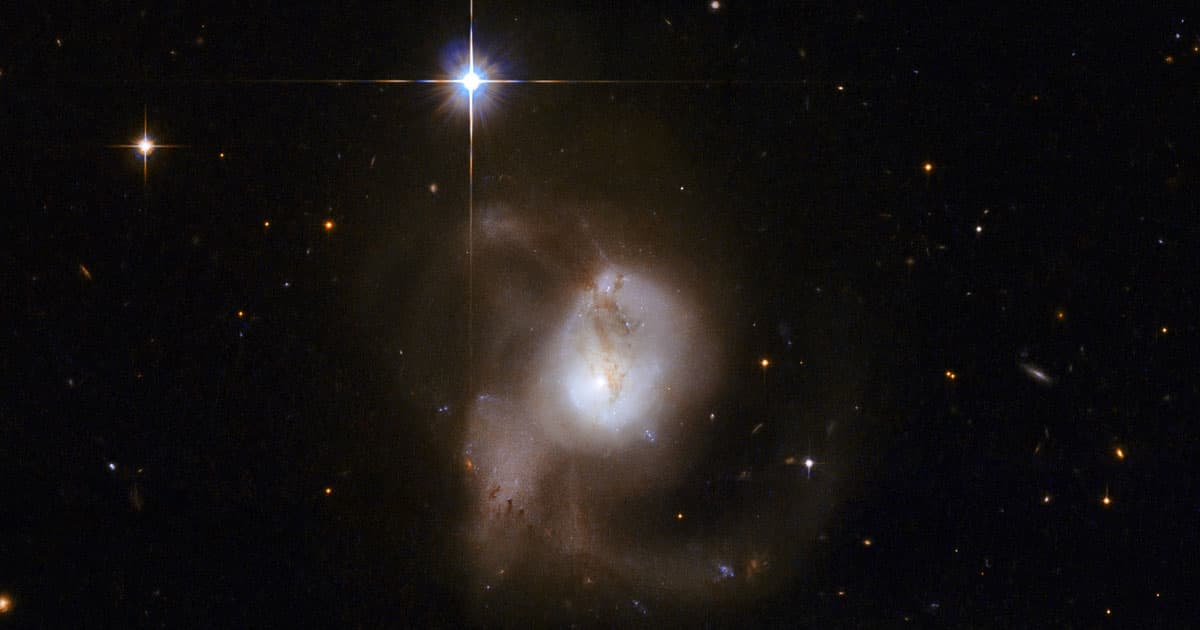 The urge to merge.

The urge to merge.

NASA is throwing shade at some colliding galaxies as they merge into what's known as "interacting galaxies," which is astrophysics speak for when galaxies, uh, collide.

"This galaxy is kind of a hot mess," NASA's Hubble Space Telescope tweeted in reference to galaxy ESO 239-2, which is located a cool 550 million lightyears away from Earth.

The account noted that eventually, galaxy ESO 239-2 — likely the result of merging galaxies located in the "Grus" or Crane constellation that can sometimes be seen in North America's southern sky — will take on an elliptical shape "like a stretched-out circle."

This galaxy is kind of a hot mess.

At 550 million light-years away, ESO 239-2 is likely the result of merging galaxies that will become an elliptical galaxy: shaped like a stretched-out circle.

For now, it’s in a messy intermediate stage: https://t.co/VO1c5CCaqj#HubbleClassic pic.twitter.com/ikxA5pg4Ux

Though it sounds dramatic, galactic collisions are actually pretty common. As Harvard's Center for Astrophysics noted, researchers have "discovered that as many as 25 percent of galaxies are currently merging with others."

As it turns out, galactic collisions are pretty important, too. In 2019, astronomers at the Rochester Institute of Technology hypothesized that the Milky Way was actually created when its proto-galaxy collided with the newly-discovered Antlia 2 galaxy, which was found to be orbiting ours. The RIT researchers argued that this collision could explain the mysterious ripples found on the Milky Way's outer rim — and possibly help explain the existence of dark matter.

There's a million imaginative directions we could take with something like the "hot mess" that is the ESO 239-2 galaxy. Is it home to new worlds, new particles — or just another vast expanse of the unknown?

More on galactic collisions: Astronomers: Something Is Warping Our Entire Galaxy

Woooaaah
Scientists: The Human Brain Has Odd Similarities to the Entire Universe
11. 17. 20
Read More
Dark Matter Mystery
Dark Matter's Effect Is 10x What It Should Be, Scientists Say
9. 11. 20
Read More
Really Really Really Old
Astronomers Puzzled By Ancient Milky Way-Like Galaxy 12 Billion Light-Years Away
8. 13. 20
Read More
+Social+Newsletter
TopicsAbout UsContact Us
Copyright ©, Camden Media Inc All Rights Reserved. See our User Agreement, Privacy Policy and Data Use Policy. The material on this site may not be reproduced, distributed, transmitted, cached or otherwise used, except with prior written permission of Futurism. Fonts by Typekit and Monotype.