Dark Matter's Effect Is 10x What It Should Be, Scientists Say

Well, this is weird. 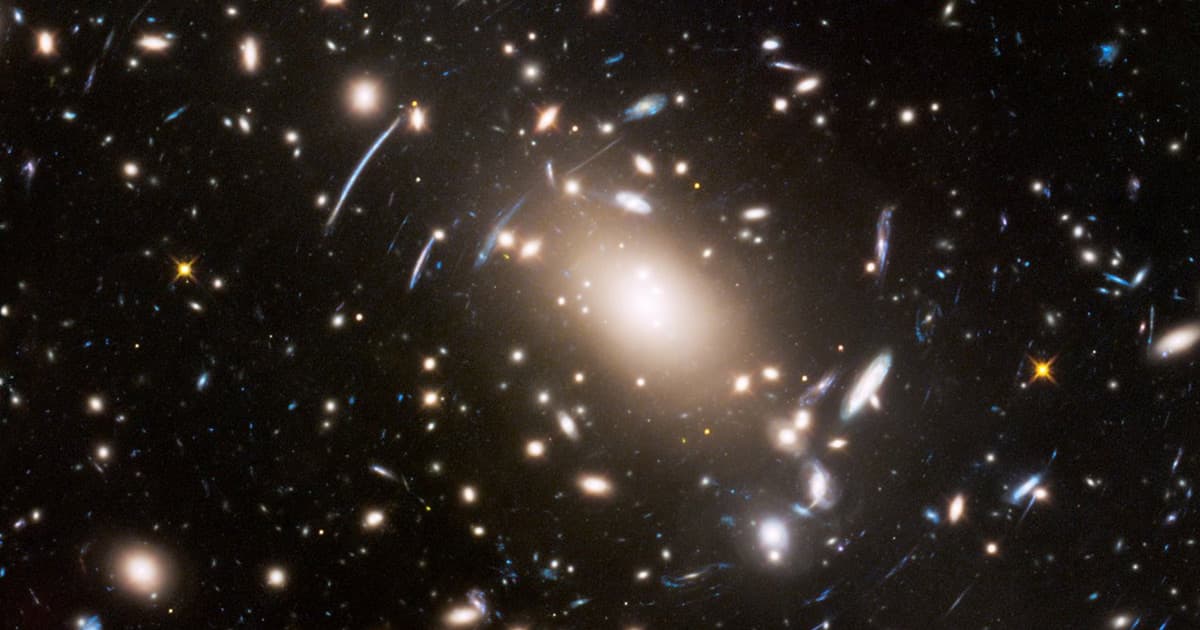 According to new research, dark matter may be an even bigger mystery than previously believed.

The stuff is thought to make up a significant percentage of the mass of the universe — yet it's near impossible to study, let alone observe.

Physicists have had to resort to studying the way dark matter bends light between distant sources such as a galaxy and the observer, an effect called "gravitational lensing." The higher the concentration of dark matter, the more pronounced the effect.

But when a team of European researchers looked at data from the Hubble Space Telescope and the Southern Observatory's Very Large Telescope, they found that the gravitational lensing effect around massive structures called "galaxy clusters" was ten times as strong as predicted by simulations.

"We have done a lot of testing of the data in this study, and we are sure that this mismatch indicates that some physical ingredient is missing either from the simulations or from our understanding of the nature of dark matter," said Massimo Meneghetti, of the INAF-Observatory of Astrophysics and Space Science of Bologna in Italy and lead author of a paper about the research published today in the journal Science, in an ESA statement.

In other words — we're missing a key ingredient.

"One possible origin for this discrepancy is that we may be missing some key physics in the simulations," Meneghetti said in a NASA statement.

To conduct their research, Meneghetti's team produced a "dark-matter map" using observations from of a sample of three massive galaxy clusters.

They discovered something unexpected: smaller-scale images nested within larger lens distortions in each galaxy cluster's core. In other words, the gravitational lensing effect was significant, leading them to believe they had stumbled upon dense concentrations of dark matter.

The discrepancy highlights just how little we know about the mysterious stuff that appears to make up most of the known universe.

READ MORE: Dark matter might be even stranger than we thought, according to Hubble [Digital Trends]

Read This Next
Dark Secrets
Scientists Just Detected the Oldest Dark Matter Ever Observed
Walled Up
Scientists Say Space Is Filled With Invisible Walls
Turn Back Time
Scientists Say There May Be a Mirror Universe in Which Time Runs Backwards
Into Darkness
Inside NASA's Bold Proposal to Probe the Mysteries of Dark Matter
Martian Ammonia
NASA Rover Detects Organic Molecules on the Surface of Mars
More on Hard Science
It From Bit
Nov 22 on the byte
A Scientist Is Crowdfunding an Experiment to Check if We Live in a Simulation
Water Carrying
Nov 20 on the byte
Evidence Grows That Soggy Meteorites Gave Earth Its Oceans
Shroom News
Nov 20 on the byte
Scientists Build Circuit Boards Based on Mushrooms
READ MORE STORIES ABOUT / Hard Science
Keep up.
Subscribe to our daily newsletter to keep in touch with the subjects shaping our future.
+Social+Newsletter
TopicsAbout UsContact Us
Copyright ©, Camden Media Inc All Rights Reserved. See our User Agreement, Privacy Policy and Data Use Policy. The material on this site may not be reproduced, distributed, transmitted, cached or otherwise used, except with prior written permission of Futurism. Articles may contain affiliate links which enable us to share in the revenue of any purchases made.
Fonts by Typekit and Monotype.