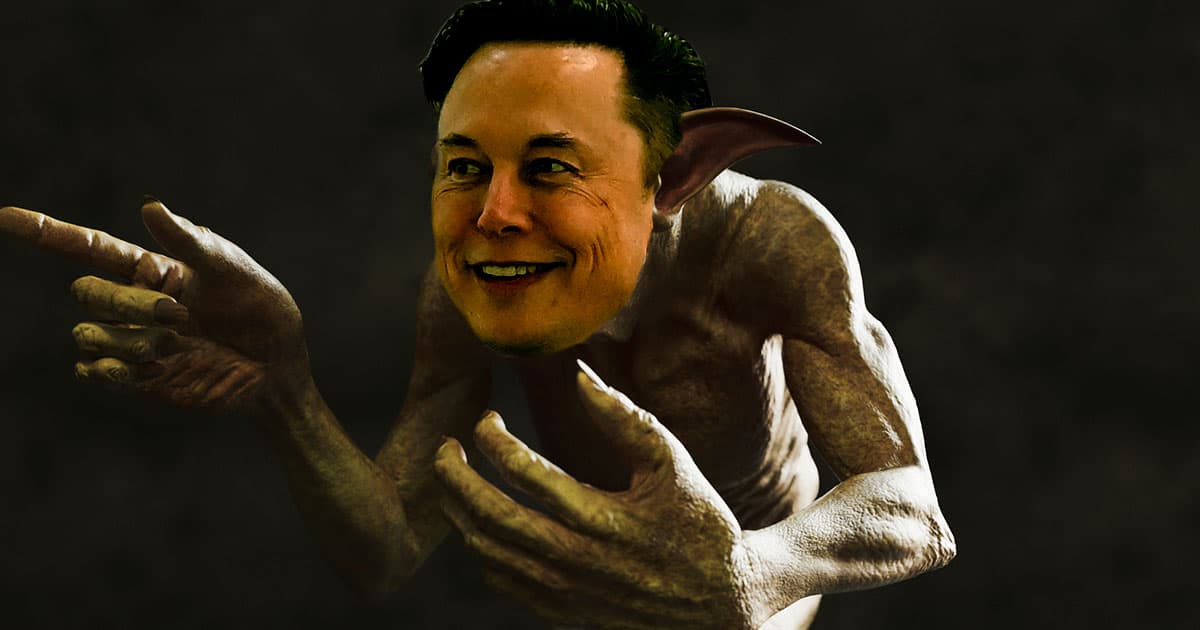 We Regret To Inform You That Elon Musk, Unfortunately, Knows About “Goblin Mode”

In a since-deleted tweet, the Tesla and SpaceX CEO posted an uncredited meme of the “Breaking Bad” and “Better Call Saul” lawyer character Saul Goodman, with the caption: “In all fairness your honor, my client was in ‘goblin mode.'”

For those living in blessed ignorance, “goblin mode” is a comedic term for giving up on hygiene and normal social interaction. It hit the mainstream last month, when a later-debunked article claimed that Kanye West’s then-girlfriend Julia Fox said that the Chicago rapper didn’t like it when she “went goblin mode.”

Though Fox claims to have never actually said anything about going goblin mode, the term clearly struck a chord.

Its meaning is quite subjective, but generally invokes images of a slobby, depressed person, who isn’t interested in maintaining their appearance — y’know, like a goblin.

Is Musk suggesting he has entered a similarly disheveled and unkempt state, excusing his latest erratic behavior? First, he announced he had joined Twitter’s board — only to back off a day later.

At the very least, he’s signaling familiarity with the concept. And to be fair, he has previously claimed to live in a small prefab box, and has been known to sleep under his desk and wear the same outfit day after day.

But perhaps it’s best not to read too far into it. For one, Musk posting stolen memes is par for the course. But the timing of this specific tweet — a mere day after he declined to join Twitter’s board of directors following his purchase of nine percent stock in the company — has suggested to institutions as storied as The New York Times that it may have a deeper meaning.

Axios‘ analysis also concluded that “Musk’s ‘goblin mode’ is here to stay” after he refused the seat at the table.

More likely than not, Musk just posted the meme because he saw and thought it was funny — the same way any of us who are inclined to post memes would.

But because he’s the world’s richest man, the CEO of multiple high-powered businesses and, now, Twitter’s largest shareholder, everyone’s looking at his shitposts with a microscope — which is probably exactly what he wants us to do.

More on Musk: There’s a Very Interesting Theory About Why Elon Musk Bought 9% of Twitter

The Saga Continues
SpaceX President Defends Elon Musk Against Sexual Misconduct Claims
Yesterday
Read More
Thanks Man!
After Sexual Allegations, Elon Musk Jets Off to Brazil
May 20
Read More
Wait Wait
Elon Musk Has a Ridiculous Excuse for Why He Suddenly Doesn’t Want to Buy Twitter
May 17
Read More
+Social+Newsletter
TopicsAbout UsContact Us
Copyright ©, Camden Media Inc All Rights Reserved. See our User Agreement, Privacy Policy and Data Use Policy. The material on this site may not be reproduced, distributed, transmitted, cached or otherwise used, except with prior written permission of Futurism. Fonts by Typekit and Monotype.