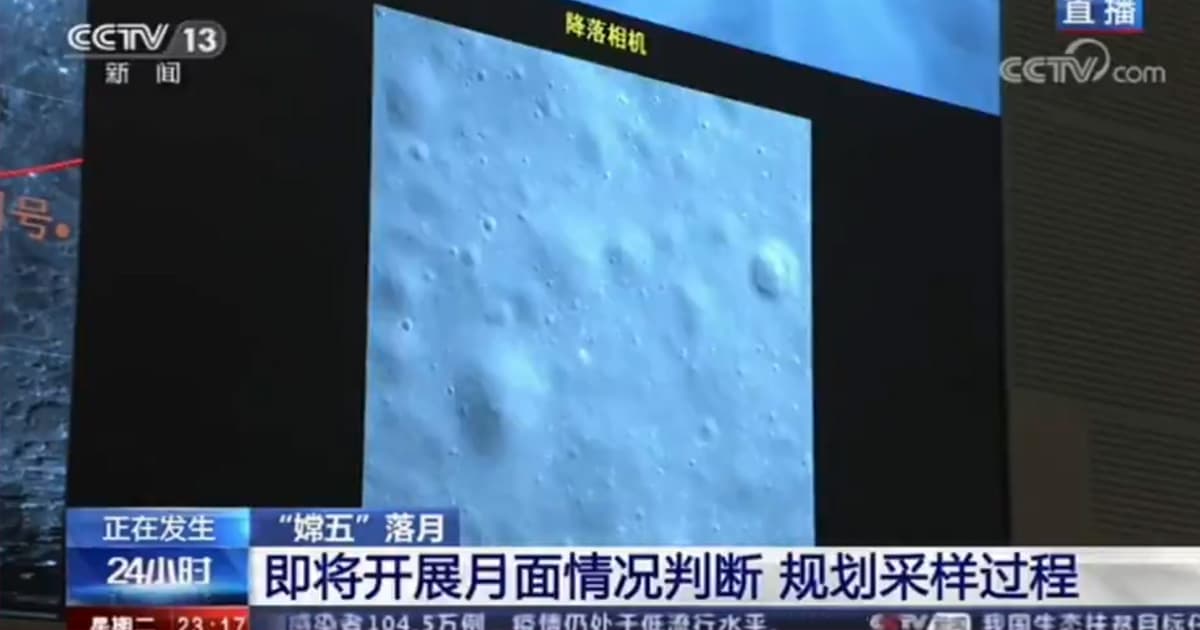 China Lands on Moon Before Returning to Earth With Lunar Rocks

China's Chang'e-5 mission successfully touched down on the Moon Tuesday.

While China's Chang'e-4 mission has been exploring the far side of the Moon for close to two years, this new mission will last less than one lunar day. Chang'e-5's robotic lander will spend just a few days on the Moon, The Verge reports, during which it's expected to dig up the first samples of lunar soil to be returned to Earth since the mid-1970s. If it succeeds, that would mean a wealth of new resources for scientists.

China is poised to become one of three countries to ever scoop up lunar samples and bring them back home. U.S. astronauts gathered up Moon rocks during its Apollo missions in the 1960s and 70s. Since then, the only lunar sample return mission has been the Soviet Union's Luna 24 lander in 1976 — a fully robotic mission that shows that Chang'e-5's ultra-ambitious Rube Goldberg machine plan to return lunar samples to Earth could succeed.

China expects Chang'e-5 to be back on the ground — on Earth this time — with its samples in hand by the end of December.

In order to get home, Chang'e-5 has to perform a complicated dance. The lander's robotic arm will scoop up samples and place them on top of an ascent module, according to The Verge. That module will then have to launch from the Moon to connect with another module that's still in orbit, which will then bring it back home to Earth.

If all goes to plan, it'll be an incredible lunar heist, giving scientists pristine samples to study with — and perhaps inspire NASA to be a little less stingy with its own supply.